Thousands of Nigerians who have fled attacks by Islamist militant group Boko Haram are crowded into Minawao refugee camp in Cameroon’s Far North Region, living in increasingly squalid conditions and at risk of contracting measles and other diseases, according to relief agencies.

The camp’s population over the past four weeks has risen from 6,000 to 15,000, says the UN Refugee Agency (UNHCR), putting a severe strain on camp services.

“The population has reached a level where more urgent actions need to be taken to build more tents and provide sanitation facilities such as toilets and new wells,” said Muhamat Alhidi, UNHCR’s camp site manager.

There are 110 functioning toilets in camp, meaning each, on average, is shared by 136 people. The international standard for emergency settings such as refugee camps is one latrine for every 50 people. There are plans to construct an additional 500 latrines, and to set up additional tents.

Around 9,000 of the residents now live in communal tents which hold 100 people each, or in 14 classrooms.

“I wonder what will become of us when we already go for days without [adequate] drinking water and all toilets are full. Everywhere in the camp is faeces,” said Konye Shetima from Borno State.

The camp - the only one in Far North Region - is just outside Jagala village in Mokolo District.

Access to water is a major problem. When IRIN visited the camp none of its three water points were working properly and trucked-in water was insufficient, forcing women and children to walk 1.5km to the nearest water point in Jagala village. Alhidi said a private company had been contracted to build more boreholes and repair wells in the camp and the nearby village.

Konye Shetima and other women, wait hopefully for taps to flow. 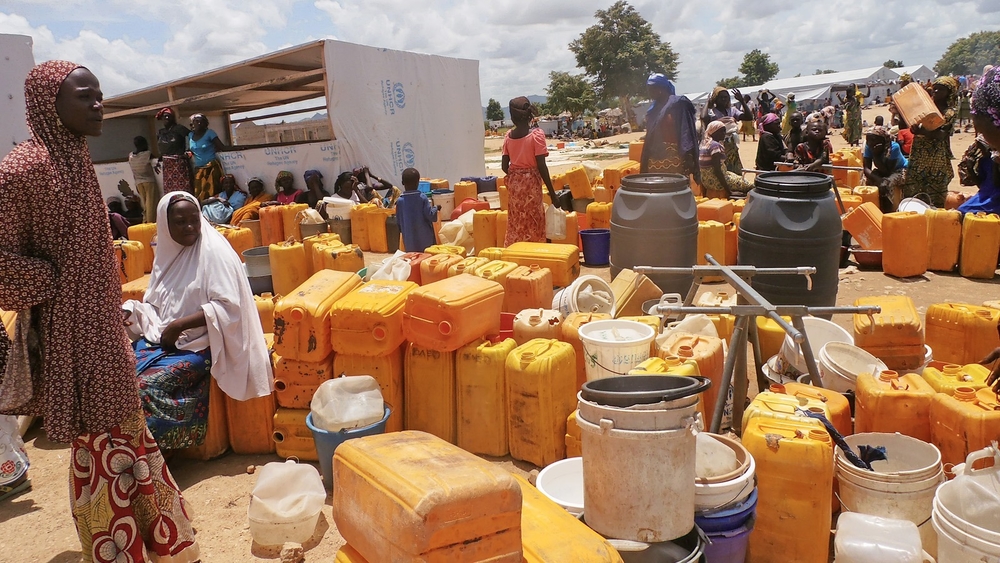 “We spend all day waiting in long lines hoping they will bring us water. We even leave our containers here in lines for days… Women suffer every day walking in search of water and when we come back our children are crying `Mama, Mama, I am hungry’,” Patima Muhamed, a 27-year-old woman, told IRIN.

“The toilets are all full and I take my children behind the tents to defecate. Adults have to go far into the bushes. We also go to the stream not far from here,” Mariam Unana, a 33-year-old mother of five, told IRIN. Unama comes from Bama District, Borno State. All the refugees in the camp are from Borno and Adamawa states, with most from Gwoza in Borno.

“The whole place stinks of excreta and when it rains, dirty water runs into the tents,” one aid worker, who preferred anonymity, told IRIN.

A measles outbreak is threatening children in the camp and nearby communities.

“A dangerous strain of measles was detected in children and immediately an outbreak was announced in the area,” Zra Moko, head of the Jagala community health centre, told IRIN.

UNICEF has launched a measles vaccination programme covering children aged six months to 15 years (instead of the usual age limit of 5 - globally, unvaccinated children under age 5 are most at risk of death, according to UNICEF).

“This is a particular case of measles outbreak, so effort is being done to eradicate it as much as possible, because [given] the living conditions, people might affect the effectiveness of the vaccines if the vaccines do not reach all children.”

Over 5,800 children in the camp were vaccinated against measles last week and the plan is to cover all communities in the Mokolo health district.

According to Kaoussiri Brekmo, the coordinator for disease control in the Maroua regional public health office, “cholera remains a threat to the camp population despite the fact that in the past two weeks all cases of cholera have been contained. Minawao camp had 52 cases of cholera with five deaths since July… We remain watchful against cholera because of the poor water and hygiene facilities in the camp and villages.”

A cholera outbreak in northern Cameroon between April and August killed at least 75 people.

Unana said all her children were with her in a communal tent. Her husband lives in a men’s tent and cannot help her with the children. Her oldest boy is 12.

“I fetch water, food and wood. The men don’t help us. All they do is sit under trees and wait for food. The water point pumps [in Jagala] are hard to operate but the men do not help us. Our husbands even beat us when women and children ask for money or support,” Unana said.

James Naga, a refugee and Christian community leader in the camp, said: “Most of us have lost the lives that we had been building for decades and have come to live in a place where you cannot provide for your own family. This is so frustrating to the men in particular.”