A shortage of viable evacuation centres in areas hit by Typhoon Haiyan (locally named Yolanda) has humanitarians and officials in the Philippines concerned that survivors will not have alternative accommodation in case of another one. The typhoon season usually lasts from June to November.

Haiyan, the category 5 super-typhoon that barrelled through central Philippines in November 2013, damaged or destroyed more than one million homes across an area roughly the size of Portugal, affecting more than five million people.

An IOM survey in 10 of the most affected towns in Eastern Samar and Samar, the two provinces hardest-hit by Haiyan, showed that only 53 of the 634 of pre-Haiyan evacuation centres identified by the government could be used in the event of another typhoon.

An estimated three million people have received emergency shelter assistance in the form of tents and tarpaulins, while about 675,000 received building and roofing materials to rebuild their own homes.

But two million people remain at risk without durable shelter, and experts fear the shortage of evacuation centres could make the next major storm even more dangerous.

Philippine laws mandate Local Government Units to identify or erect potential evacuation centres in the event of disaster. Public buildings such as churches, public schools and town halls have traditionally been designated as evacuation centres.

According to IOM data, there are 415 evacuation centres that are unusable due to Haiyan's damage and in need of repair, and 166 have been totally destroyed and will have to be rebuilt.

To address the situation, humanitarian organizations and local government authorities are scrambling to find “multi-solutions” to cover projected requirements for shelter and other needs in case of another catastrophic typhoon.

Private and public concrete buildings that are three or four stories high and at least 40 meters away from water zones - areas likely to flood - are being assessed by the government as possible alternative evacuation centres. Legally speaking, private building owners will still need to permit their building to be used as evacuation centres in the event of a disaster.

“Tents that have been used to house the displaced also need to be replaced,” said Navidad, noting that SPHERE shelter standards - global guidelines for humanitarian response quality - say tents should only be used for a period of three months.

Homes destroyed by Typhoon Haiyan in November 2013 in the Philippines have taken months to rebuild and many remain in ruin. 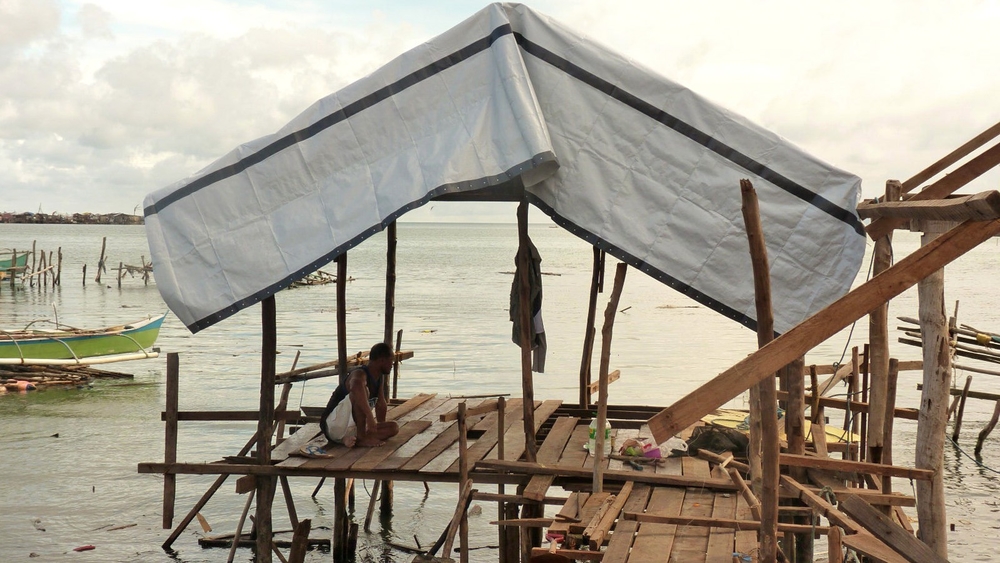 Aid organizations and local governments are also reviewing evacuation plans and conducting drills to inform residents about alternative evacuation centres, and prepare them in the event of another emergency. “Our [immediate] goal now is to save lives,” said Navidad.

“We are working with aid agencies and local governments to fast-track permanent shelter for those displaced in the 53 municipalities affected by Yolanda,” said Nestor Ramos, regional director of the Department of Social Welfare and Development (DSWD) .

He said the DSWD has already begun preparing for another emergency by stockpiling food and pre-positioning supplies for the affected areas in the region.

“Our challenge is a combination of many factors. There is the large number of affected families left without shelter, and the lack of resources available to rebuild structures,” Ramos said.

In the wake of Haiyan, the lack of building materials, such as corrugated sheets for roofing, was identified as an urgent need of the five million typhoon survivors.

“There was not enough supply of building materials then,” said Ramos. “We had to bring in everything from other areas in the Philippines or from outside. Now, it is still not enough.” Officials expect the shelter crisis to continue beyond 2014.

The weather bureau of the Philippine Atmospheric Geophysical and Astronomical Services Administration (PAG-ASA) has been monitoring the onset of El Niño, which brings warmer than usual temperatures in the ocean surface to the central and eastern equatorial Pacific, and could cause prolonged dry spells and intensified cyclones in the region.

In Guiuan, a city in Eastern Samar province where Haiyan first made landfall, there is still one tent city with 128 families in need of permanent shelter. “We cannot recover right away and cannot say we are 100 percent prepared. But [this area has] already been hit by four other typhoons since Yolanda and we’ve been okay,” said Guiuan mayor Christopher Gonzales.

The Philippines is one of the most disaster-prone countries in the world, with an average 20 typhoons each year. Since Yolanda struck in November 2013, six typhoons have hit the island nation.

“We’re doing the best we can, with what we have,” said Gonzales. “We can only hope for the best and continue with prayers.”.