Anwar Ahmed*, 50, an Al-Shabab defector, was drawn to Somalia's Salafist armed group both by the promise of a wage and a belief in the Islamic ways of “rights and justice for all”.

Stationed in the Bakool provincial capital of Hudur, Ahmed worked mainly as a sentry, while also corralling residents to answer the call to prayer, collecting road taxes - up to US$300 for freight trucks and between $10 and $20 for cars – and assisting in the collection of zakat, the 2.5 percent tax on annual earnings paid in either cash or kind.

Ahmed’s own pay was modest: $20 or $30 every few months during his three year stint with the armed group, never enough to provide for his four children and wife. “ On a personal level, there was nothing to gain,” Ahmed recalls. “I thought Al-Shabab were real about Islam’s call for justice for all. But it was based on a big lie. The commanders got it all.”

Disillusioned, he made his way to Baidoa, crossing the hills, surviving on the generosity of herders who gave him water and milk. After being screened by Somali intelligence officials, he entered an ex-combatants programme.

Gabeyre Mohamed*, 28, was a member of the elite Amniyat, Al-Shabab’s “secret service”, whose operatives were reportedly implicated in Nairobi’s Westgate mall attack in 2013.

Upgraded from being an Al-Shabab foot soldier to joining a five person Amniyat cell, Mohamed acknowledges it was an honour to be chosen, but despised his role as a killer. “I was given a pistol, a name and a picture of them and sent to kill them. I always lied and came back and said this man is nowhere to be seen.” His conscience told him to leave. “I made up my mind, as I believed I was being sent to kill innocent people.”

"I believed I was being sent to kill innocent people"

At the Baidoa ex-combatant centre he gets no money, but three meals a day, and the hope of a driver’s licence and an education. “I will not return to Al-Shabab,” Mohamed says. “Even the promise of heaven will never make me go back.”

Ahmed and Mohamed are among those who have left Al-Shabab and sought to make a new life. But working out what to do with Al-Shabab defectors is not easy either for the Somali authorities or for the UN Assistance Mission in Somalia (UNSOM).

Waldemar Vrey is director of UNSOM's  Rule of Law and Security Institutions Group (ROLSIG), with part of its brief being to deal with former Al-Shabab ex-combatants.

Vrey describes the work as “delicate”. Applying Disarmament, Demobilisation and Reintegration (DDR) to an organization officially declared a terrorist group has its own difficulties, not least when it comes to gaining donor support.

Under current procedures, defectors from Al-Shabab are vetted by the National Intelligence and Security Agency (NISA) and the AU Mission in Somalia (AMISOM). They are classed as either “high risk” or “low risk”.

Vrey says around 1,000 “low risk” ex-fighters have received some rehabilitation and skills training. Those who want to go home can do so “if it is agreeable to the communities”.

Vrey points out that there is no shortage of replacements for those wanting to quit Al-Shabab. “As 1,000 defect, another 1,000 are recruited. It is not as though recruitment will stand still.” Current estimates of the number of active Al-Shabab fighters vary from 5,000 to 9,000.

It is with the more experienced fighters that the dilemmas become more serious. "The high-end guys, the ones that are hardened, the ones NISA feels cannot go through the rehab process, they have to go through a judicial process,” Vrey points out. “The majority of them are sitting in jail and it is with them we have stumbling blocks.”

The trials have brought new dangers. There was a series of assassinations of civilian judges presiding over court cases for high risk Al-Shabab fighters, who had either defected or been captured. The solution of the authorities was to bring in military tribunals. But the tribunals’ readiness to apply the death penalty drew disapproval from the international community and human rights organizations.

A road-map for ex-combatants

In an attempt to find lasting solutions for fighters who want a new start, in April 2013, the Transitional Federal Government published a road map for a National Programme for the Treatment and handling of Disengaging Combatants and Youth at Risk in Somalia.

The initiative came in the wake of significant military victories by AMISOM and Somali national forces against Al-Shabab in Mogadishu in August 2011, Belet Weyne in Hiraan province in February 2012 and then with the securing of Baidoa and the southern port of Kismayo. 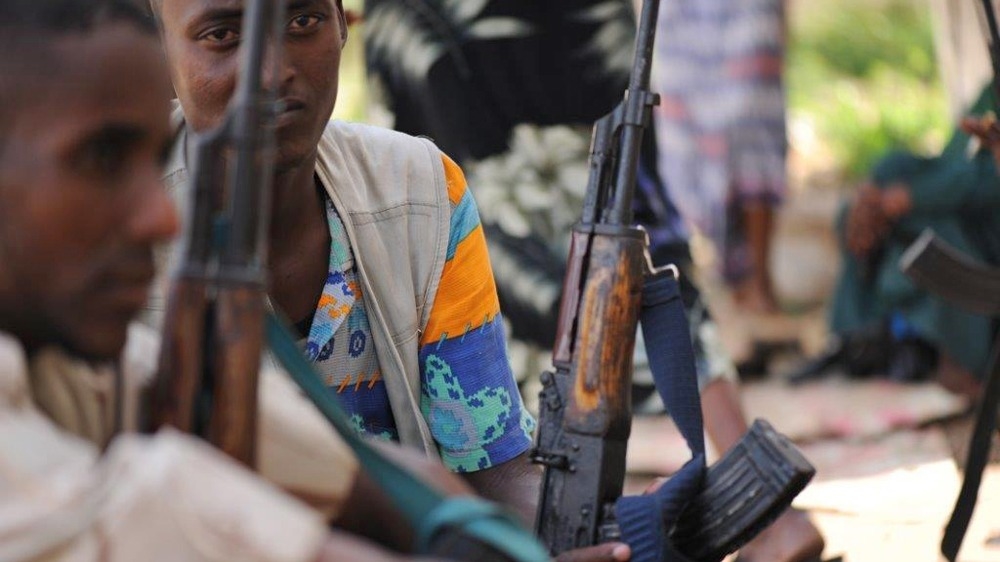 A NISA official in Kismayo, who declined to be identified, told IRIN that former combatants are examined on the basis of their previous history and ideological convictions, which determine the kind of threat they may still pose. The process can be long and laborious. “The longest screening I was involved in took about one month. Some might tell the truth immediately. Others might not say anything, while in other cases stories will change.”

UNSOM’s legal considerations associated with rehabilitation of ex-Al-Shabab fighters, has provided for interventions from outside the mission, with a three man unit, known as the Serendi team – named after Mogadishu’s TF – funded by the Norwegian, Danish and Spanish governments.

Serendi team members include a Special Forces bodyguard and a European-based Somali engineer who fled Somalia during the civil conflict of the 1990s, back on a two-year sabbatical.

Team members did not want to be identified, highlighting the threat from Al-Shabab. “They see us as disassembling their force and we are a target”, one pointed out. The same dangers apply to everyone involved in DDR. A Serendi team member told IRIN that around 70 percent of Al-Shabab disengaged fighters who had been screened had been classed as low risk.

The Serendi team’s methods blend Countering Violent Extremism (CVE) techniques, including individual mentoring and the sharing of experiences between the ex-Al-Shabab, with skills training programmes for livelihoods. DDR experts say building-up self-esteem for ex-fighters is vital.

The militias outside Al-Shabab

Vrey notes that the focus on the war against Al-Shabab has overlooked the activities of other militias. Having profited from two decades of Somalia’s breaking down into a failed state, some groups continue to prosper.

They include clan-based militias, through to the private armies of warlords and business concerns raising their own armed forces to protect their financial interests.

A February 2014 briefing by the Somalia and Eritrea Monitoring Group highlighted dangers of small-arms proliferation following the partial lifting of the country’s arms embargo and the scale of violence used by different militias.

The briefing noted “indiscriminate attacks” by Abgaal and Habar Gedir clan-based armed forces on civilian areas in December 2013, “resulting in the killing and wounding of children, women, and unarmed young men; rape; looting and burning of villages, and extrajudicial executions.”

Vrey said the advantage of other armed groups was they “are not Al-Shabab,” which spares DDR programming the pitfalls of engaging with a terror listed organisation. Furthermore, most militias were already within their communities, making it easier for local authorities to end conflicts through economic revival programmes and other grassroots initiatives.

Ensuring proper facilities for ex-combatants takes time. For example, the location of a TF in Kismayo was recently identified, but security and infrastructural problems slowed things down. To carry out a 30-minute recce of the building, the Serendi team required an escort by Kenyan AMISOM soldiers, NISA, the Somali National Army and close protection security officers. Meanwhile, Al-Shabab defectors in the port city are living in safe houses.

Peaceful solutions within the clans

In Baidoa, where the French funded TF is about to open, the delays have given clans a bigger role in the rehabilitation of about 120 ex-Al Shabab combatants.

A Baidoa elder, Abdul Kadir Hassan, told IRIN that families were taking responsibility for ex-combatants and working out if they could be trusted. “It depends on the individual, but by leaving, most ex-fighters have made up their minds already. So they are seen as safe.” Hassan stressed that DDR was crucial for peace in Somalia.

Elder Adan Abdi, told IRIN about 90 percent of Al-Shabab forces were Somali and “joined because they had no means”. But he stressed that “Al-Shabab is a foreign ideology” and the foreigners would have to be hunted down, not rehabilitated.

Ammunition dumped on a beach in the Somali capital Mogadishu 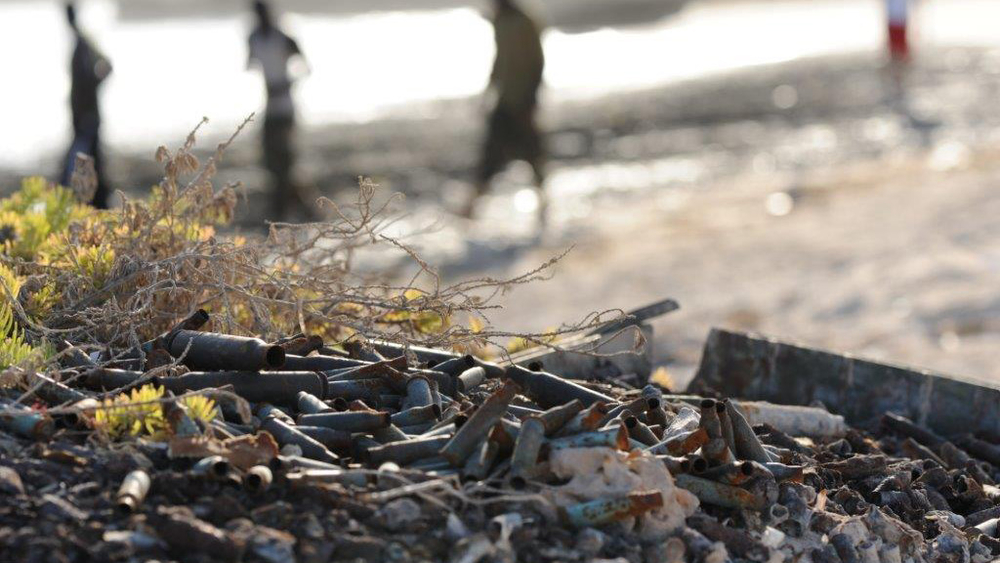 Clan elders have an important role to play in managing clan feuds caused by the conflict. Hassan said a family could request “blood money” as a form of reconciliation, but wide scale poverty made this an unrealistic solution.

"We argue that they were brainwashed, so they were not in their right minds and in this way we can often resolve things through clan justice"

He says it is better to defend the ex-fighters on the basis that they were not free at the time of their actions. “We argue that they were brainwashed, so they were not in their right minds and in this way we can often resolve things through clan justice”.

However, clan elders say the development of the centres is hugely important. For Abdi, there have to be enough centres and they must be able to cater properly for the former fighters. “If someone is hungry and you say come and eat, but there is no food, will they come? The answer is no.

"If you offer them a life they will come. If the centres provide, the ex-combatants will contact their friends in Al-Shabab and tell them it’s not as bad as we thought and they will come as well. And then this thing will end very quickly”,