A warning by authorities in the Democratic Republic of Congo (DRC) that they are considering measures to compel internally displaced persons (IDPs) in the northeastern province of North Kivu to return to their homes, and might close a number of camps in Goma, has alarmed the humanitarian community.

“Recent statements by the Governor of North Kivu regarding the alleged closure of the camps/sites around Goma caused concern among humanitarians as the residents of these sites could be forcibly returned to places of origin or to other locations,” said the European Community Humanitarian aid body (ECHO) in a report published on 13 May. “Such a scenario would put the camps’ residents in a dangerous and insecure situation.”

There are 107,237 IDPs currently living in camps in Goma, according to the UN Office for the Coordination of Humanitarian Affairs (OCHA). Most of these IDPs fled areas held by former M23 rebels when they were defeated in December 2013 by the DRC army, backed by the UN Stabilization Force (MONUSCO).

In April, the governor of North Kivu Province, Julen Paluku, told local media: “The security situation has sharply improved in the territories of Rutshuru and Nyiragongo [two of six territories in North Kivu Province]. We have reinstated local authorities to maintain state authority backed by the police, security services and the army. So there is no reason for IDPs to keep on fearing for their safety once they resettle in their villages.”

He warned those still not wishing to return: “We are planning to impose a deadline on IDPs who are not vulnerable, to leave the camps and return home.” He later claimed that his comments were misconstrued, but has warned of the possibility of closing some camps.

Twenty-five thousand IDPs are yet to return to Rutshuru and Nyiragongo, according to Fellin Lutayichirwa, deputy governor of North Kivu Province.

The government has earmarked US$415,000 for the repatriation of IDPs, and is meeting UN agencies and NGOs before finalizing the launch of the programme, according to Planning Minister Celestin Vunabandi.

“IOM [International Office of Migration] and UNHCR [UN Refugee Agency], jointly with the National Refugee Commission, are currently working on a plan to merge some of the sites with a small number of IDPs,” the two agencies said in a joint statement in French. “This merging will be done in consultation with the IDPs and the procedure will be submitted to the humanitarian community in North Kivu for approval.”

In the last 18 months, 664,251 IDPs have returned to provinces across North Kivu, many with the help of UN agencies and humanitarian workers. UNHCR emphasized the strictly voluntary nature of the returns so far.

“Following the statements by the North Kivu Governor on April 16, UNHCR was informed by the National Refugee Commission (in charge of the administration of IDP sites) and the Ministry of Justice that in no case would IDPs be expelled from the camps,” Christophe Beau, protection adviser for the UN system in Goma, told IRIN by email. “IDPs originating from areas where the government has restored its control in Rutshuru and Nyiragongo would be merely encouraged to go back. As for IDPs originating from areas still exposed to armed conflicts, they will be able to stay in the sites as long as necessary.”

Beau also noted that the National Refugee Commission has identified cultivatable land that can be allocated to IDPs still remaining in the camps and who cannot return to their home areas, particularly because of insecurity.

“The objective is to reduce the dependence of IDPs to humanitarian assistance,” the joint IOM and UNHCR statement said.

These developments coincided with an independent announcement by the World Food Programme (WFP) in April, which has stopped providing food aid to over 152,000 IDPs across North Kivu because of evolving needs in new conflict zones such as the Central African Republic and Syria, according to Djaounsede Pardon, a media and communications officer with WFP in Goma.

“WFP has received less than a third of its budgetary requirements for this year. As a result, WFP is prioritizing assistance to the most vulnerable,” the organization noted in a press statement released on 24 April 2014.

An assessment in February and March 2014 by WFP - carried out in conjunction with UNHCR, IOM, the National Commission for Refugees, and the Provincial Ministry of Agriculture - was conducted in 33 IDP sites in North Kivu. It aimed to establish which IDPs were most vulnerable, according to Pardon.

Indicators such as food consumption and IDP assets were considered during the assessment, he added.

“It doesn’t mean that those who will stop receiving our assistance are self-sufficient, but with the resources we have we cannot assist them. The assistance will be focused on those who are more vulnerable than the rest,” Pardon told IRIN.

“Those no longer considered for food assistance may need other types of assistance, such as equipment for farming, financing for starting small businesses - the list is extensive,” he added. 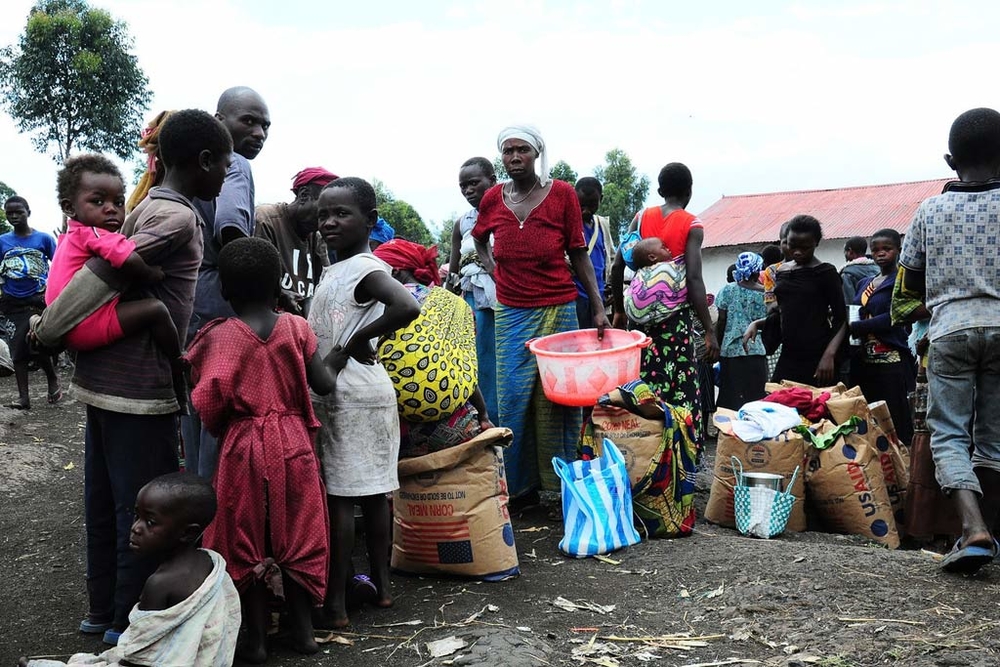 The WFP statement said refugees, particularly those from the Central African Republic who have arrived recently, malnourished children, pregnant and nursing mothers, and IDPs returning to their areas of origin, will be prioritized.

Thousands of IDPs appear to be returning home without waiting for assistance, according to the WFP-led assessment; 109,000 individuals were absent and did not report to their settlement sites during the survey. They are believed to have returned to their villages, the assessment noted.

But many IDPs, mainly from Rutshuru and Nyirangongo, remain in camps waiting for repatriation kits, Emmanuel Kabunga, chief of Mungunga II camp, told IRIN. His role as chief is to act as an intermediary between NGOs and IDPs at the camp.

“I’m working on handing over the responsibility I had in the camp and all my family members are now back home,” he told IRIN. “When I consider that the kit is worth US$50, I cannot waste my time waiting in the camp. I can earn far more than that amount after three months of farming.”

Kabunga said most of the IDPs in his settlement are farmers, and do not necessarily need to wait for repatriation kits (provided by UNHCR, IOM and the National Commission for Refugees) to return to their villages of origin. “When I went to drop my family members to our village, I found that some houses were destroyed and others remain as they were. Even for those who lost their houses, they still have the possibility to rebuild others.”

Still, many IDPs are still fearful of returning to their territories of origin, and unsure of how they will build livelihoods there.

“Life in the camp is bad, we go to bed hungry, and I have been here for two years. I want to go back and I have my land, but I do not have a house, and my fields are not ready to support myself and my children. So, we will wait here,” said Manizabo Mboga, 35, a resident of Rutshuru III IDP camp just outside Goma.

“Even when a zone has been made secure,” UNHCR protection adviser Beau told IRIN in November, “people always fear to return to it because they could still be threatened by people who were in the armed groups.”

Further, squabbles among families and villages over land rights, resources and inheritance are causing tensions among returning IDPs.

WFP resumed food assistance for the most vulnerable IDPs in North Kivu in April for three months.