The needs of male survivors of conflict-related sexual violence living as refugees in Uganda, of whom there are several hundred, are poorly met, with recent legislation against homosexuality making matters worse, according to a new report.

According to one humanitarian official working in the field who preferred anonymity, “many survivors have medical needs due to the assault and have undergone a series of surgeries. However, due to limited medical services available in Uganda, the assault still affects their physical and emotional health. Some of the medical conditions expressed include back pain, leg pain, STI and STD [sexually transmitted infections and diseases] and bleeding.”

“Much more progress is required in interventions addressing the challenges faced by male survivors of sexual violence” especially in the fields of health, stigmatization and security, according to the report, issued earlier this month by Makerere University’s Refugee Law Project (RLP) to mark the second anniversary of Men of Hope, one of several self-help groups it supports.

One barrier to such progress is that sexual violence against men is not widely recognized.

“The problem of refugees in Uganda is not male rape or homosexuality. It’s a minor issue. It’s being promoted and made prominent by the whites and NGOs who want funding,” he said.

“Our basic concern for the refugees is food, shelter, water, health and their safety. Male rape, homosexuality, is not an African issue,” he said.

According to the RLP report, such dismissive attitudes are also common among health workers.

“This is not only peculiar to private medical facilities but also government hospitals. Medical personnel who don’t believe that male rape exists, and who frequently allege that those who report such cases are either crazy or homosexuals, have further victimized some survivors,” it said.

Men of Hope’s president, Alain Kabenga, illustrated this point. “When we go to health facilities to seek treatment, the health workers just laugh and look at us as crazy persons and homosexuals,” he told IRIN.

“Public hospitals say they don’t have the budget for male rape victims.”

According to the RLP report: “This affects access to health services by survivors who fail to see appropriate personnel or are given painkillers just to blot the pain, leaving the condition worse after a period of time.”

“I haven’t read the report. But it’s not true that we discriminate [against] patients who come to our health facilities,” he told IRIN.

“We don’t ask patients who they are and how they got the sickness. Our duty is to protect and prolong life,” he said.

RLP is currently supporting 370 male survivors of sexual violence in support groups in Kampala, as well as western and northern Uganda. Some 320 of these are refugees from the Democratic Republic of Congo. The UN Refugee Agency and Interaid, a Ugandan humanitarian group which campaigns for the rights of disadvantaged people, have an additional 67 male survivors in the gender-based violence (GBV) information database.

According to an RLP working paper, sexual violence against both men and women is a “crime of power” intended to degrade. But in conflict situations, men can be deliberately targeted “in part, to attack males as leaders and protectors [to] diminish their masculinity”.

“Stigma and discrimination is one of the major challenges male survivors continue to grapple with. Much as xenophobia is a common to all refugees and asylum seekers, the situation is worse for male survivors because male rape is a taboo in many cultures,” the report said.

The Anti-Homosexuality Act (AHA), promulgated by President Yoweri Museveni in February, “not only reinforced homophobia but also heightened xenophobia,” it said.

Under the new law, persons found guilty of “homosexual acts” can be jailed for up to 14 years, and life sentences are given in “aggravated” cases, such as those committed by an HIV-positive person, or those involving minors, the disabled and serious offenders.

“Since the president signed the bill, there is total confusion. The community members can’t distinguish between male rape and homosexuality. The confusion is due to lack of knowledge on male rape. People don’t believe male rape exists,” said Kabenga.

“The law has made us afraid. Many of us can’t go to health facilities to access health care due to fear and shame to be labelled homosexuals,” he said.

“Since the enactment of AHA, RLP’s community outreaches on sexual violence against men and boys have been flooded with questions on homosexuality, signalling a knowledge gap on the subject matter,” David Onen Ongwech, acting programme manager of RLP’s Gender and Sexuality Programme, told IRIN.

Men of Hope Refugee Association in Uganda (MOHRAU) is a support group that brings together male refugee survivors of conflict-related sexual violence. 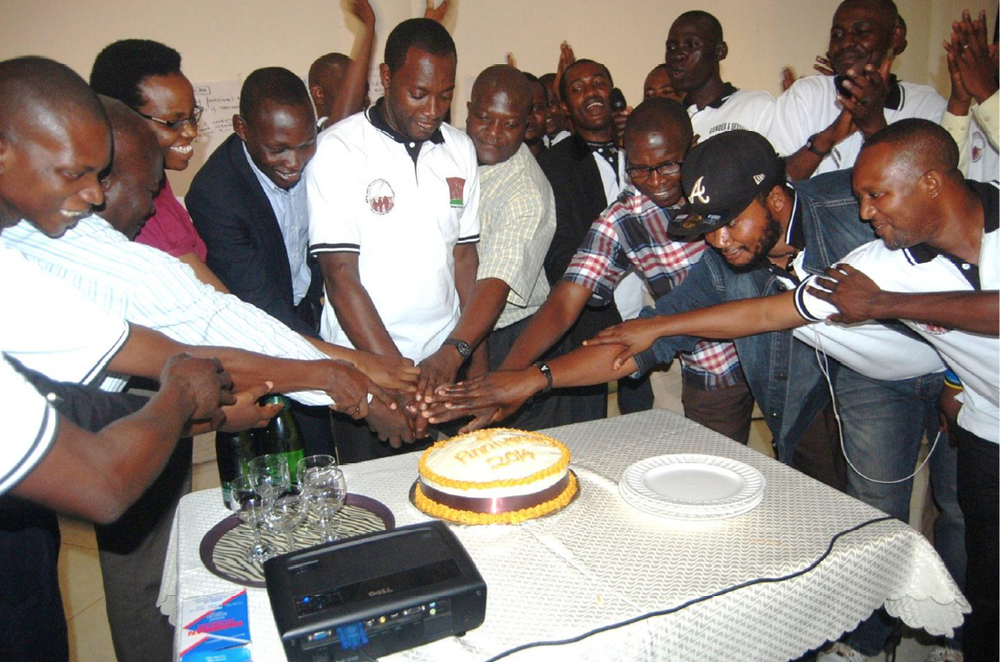 “The whole concept of male rape is new and challenges many people’s understanding on sexual violence in times of war as well as in times of peace,” RLP’s Onen told IRIN. “This ignorance is manifested in the legal gaps in addressing the concept of rape in Uganda’s domestic legislations.”

“It’s this culture of silence that bars male survivors from seeking legal, psychosocial redress, including access to confidential and professional medical services,” he added.

The Uganda Penal Code (UPC) does not recognize male rape as a crime, defining rape simply as “unlawful carnal knowledge of a woman or girl, without her consent, or with her consent, if the consent is obtained by force or by means of threats or intimidation of any kind or by fear of bodily harm, or by means of false representations as to the nature of the act, or, in the case of a married woman by personating her husband”.

Nathan Mwesigye Byamukama, programme officer at the 11-member-state International Conference on the Great Lakes Region (ICGLR), of which Uganda is a member, told IRIN that his organization does not have measures to support male rape survivors.

Many male rape survivors fear returning to their countries to face the perpetrators of the sexual violence as well as the possibility of being ostracized. “Male survivors of sexual violence believe that resettlement is the only option for them,” said the report. But, integration into Uganda is not possible under current legislation, it noted.

“Male survivors of sexual violence demands for holistic and non-discriminative approaches and service provision, that service providers understand the plight of male survivors of sexual violence and accord not only listening ears but also practical supports geared towards prevention and response to reported cases, just like it’s available for women and girls,” Onen told IRIN.

“We need support from the government, doctors, lawyers, police and the community. We appeal to the government to incorporate the plight of male survivors in their planning, programming and budgeting,” he said.