Australia’s military-led operation to prevent boats carrying asylum seekers from reaching its shores has been hailed by Prime Minister Tony Abbott as a success, with over 100 days elapsing since the last boat reached its target. But in Indonesia - the country from which most of the boats previously departed - Australia’s tough new measures have stranded over 10,000 asylum seekers and refugees who can neither proceed to their desired destination nor, in many cases, return home.

“I thought I’d be here two or three months, but it’ll probably be two or three years,” said Musa*, a 17-year-old Afghan asylum seeker who has already spent a year in Indonesia, the past seven months in an immigration detention centre in Makassar, in southwest Sulawesi Island.

For several months after Australia launched Operation Sovereign Borders in September 2013, smugglers continued to organize passage for asylum seekers. However, those whose boats made it into Australian waters were invariably intercepted by the Australian Navy and either towed back into Indonesian waters and handed over to the Indonesian Navy or taken to one of Australia’s offshore detention centres where conditions have been described by human rights organizations as “inhumane”.

Previously Australia and Indonesia cooperated on anti-people smuggling efforts through the Bali Process (a regional 50-member mechanism established in 2002 to combat people-smuggling), but the tow-backs have caused a breakdown in relations between the two countries.

Attempts to reach Australia by boat have now largely been abandoned, both by the smugglers and their clients.

“There’s no opportunity to go by boat; no one’s trying to go now,” said Aalim Allahyar, a 44-year-old refugee from Afghanistan who fled his home and business in Helmand Province after narrowly surviving 15 days of interrogation and beatings by Taliban soldiers that left his brother and sister-in-law dead.

“There’s no choice. We have to wait,” he told IRIN. Allahyar has already been waiting for over two years, 11 months of which were spent in two different detention centres after failed attempts to board smugglers’ boats ended in his arrest. He now lives in accommodation provided by the International Organization for Migration (IOM) in the capital, Jakarta, along with 125 other refugees who are waiting and hoping they will be accepted for resettlement in Australia or elsewhere.

Aalim Allahyar, a refugee from Afghanistan, has been in Indonesia for two years, waiting first for his refugee application to be processed, and now for resettlement 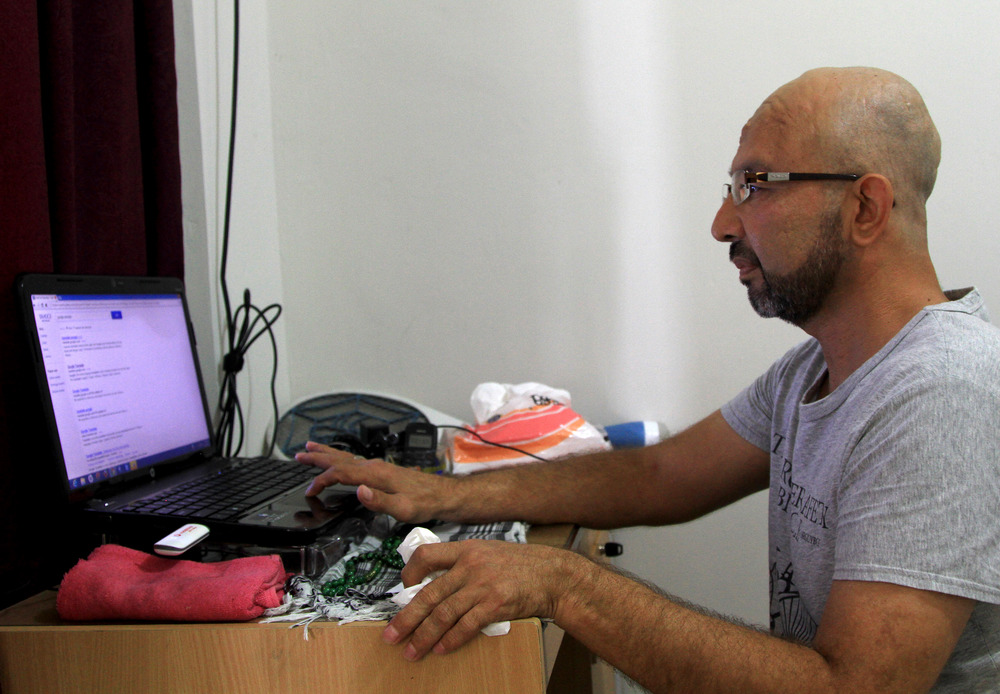 Word that the prospects of reaching Australia by boat from Indonesia are now virtually zero appears to have reached smugglers and would-be asylum seekers in countries of origin such as Afghanistan, Iran, Pakistan and Myanmar. The numbers registering with the UN Refugee Agency (UNHCR) in Indonesia have dropped from about 100 a day during 2013 to about 100 a week now, said UNCHR country representative Manuel Jordao. However, even these lower numbers of new arrivals add to a caseload that stood at 10,567 (7,241 asylum seekers and 3,326 refugees) at the end of February.

Asylum seekers and refugees are barred from working in Indonesia, which is not a signatory to the 1951 Refugee Convention and does not view local integration (one of the three durable solutions for refugees promoted by UNHCR) as an option. Now that sea routes out of the country have been closed off, the only way to move on from Indonesia is through deportation or voluntary return for those who do not qualify for refugee status, and voluntary repatriation or resettlement for those that do.

“When you’re resettled, you really get the lottery,” said Jordao. “Resettlement benefits less than 1,000 a year and I have more than 3,000 recognized refugees.”

Asylum seekers endure long anxious waits before they find out whether they have hit the resettlement jackpot and much of the waiting happens behind bars. There are currently close to 2,000 migrants and asylum seekers (including 364 children) in 13 immigration detention centres (IDCs) around the country.

“Detention is a big problem here; there’s an abusive use of that policy,” Jordao told IRIN. “The IDCs are not the best in the world - they’re understaffed, overcrowded, staff lack training and regimes vary enormously from one IDC to another… Length of detention also can be very long.”

Hasan Kadad, a refugee from Syria, arrived in Indonesia with 12 of his family members, nearly two years ago. With very little information about the asylum system, he assumed they would have a short stay in Indonesia before proceeding to Australia to join his two sisters. But money to sustain his family soon ran out and other refugees advised him to register with immigration authorities in Jakarta. He did so and was promptly detained, along with his family who included three children under five, his elderly parents and pregnant sister. They spent a total of seven months in detention before his sister gave birth and they were transferred to IOM housing in Jakarta.

“My parents were sick; all my family had stress and the women were always crying,” Kadad recalled. “My daughter learned to walk in jail and my son can’t forget this time. He’s worried they’ll send us to another jail.”

Hasan Kadad (pictured second from left) and his extended family arrived in Indonesia from Syria 21 months ago expecting a brief stay before joining family in Australia. After seven months in detention, they are now awaiting resettlement 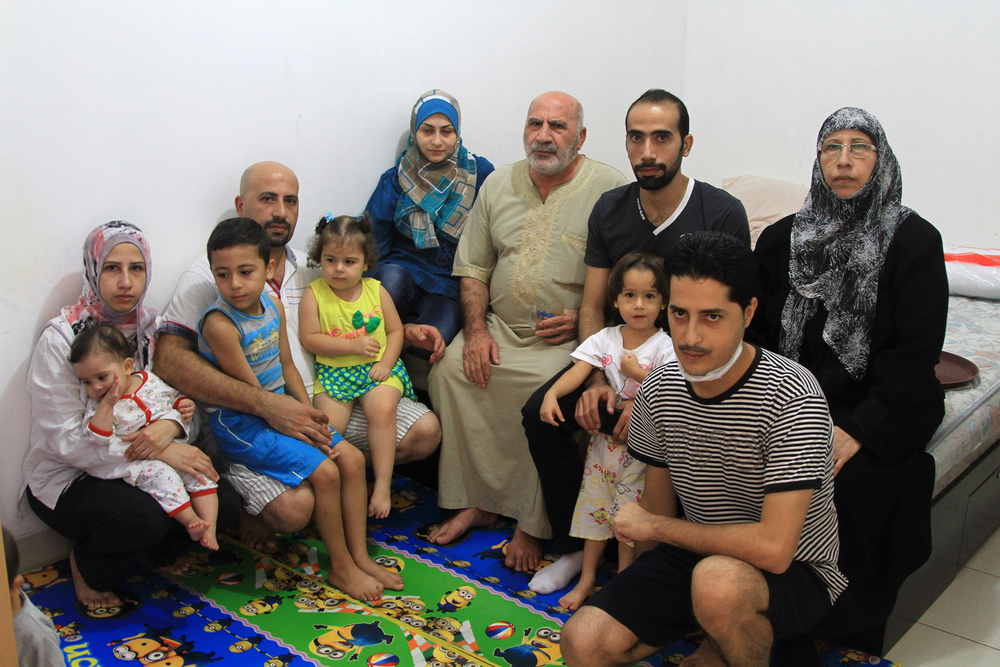 Until recently, new arrivals with some remaining resources headed straight for places like Cisarua, a popular tourist area about 70km south of Jakarta, where they could live more cheaply than in the capital, exchange information with one another and connect with smugglers organizing boats to Australia. They could avoid detention providing their boats were not intercepted by the authorities.

Now that boats are no longer departing, asylum seekers are exhausting their savings after a few weeks or months and increasingly making the decision to surrender themselves to Indonesia’s immigration authorities knowing that they will be detained for at least six months, but that they will receive food and shelter while they await the outcome of asylum applications.

After nine months in Indonesia, Yahya Abaker Abdallah, from Sudan’s Darfur region, has almost reached this point. Abdallah had already spent 10 years as a refugee in a camp in Darfur before he sold all of his family’s livestock to pay a smuggler to bring him to Indonesia. Now he and three other Sudanese men are renting a room in Cisarua for 800,000 rupiah (US$70) a month, but “there’s no money left, and no help,” Abdallah told IRIN.

Most asylum seekers are detained until their refugee status determination has been completed, a process that takes 12-16 months, according to Jordao who acknowledged that in areas where UNHCR has few or no staff, the wait may be longer. Families, women and children are not exempt and often spend months in detention before space becomes available in shelters and housing for the most vulnerable managed mainly by IOM.

“If I go back, my father will kill me”

Sheida, 30, paid a smuggler $5,000 to get her out of her home country of Iran after her family refused to accept her conversion to Christianity. Following an abortive attempt to take a boat to Australia, she spent eight and half months in an IDC in Bali where she was the only single woman. After being transferred to an IOM shelter for single women in Makassar a year ago, she was finally interviewed by UNHCR but has yet to receive a refugee status decision. “I’m very stressed whether UNHCR will accept me or not,” she told IRIN from her small windowless room at the shelter. “If I go back, my father will kill me. He tried before.”

While UNHCR’s staffing capacity is stretched in Indonesia, especially outside Jakarta, IOM receives significant funding from the Australian government to support a staff of over 300, about half of which work on refugee-related projects. Coordinating with Indonesia’s Immigration Directorate, IOM supplies the IDCs with all of the detainees’ basic needs as well as paying for overflow accommodation and housing for vulnerable asylum seekers and refugees awaiting resettlement. The approximately 4,000 asylum seekers and refugees under its care each receive a monthly stipend of 1,250,000 rupiah ($110), just enough to cover their food and basic health care needs.

For Kadad and his family, the IOM accommodation “was like paradise” compared to detention, but nine months after being granted refugee status and with no news on resettlement, they are becoming increasingly desperate for an end to their long period of limbo. “We eat and sleep. I don’t have money to move around,” Kadad told IRIN. “I’m not free.”