Read about what we achieved.
MARADI/DIFFA

Farmers in drought-ridden parts of Niger are facing a dangerous combination of stresses - chronic drought, land degradation, pests and poor seeds - which threaten to throw them even deeper into hunger and poverty.

James Litzinger, an agricultural specialist studying how farmers use pesticides and fertilizers in Niger's central Maradi Region, said there is an exponential yield loss when people face these compounded problems: "One [loss] plus one [loss] equals three," he told IRIN.

In 2009, in the journal Comptes Rendus Geoscience, scientists Gil Mahe and Jean-Emmanuel Paturel warned that, since 1970, West Africa has experienced one of the most abrupt changes in climate since weather records began. Environmental stresses hitting Niger include soil erosion, desertification, degradation of grazing lands, decreasing availability of water, and loss of vegetation cover and biodiversity, says the UN Development Programme (UNDP).

Farmers in Malfaroua Village in Maradi Region say the rains in 2013 came late and ended early, ruining their harvests. Many of the village's 400 families have already run out of stocks, said village chief Moussa Ibrahim. Seventy-five percent of the village's families rely on remittances from relatives who have migrated - often to Libya, Nigeria, or Agadez in northern Niger - to survive.

The soil is degraded, the fertilizer they use has little effect, and seed quality is poor, said Sountalma Ousseini, project coordinator with NGO Catholic Relief Services (CRS) in Niger.

"These farmers are in a vicious cycle, and they need to break it," said Litzinger.

This year, up to three million Nigeriens will face food insecurity, estimates the UN Office for the Coordination of Humanitarian Affairs (OCHA). 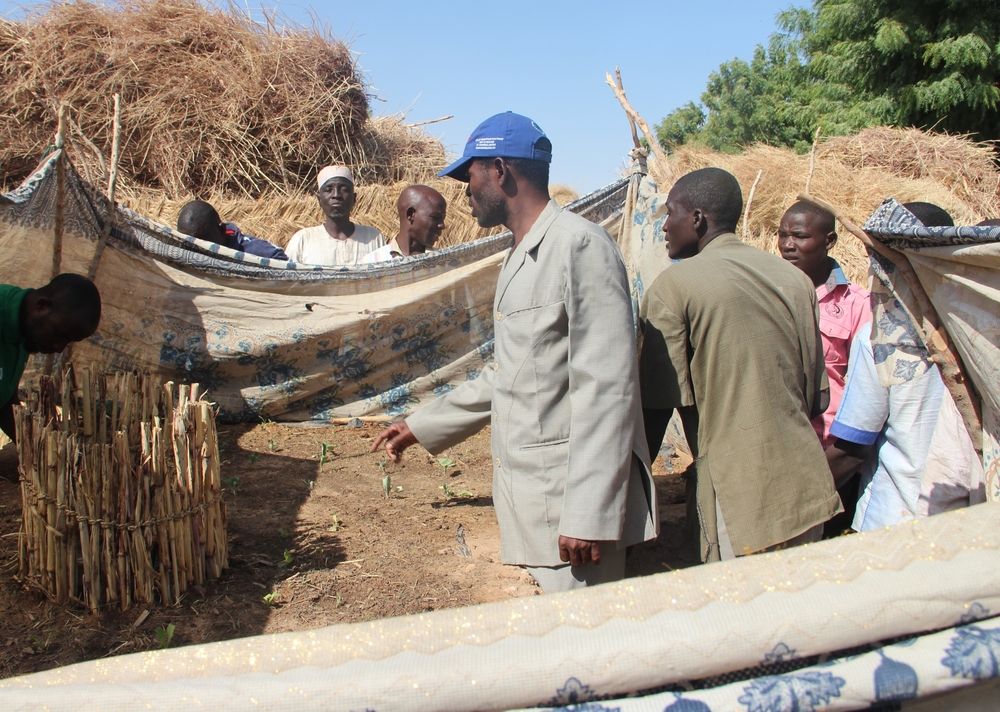 Multiple efforts are underway to help farmers rehabilitate depleted soil and to maximize the income earned from what little they produce.

In Malfoura, CRS has helped farmers set up better storage facilities for their grains. The farmers also received plastic bags to keep out vermin and prevent rotting. As a result, they can sell their millet at 22,000 CFA per 50kg (US$44) during the lean season, instead of having to sell it at 16,000 CFA ($32) immediately post-harvest.

These efforts, which are taking place across the region, are having an impact. But chronic drought - Niger experienced three terrible droughts between 2005 and 2013 - as well as demographic pressures mean the work is unlikely to shield villagers from persistent vulnerability and hunger stress.

"It's as much a problem of demography," said Chief Ibrahim, explaining that bigger families have to eke out a harvest from increasingly depleted soils on the same-sized plots. "The space we have is over-exploited, so we produce less."

In the village of Guidan Sani, in Maradi Region, Sekina Oumarou - a mother of six - said she often spends up to six hours a day waiting to collect water at the village's only well. They rely on a bullock to pull up each bucket, as there is no pump and the water table is 40m deep.

The water level has dropped year on year, said villagers, forcing them to abandon irrigation and market gardening, and stripping them of valuable extra income to buy food.

Guidan Sani is surrounded by sand dunes, but it was not always like this. "It used to rain here. We could grow enough to get by," said Oumarou.

CRS has introduced to the village a drought-friendly market garden technique imported from Madagascar. The concept is simple: a wooden structure, lined with plastic and filled with layers of sand, ash and manure, traps all water poured into it, creating a moist micro-climate that also filters out impurities. With it, dirty household water - even urine - can be used to water the plants.

With the technique, families should be able to harvest three times a year, said Ousseini.

Thus far, two such structures have been built in Guidan Sani. The carrot, cabbage and lettuce plants were still at their nascent stages when the village was visited in early February, but residents were hopeful that the structures would work.

In the nearby village of Doukou Doukou, families harvested "next to nothing" last year, said Rahat Amadou, the head of a women's cooperative. Here too, the land is dry, sandy and unproductive.

Here, as in much of the country, the soil is lateritic, and thus very acidic, so fertilizers are needed to neutralize the soil, said Litzinger, the agriculture expert. Most cooperative members he spoke to said they used manure to fertilize their Moringa trees, but the dung is too strong, he said. It needs to be combined with dry branches - and, ideally, with phosphorous - to create a more effective compost.

A bullock in the village of Guidan Sani, helps villagers collect water from the 40m deep well. 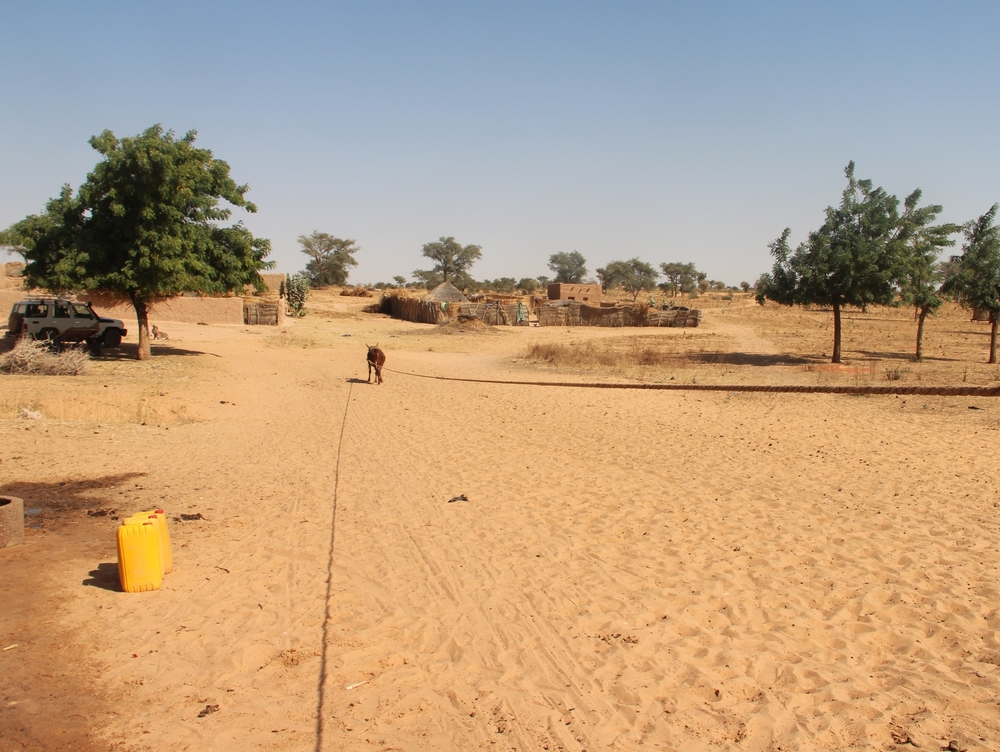 More testing needs to take place to figure out the best fertilizers to replenish the soil, he said, warning that an agricultural solution for one drought-prone region will not necessarily suit another.

"Everything they're doing is futile," he said. "To get it right, you need a good seed source, decent fertilizers so the plants can tolerate pests and some kind of water conservation system. None of these problems is insurmountable, but it requires planning and investment."

But Doukou Doukou's residents do not have much margin for failure. "Most families here don't even have one month of stocks left," village chief Issofou Kader told IRIN. "It's very, very hard to grow anything in this soil."

Further east in Zinder and Diffa, fertile basins known as "cuvettes" have for centuries helped villagers grow grains and vegetables, but thousands of them have been silted over as the desert spread.

Between 1986 and 2005, Zinder's Gouré Department and Diffa's Maine-Soroa lost 34,000 hectares of cuvettes to silting, and since then the degradation has sharply accelerated, according to studies cited by UNDP, whose Niger head, Fodé Ndiaye, called the situation "truly alarming."

Rivers, including the Niger River and the Goulbi de Maradi River, as well as large ponds and valleys, are also experiencing silting, and in some cases dams that have been built to help irrigate crops have increased silting levels in nearby departments, said Ndiaye.

Virtually every municipality in the department of Gouré has been affected by severe soil degradation, said UNDP.

UNDP is supporting the government's fight against silting, a project known by its French acronym PLECO. UNDP has helped villagers reclaim 7,000 acres of cultivable land by reinforcing the sand dunes surrounding the lowland basins with woven millet stalks and other local materials, and by planting grasses and shrubs on them to slow soil erosion. Farmers are also being trained in sustainable farming techniques and careful water management.

But these are just pilot projects, and a huge scale-up is needed to reclaim the 300,000 hectares of silted-over land.

Scaling up such projects countrywide would require not only a huge funding boost, but also better training and organization among farming cooperatives to enable them to test new irrigation, water conservation and fertilizer techniques, said Litzinger.

"Farmers need to organize and take part in some testing. It would take some training, but it would not be that hard," he said.

This would entail stronger links with scientific research institutes and the government, and a more proactive state approach to training farmers. "There is no substitute for [the] host government to go out and educate their population [on] how to overcome these problems," said Litzinger.

When farmers and market gardeners do organize, even on a very small scale, it has a huge impact, said CRS.

In villages across Maradi, 30-women-strong associations have formed with CRS's support. They collectively save money to rent donkey carts to get their produce to market, buy fertilizers, buy and sell animals, and, in some cases, process foods such as peanut oil.

Women also use the money for healthcare and household necessities, but mainly they use it to buy food, Uma Abdu, a cooperative member in Maradi's Guilglije Village, told IRIN.

OCHA says Niger needs $390 million to fund emergency response, vulnerability and risk reduction, and efforts to boost resilience in 2014. Thus far, $419,589 of this call has been received.

Government and home-grown initiatives are also underway to help boost sustainable agriculture, including the programme Nigeriens Nourish Nigeriens, but most are severely underfunded.