Read about what we achieved.
NAIROBI/MOGADISHU

Sexual and gender-based violence is a major issue in Somalia, especially for internally displaced persons (IDPs) living in south and central Somalia. A Mogadishu-based NGO working to protect women and children, Save Somali Women and Children (SSWC), has recorded more than 2,000 survivors of sexual violence in Mogadishu since it was set up in July 2012.

People in IDP camps are most vulnerable because they do not have proper shelter or security, according to Fatima Ibrahim of SSWC. “Perpetrators can easily get access to IDP camps, and rape even in the presence of husbands and children,” she told IRIN.

Many sexual violence cases occur in the city districts of Hodan and Deyniile, the organization says.

Deyniile had been a proposed site to relocate IDPs living in Mogadishu, but the plan was put on hold in July 2013, due to the government’s weak control of the area and security concerns.

“Very high numbers of incidents of sexual violence have been reported consistently particularly in IDP camps and settlements in Mogadishu and surrounding areas,” said the Somali Federal Government, in a joint communiqué with the UN in May 2013. “There exists a deep culture of silence and fear regarding crimes of sexual violence, which significantly impacts on reporting and response.”

There were 800 cases of sexual and gender-based violence in Mogadishu in the first half of 2013, according to The UN Office for the Coordination of Humanitarian Affairs (OCHA).

“Something very concrete and not impossible to do would be for the government to start ensuring that at least the basic and the big IDP camps in Mogadishu have a basic police presence,” said Laetitia Bader, an Africa researcher with Human Rights Watch (HRW).

An HRW report released on 13 February called on the government to take strong action to better protect women and children in those parts of the country over which it has control.

“It was clear from our research that rape is an everyday fact of life for many women and girls in Mogadishu,” said Samer Muscati, women’s rights researcher at HRW and a co-author of the report, speaking at the launch of the study in Nairobi.

“Impunity is the norm”

Access to justice is also a major impediment. “Accountability for sexual violence in Somalia is almost non-existent; impunity is the norm,” said Muscati. “After years of armed conflict the formal justice system is weak; women are reluctant to file complaints because of social taboos [and] women have a legitimate fear of reprisals.”

In January 2013, a woman who alleged she had been raped, and the journalist who interviewed her, were both arrested and sentenced. In November, two other journalists, one the victim of alleged rape, were arrested and charged with defamation.

“In the south we are concerned about the fact that women alleging rape and journalists who have reported on this, have been jailed,” Ed Pomfret, Somalia campaigns and policy manager for Oxfam, told IRIN. “Women need to have access to sympathetic courts and police to ensure that perpetrators of sexual and gender-based violence are tried fairly and brought to justice.”

Women officers of the Somali national police are shown during a ceremony to inaugurate their training programme, conducted by the African Union Mission in Somalia (AMISOM)’s Police Training and Development Unit with funding from the Italian Government. 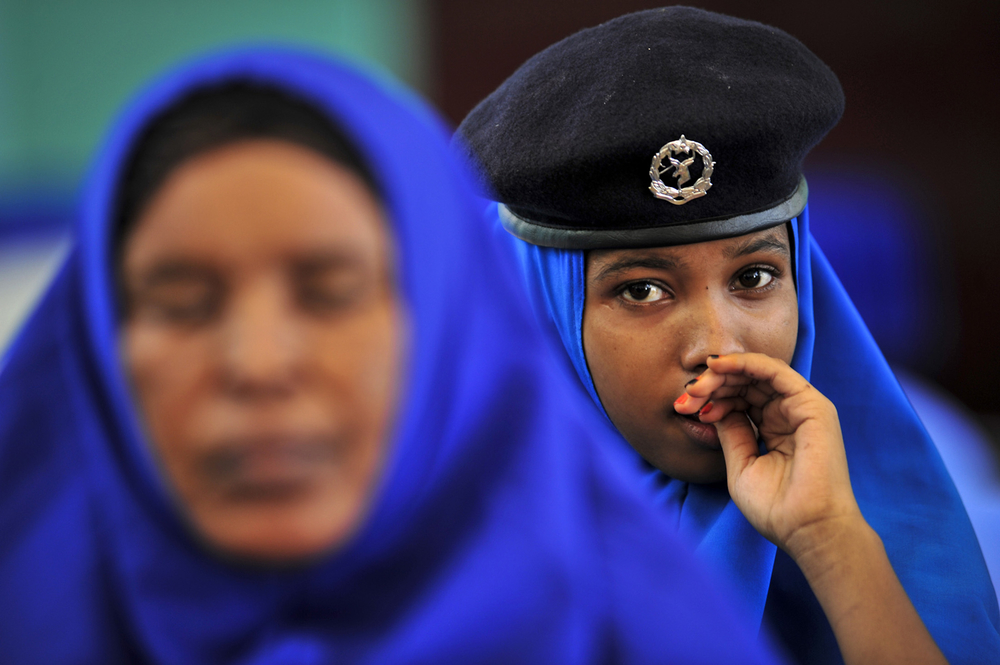 “The Penal Code criminalizes rape, but considers it a crime against morals rather than against the person. As a result many women do not trust the system,” noted a March UN report on sexual violence in conflict.

The government is in the process of writing into law a National Gender Policy. But Muscati argues that this initial draft “did not address violence in a meaningful way”.

Still, he believes the document could have a big impact. “The policy could set a historic precedent if it includes violence against women as a key priority,” but, he cautioned, “the sense I have is that this is not a priority of the government.”

The problem is not confined to the south.

“In the north there is a limited system of monitoring and reporting supported by the Human Rights Commission, which needs more support and development,” Pomfret told IRIN.

“The Somaliland acting attorney-general announced recently that traditional forms of justice should not supersede the civil and criminal court system. But we are still waiting to see if this actually has an effect… There are different systems in different parts of Somalia but across the board access to justice is still too limited.”

The withdrawal of Médecins Sans Frontières (MSF) from Somalia in 2013 due to security concerns has not made things any easier. “Survivors and local service providers identified the MSF facilities as the best known of the few completely free clinics where local organizations could refer victims of sexual violence,” the HRW report noted, adding that this had left a big gap in service delivery.