Read about what we achieved.
BEIRA

At dawn each day, weather permitting, scores of small craft - up to 10 metres long and crewed by eight - launch from Beira’s Praia Nova (New Beach) to set out and haul in 400-metre gill-nets in a constant cycle of roughly 15 minutes, for the next nine or so hours. Even though a single boat sets and hauls nets with a reduced and illegal size mesh over a distance of around 12km daily, the catch barely pays for the fuel used by the single 15-horsepower outboard motor.

In July 2013, across the bay from Beira, near the Pungwe river mouth, fishing crews began catching prawns not seen before, known locally as “Rainbow” prawns or “the new species”.

Praia Nova’s Community Fisheries Council president, Dilip Ramgi, told IRIN: “The capture is high [of Rainbow prawns], but the value is not good. People think they are diseased because they are not used to them. The normal prawns are much more delicious than the Rainbow… [and] the exoskeleton [of the foreign prawn] is much harder.”

The sales price for Rainbow prawns is only 50 metical ($1.67) per kilogram and a commercial enterprise has been buying them, while local prawns continue to sell at 150 metical ($5) a kilogram. “More are caught of the new species than the local one. They are from Southeast Asia. They are taking over the [prawn] beds,” Ramgi said. “No one knows how they got here.”

"More are caught of the new species than the local one. They are from Southeast Asia. They are taking over the [prawn] beds"

There is speculation the Rainbow prawns arrived in the bilges of foreign trawler vessels, or were transported from Asia to local prawn farms and escaped through careless management. The government fisheries department is still determining precisely what type of prawn they are, and trying to establish how they arrived in Mozambican waters.

At Praia Nova’s market, where fishing boats return in the late afternoon to sell their catch to traders, the disparity between the availability of local and Rainbow prawns is stark. Trader Maria Albert, 19, who has four children, displays four local prawns next to small mound of Rainbow prawns and a dozen or so small fish. She makes $3 to $6 a day profit. “There are not much local prawns, they are rare now. Poor people buy the rainbows, but not often,” she told IRIN.

The alien species has expanded its habitat by about 10km from the Pungwe river mouth and analysts say it would be all but impossible to eradicate. The invasion is putting additional pressure on local prawn stocks, which have been suffering the adverse effects of the of the country’s dam system.

Mozambique’s prawns are “internationally renowned and play a major part in the national revenues,” said a report called Damned By Dams, by International Rivers, an NGO advocating the protection and preservation of riverine systems.

“The regulated flow [by the Cahora Bassa dam] on the Zambezi River in conjunction with the loss of nutrient-rich sediment has had a devastating effect on prawn populations and catches. An estimated $10 to $30 million a year is being lost due to decreased catch rates,” the report noted.

Prawns lay eggs in the sea, and the hatched larvae are forced into river mouths and mangrove forests during the dry season by ocean currents when river flows are weak. They are then pushed back into the sea as juveniles during the rainy season, when river water flows are stronger.

More than a quarter of million Mozambicans rely on fishing - both freshwater and maritime - for their livelihoods, and their activities support downstream enterprises from traders to transport businesses, as well as contributing to food security.

A report by the South African Institute of International Affairs in August 2013, Small-Scale Fisheries in a Modernising Economy: Mozambique, noted: “The pressures on Africa’s fish stocks [which create employment for 95 percent of fishers and account for more than 90 percent of the fish consumed in Africa] are likely to grow in coming years, driven both by domestic and international demand. About 75 percent of Africa’s fish stocks are either over- or fully exploited.”

Mozambique’s nearly 2,700km Indian Ocean coast is home to about 60 percent of the country’s 24 million people, with about 75 percent engaging in subsistence agriculture. The skewed settlement is attributed to nearly two decades of civil war, when people fled the hinterland for the coastal regions, where agricultural land is generally less suitable for food production.

“Every year the size of fish is getting smaller… It’s the reason why the net size is being reduced,” Ramgi said. The minimum mesh size of beach seine nets (used from the shore) was 38mm, which was too big, so 25mm mesh has been adopted, even though it is “not legal”. Likewise, gill net mesh sizes have been reduced from 50mm to 38mm.

Fish on drying racks in the fishing village of Ndsalane, about 30km north of the Mozambique port city of Beira 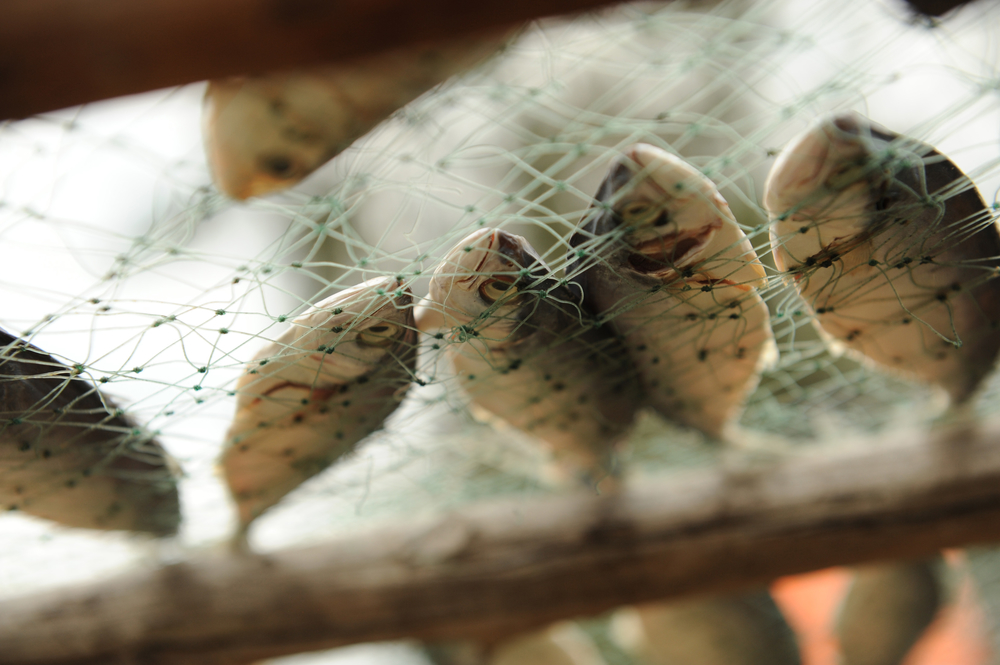 There are more than 1,200 fishermen operating from Praia Nova - the country’s largest launching site - with 292 registered gill nets, a sharp decrease from the 370 nets in 2012, and the 414 nets in 2007. “People are not necessarily giving up fishing, some are just moving northwards. But there is no money in fishing anymore. In the past I had ten fishing boats, now I have only three,” Ramgi said.

Fishermen told IRIN that three years ago an eight man crew could expect to return from a day’s gill-netting of pelagic fish with between 90kg and 150kg - now, a 90kg haul is seen as a good catch.

The reasons are disputed among fishermen, with blame attributed to the increasing number of people driven to the sector as a last resort, the destruction of coastal mangrove forests for use in construction and as fuel, the use of illegal chicocota nets – made from mosquito nets – and because their equipment restricts them to just under five kilometres from the shore.

Illegal chicocota nets are made in plain sight on Beira’s beaches, with mosquito nets sewn onto a frame of old trawler net ropes to form a large funnel. The fine mosquito net mesh means that nothing – not even larvae – escape. About 80 percent of the catch is usually dumped as unsuitable for consumption.

Antonio Remedio Augusto, of the government’s small-scale fisheries department in Sofala province, told IRIN there were “maybe more than a 1,000 chicocota nets” in use around Beira, and despite awareness campaigns the practice was very difficult to stop. “They tell us, ‘Okay, give us money to buy a good net’. People know the damage [these nets cause to the marine environment], but [fishing with] chicocota nets provides good money.”

About 600 community fisheries councils form a central plank in a community-government partnership in small-scale fishery operations and are used as a conduit for everything from government communications and assistance to conservation awareness and providing financing.

In 2010 the government gave the Beira council a boat by to patrol the coastal waters and rip out chicocota nets. But little has been achieved because “there is no money for fuel”, Ramgi said. 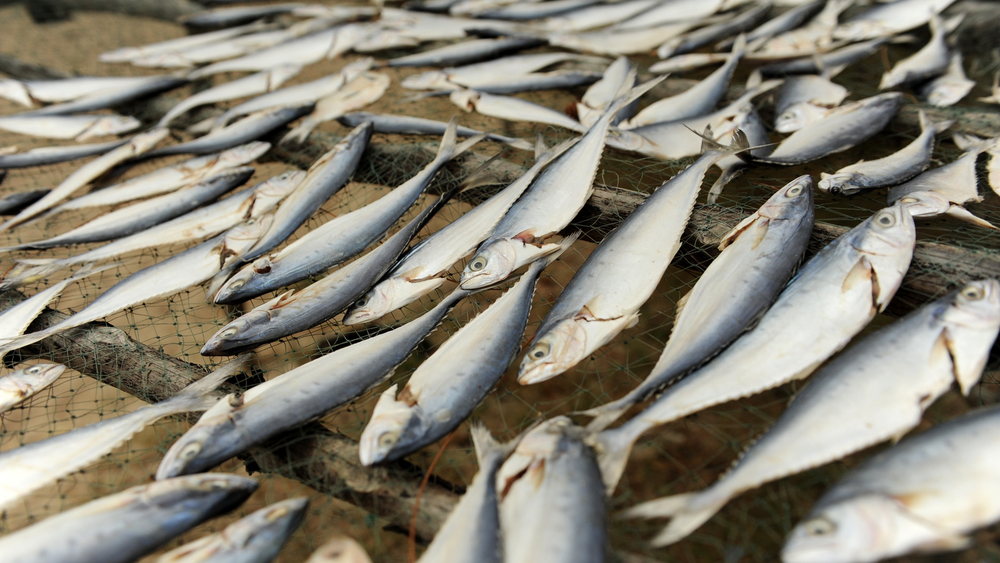 Praia Nova’s council office uses mangrove poles as supports for its building and the illegally harvested wood is sold openly in the adjacent sprawling market, where the hundreds of stalls are constructed from mangrove timber.

About 40km north of Beira, the 1,400 fishermen in the village of Ndjalane have experienced first-hand the impact of denuded mangrove swamps on their livelihoods. “When the mangroves were cut down, everything disappeared - the fish, crabs, prawns, everything,” Ndjalane’s community fisheries council president, Antonio Maximo, told IRIN.

A three-year-old joint donor-government replanting programme has seen the mangrove forests begin to recover, and the local council has strict controls on harvesting the trees. Anyone from the community needing wood “has to ask the council first”, Maximo said. “People can only remove plants where the density is high. If people are caught removing plants… the wood is confiscated and they… [have] to plant 500 new plants.”

However, the rejuvenated areas remain vulnerable to outsiders plundering the wood for sale in Beira.

Some fishermen believe changing climate conditions also account for reduced catches. “The rains are coming later. Normally they came during the November/December months, now it’s January/February. Bad weather [which prevents them from fishing] is more frequent, and the tides [are] much higher than in the past,” fisherman Chiringa Boaze Munchacha, 32, told IRIN.

Jaime Tangune, president of a Beira-based transport association, told IRIN that fish were being dried for only one day to retain water - making it heavier so as to fetch higher prices - instead of two days as before, reducing the shelf-life of the fish from more than a year to just a few months.

The 2008 global economic slowdown did not dampen the country’s growth rates – in part driven by a resource boom – but it has not translated into employment as there has not been “any significant structural change, limiting its capacity to sustainably reduce poverty and foster human development, still one of the lowest in the world,” a 2012 report by African Economic Outlook said.

The sustainability of the small-scale fishing sector lies on the land, Augusto noted. “If people have jobs, they will stop fishing.”