Farmers in the Central African Republic (CAR), which has been immersed in violence since a coup in March 2013, urgently need more seeds and tools to avert a nationwide food crisis, aid agencies have warned.

As many as “94 percent of communities report that they do not have enough seeds to plant for the next agricultural season” in March, according to the findings of a Multisectorial Initial Rapid Assessment (MIRA) of humanitarian needs in CAR, which was undertaken by several UN agencies.

“A high proportion of farmers were unable to sow their fields for the last season or sowed only a reduced area so this year food stocks will run low sooner,” Dominique Burgeon, emergencies director of the Food and Agriculture Organization (FAO), told a news conference in Bangui this week.

“People told us their fields had been burned, they have lost their tools, their goats and poultry, and many women’s groups have lost their milling equipment. All this has had a serious impact on food security; we estimate that currently 1.2 million people in the country are food insecure, and 40 percent of those severely food insecure.”

He added: “Normally in this country the hunger gap starts in July but this year we expect it to start in February.”

Burgeon said considerable amounts of food aid are needed urgently to cover the hunger gap, and beyond that, it is essential to give people the means to restart production.

FAO, he said, has decided to treat the CAR as a priority for the whole organization and to lobby not only for a short-term response but also for a longer-term revival of the country’s agricultural sector.

The severity of the agricultural crisis was underlined at the same news conference by John Ging, operations director for the UN’s Office for the Coordination of Humanitarian Affairs (OCHA).

“The most urgent needs are… assistance with seeds and tools for helping people to recover their livelihoods. We in the international community have to mobilize very strongly in support of agriculture in this country. We’ve got to focus on helping people to help themselves,” he said.

OCHA estimates that 886,000 people are displaced in CAR, including 500,000 in Bangui. The hundreds of thousands displaced in the countryside need to go home for the planting season, said Ging.

He emphasized that 2.6 million - half the population - now need humanitarian assistance, owing to acute poverty as well as widespread displacement.

Seeds and food stocks are in short supply: most people surveyed said their meal consumption has dropped from three times to once a day

According to the rapid assessment, farmers in many areas planted a smaller acreage than usual last year owing to insecurity, which forced them to plant in areas further from their villages, where less land had been cleared.

This disruption in farming activity, as well as destruction and pillaging, has meant that seeds and food stocks are in short supply: most people surveyed said their meal consumption has dropped from three times a day to once a day.

Encouragingly, the report says “78 percent of respondents state that farmers will be cultivating in upcoming weeks… according to direct observation even displaced farmers will have easier access to land, and more time to open fields than last year. Thus provision of agricultural inputs and support, such as seeds, is crucial to restore their productive capacities.”

Ging said that everywhere he had gone in the CAR, women had said that education was also a priority. Sixty-two percent of the schools in Bangui, he said, had been occupied.

He applauded the fact that 76 international aid organizations are present in CAR, but noted that more are needed.

“If you go to any of the countries where we have very large humanitarian operations, you will see all of the big NGOs present. Many of those large international organizations are not present in this country, and we need them to come here urgently. We need their expertise and their experience.”

Much more funding is also needed, he said.

“We have a humanitarian plan which is [costed] at US$247 million, and so far we have only received $30 million in support of that.”

The $247 million figure dates from last year, he added, and the needs will increase significantly.

In his opening remarks, Ging also underlined “the dangerous and difficult circumstances” facing aid workers in CAR, and paid tribute to the six staff of international aid organizations who had been killed in the course of their work in the country over the past year.

An aid worker was reportedly killed in Bangui this week, while another recently disappeared.

In recent months, following an outbreak of inter-communal fighting in Bossangoa in September, Bangui has seen the worst violence. The fighting peaked in early December, when at least 750 people were killed in the capital.

Since a spike in violence in Bangui following the 10 January resignation of president Michel Djotodia, unrest has subsided in the capital, with troops from the French military mission Sangaris and the African Union mission MISCA stepping up patrols. The nights have been quieter than since early December. 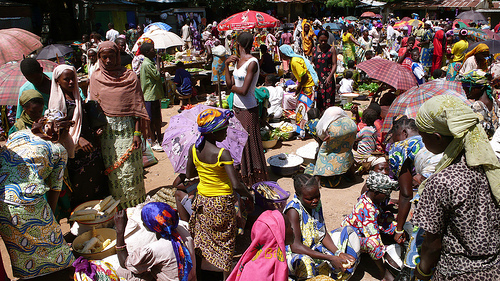 Also this week, hundreds of soldiers from the former president Bozize’s forces, the FACA, assembled at an army registration centre. After Bozize was ousted last March, the FACA went into hiding, returning to civilian life or joining the anti-balaka militia (opponents of Djotodia’s ex-rebel and mainly Muslim Seleka forces, which were officially, but not effectively, disbanded in September.)

Nearly all of the FACA soldiers at the assembly point were in civilian clothes. One of them told IRIN: “We didn’t dare report for duty while Djotodia was in power because the Seleka would kill us.”

Still, in Bangui about half the population still prefers to sleep away from their homes at night, either at the massively overcrowded airport camp, which hosts nearly 100,000 people, or around churches, while the Muslim minority has concentrated in a few districts.

The rapid evaluation assessment found that insecurity is perceived as less critical in most rural areas although it is still a major concern. Near the northern town of Bossangoa, a highly insecure zone where violence between the ex-Seleka and the anti-Balaka first erupted in September but where Sangaris is now patrolling outside the town, villagers are now returning to their homes, according to an aid worker who asked for his name to be withheld.

“They had been living in the bush since September,” he said. “You could see the exhaustion and suffering in their faces and on their bodies.”