Read about what we achieved.
BANGUI

Almost 20,000 people of Chadian origin have left violence in the Central African Republic (CAR) in recent weeks, and many more are expected to join the exodus, which is straining humanitarian capacity in Chad, a country many of those fleeing have never lived in.

“Those of us who were born here are Central Africans, but we are treated like foreigners. We have never seen Chad but have to go there for our own protection,” said Awa Rabilou, one of thousands of people camped for the last two weeks outside the Chadian embassy in Bangui, waiting for a place on a truck headed for Chad.

“Our houses were burnt. We left with only the clothes we were wearing. They even threw grenades at us. It was people who joined the anti-balaka who did this. If we stay in our neighbourhood, they will kill us,” added Rabilou.

“Anti-balaka”, which roughly translates as “machete-proof”, is the generic name for militias formed to oppose armed groups that, in March 2013, under the umbrella of the now officially disbanded Seleka alliance, overthrew president Francois Bozize. Lacking any effective command structure, the rebels went on to commit widespread abuses against civilians in many parts of the country.

“But it wasn’t us who brought [newly installed] President [Michel] Djotodia to power!” said Rabilou. “Not all Muslims are eating at his table. We are also people, not animals. We are Central Africans, and we have rights in this country, but now all Muslims are considered foreigners. So we have decided to go and rest in Chad. Perhaps we will come back if it pleases God.”

Most of Seleka’s fighters were Muslim, and many were foreigners - mercenaries from Chad and Sudan.

Almost a million people in CAR have fled their homes amid a spate of attacks and killings committed across religious lines; most of the country’s 4.5 million inhabitants are Christian, and Muslims, especially Chadians, are widely perceived to be associated with or members of the ex-Seleka forces.

According to Chadian ambassador to Bangui Gen. Cherif Mahmat Dawsa, anti-balaka forces have killed eight Chadian soldiers deployed as part of a regional force in CAR. Some 57 Chadian civilians have been killed and dozens are missing, he added.

“These people want to go where there are no problems. We are taking our women and children to Chad because it is dangerous here. We don’t know where people will come from to attack us. We just want to protect our families,” said Salif Ahmat, who was also waiting outside the Chadian embassy.

Nearby was Hadja Rame Higa, who said she was born in the north of CAR “about 100 years ago.”

“I come from Bouca [450km north of Bangui]. They set fire to my house with all my belongings. They killed my two children; one was the local chief, the other a trader. They were both killed. My house was totally burned; I couldn’t take anything. I fled Bouca for Bangui, and now I have to flee Bangui to go to Chad,” she told IRIN.

The Chadian government established an air bridge and humanitarian corridor between Bangui and N'djamena on 22 December.

Since then, it has organized 52 flights airlifting 9,648 people and three road convoys carrying a further 9,000 people. (Citizens of Nigeria, Mali, Senegal and Cameroon have also been evacuated from CAR.)

In late December, Chadian Foreign Minister Moussa Mahamat Faki visited Bangui and publicly appealed to the people of CAR. “Chadians are not your enemies and never will be. Don’t let yourself be misguided by failed politicians who want to plunge you into an extremely perilous adventure.”

For his part, the ousted Bozize has denied having any connection with or control over the anti-balaka forces.

And the man who toppled him, Djotodia, in a televised speech on New Year’s Eve, condemned “all forms of xenophobia and at the same time the large-scale returns of long-term-resident foreigners to their respective countries. Because our country is and will remain a place of refuge and hospitality for all peace-loving people.”

Chadians or people of Chadian origin await passage back to Chad outside the Chadian embassy in Bangui, the Central African Republic. The country is embroiled in a spiral of violence across religious lines, with Muslim targeting Christians and vice versa. 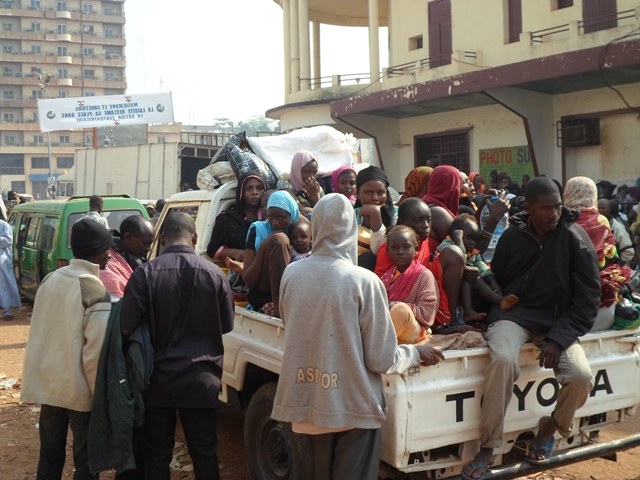 The exodus will have major ramifications for both CAR and Chad. People of Chadian origin - together with those from Cameroon and Nigeria - form the backbone of the trading and livestock sectors in CAR.

Major economic problems lie down the road, according to Richard Pouambi, chief of staff in CAR’s Ministry of Communications.

“Those who are leaving are traders, they are the tax payers, and without them the state will have trouble filling its coffers. Billions of francs [hundreds of thousands of dollars] are spent every day in KM5,” he said, referring to Bangui’s largest market.

Already, some foodstuffs are running short and speculators are buying up staples. Prices are generally rising. Civil servants have not been paid for three months.

Meanwhile, the numbers of people entering Chad “are moving upward very, very fast; the latest number is 19,000 as of 8 January”, Qasim Sufi, the head of operations in Chad for the International Organization for Migration (IOM), told IRIN. Sufi added that the total caseload might end up being five times that number.

The current figures include 200 unaccompanied children, he said.

After registration by the government, new arrivals are taken to transit centres in the capital and near the CAR border, where they are provided with medical care, food, and, for those who are traumatized, psycho-social support.

After a few days, the migrants are transported to their places of origin. As it with 150,000 Chadian migrants who returned from Libya between 2011 and 2013, IOM plans to help with economic reintegration and projects to ease tensions with host communities.

“However, for those who left the country long ago or were even born in the CAR, a different approach has to be found to address their needs, and IOM… is currently coordinating with the government of Chad to come up with a clear strategy for this latter group,” said Sufi, in an email.

He added that because the new caseload remitted large sums of money to relatives in Chad while living in CAR, “this migration crisis will have a bigger impact on the economical aspect of the country compared to the Libya crisis, where most of the migrants were predominantly in very low-income-generation sectors, such as drivers, farmers, guards, etc.”

He added: “Considering the estimated number of Chadian migrants in the CAR (more than 100,000), it is [a] huge challenge to both the government and the humanitarian community that is trying to meet their needs.

“For this reason, IOM, as the migration and the frontline agency, has just launched an appeal for funding (US$17.4 million) to try to meet their immediate needs, including the live-saving component of their evacuation from the CAR, and bring to them back to the safe havens in their places of origin.”