Read about what we achieved.
MAROUA

Mairam Umaru’s year-old son had suffered vomiting and fever on and off for a month before she sought medical help.

“I thought it was my milk affecting him, or that he was teething,” said the 17-year-old mother at the referral hospital in Maroua, the capital of Cameroon’s Far North Region, where her son was being treated for severe acute malnutrition and other complications.

Around a dozen mothers watched over their sick children in the ward. Some 58,000 children under the age of five have suffered severe acute malnutrition in Cameroon’s Far North and North regions this year, according to the UN Children’s Fund (UNICEF).

Many Cameroonians know little about malnutrition, and the condition is not properly addressed as a public health problem, health experts say.

Many see malnutrition only as a problem of insufficient food, and are perplexed that the ailment abounds in a country with strong agricultural production - a view that overlooks unequal food distribution and access in the country as well as other factors that contribute to the illness.

Severe acute malnutrition is highest in the arid Far North and North regions, but it is also high in Adamaoua and the East regions. And chronic malnutrition afflicts children in seven of Cameroon’s 10 regions.

“This is the hidden face of Cameroon,” said Ines Lezama, a nutrition specialist with UNICEF, referring to chronic malnutrition, which has affected 1.4 million Cameroonian children in 2013.

At the Maroua referral hospital, 24-year-old Saratou Tagau told IRIN that she did not know about malnutrition. “I only know of malaria,” said Tagau, who brought her baby daughter in for treatment as the girl’s condition worsened - 20 days after realizing that her daughter had developed oedema. Malaria is common in the North and Far North regions, and a recent outbreak sickened hundreds of thousands of people.

“It is a problem of education, culture. It’s like an insult when you tell somebody that their child is malnourished. Yet this is a health problem like any other,” said Georges Okala, a nutrition specialist with Cameroon’s Ministry of Health. “It is important that parents understand that when their child is underweight and not growing normally, there is a problem, and they should know what is causing that problem.”

Malnutrition is responsible for 38 percent of deaths among children under age five in Cameroon, and one out of three children is stunted. Forty-four percent of chronically malnourished children in the 11-member Economic Community of Central Africa States (ECCAS) are in Cameroon, according to UNICEF.

The primary causes of malnutrition are disease and inadequate food. But lack of education, poor quality and inadequate health services, poverty and detrimental health practices add to these conditions in Cameroon. Poor sanitation, for example, can cause diarrhoeal diseases that give rise to or exacerbate malnutrition. And early marriage for girls - largely among northern Cameroonians - also contributes to malnutrition, as younger mothers are less likely to be educated or empowered to advocate for their children’s health.

Cameroon’s northern regions are some of its most deprived. Although the country has nearly twice the minimum World Health Organization recommended doctor-to-patient ratio, the northern region has few health workers, according a recent report by the World Bank.

Cameroon is currently revising its 2006 national nutrition policy to incorporate the economic, development and social sectors and devise broader measures to cut malnutrition rates. In March, it joined the Scaling Up Nutrition (SUN) movement, which engages governments, the UN, NGOs and researchers to improve nutrition.

Mother and child in hospital in Cameroon’s Maroua town. Malnutrition in Cameroon has affected some 58,000 children in the country’s North and Far North Region in 2013 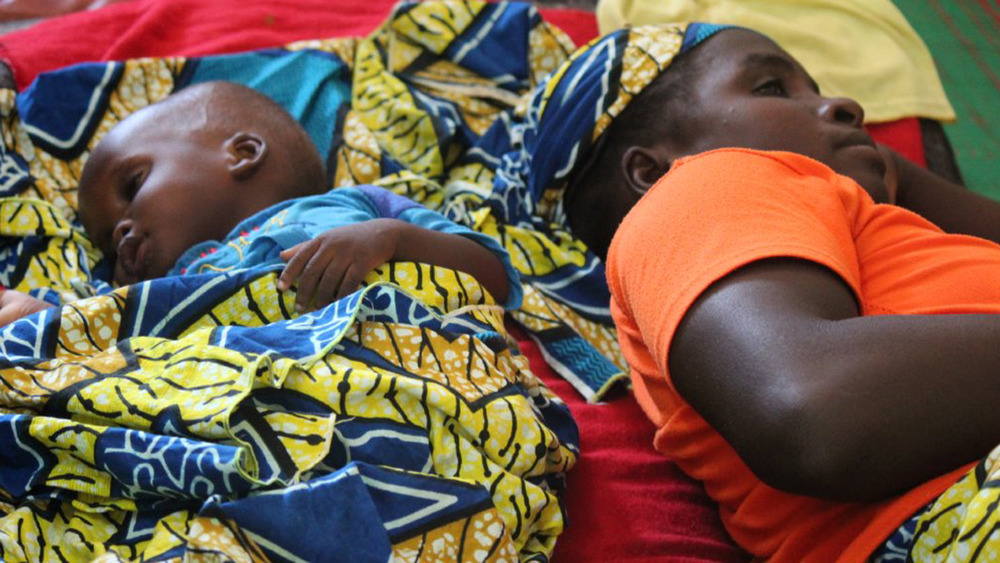 “The issue of nutrition has so far been considered only as a public health and sanitation matter. But the effects [of malnutrition] are not only related to health and sanitation. There are economic consequences. If we do not take things seriously, it’s the future of the country that’s in jeopardy,” explained Okala of the health ministry.

The new policy, to be implemented in 2014, will seek to promote breastfeeding, increase food security, fortify foods with key nutrients, and boost nutrition supplements to mothers and children, among other strategies.

“We are lobbying all sectors to perceive malnutrition as a development problem,” Okala said. “It is important that we act together - that all the sectors work together to resolve the problem - because the health sector alone cannot resolve the problem.”

Aid groups working in northern Cameroon said that people were beginning to understand the problem of malnutrition. “People are becoming aware that malnutrition is a disease. The mentality is beginning to change. When a child leaves hospital cured, it encourages others to bring their sick children for treatment,” said Amal Mustafa, who heads the French Red Cross’ delegation in Maroua. The aid group is treating malnutrition in the region.

The 2012 floods and recent floods in September, as well as the 2011-2012 Sahel food crisis, have brought aid groups to northern Cameroon, where the World Food Programme and the Food and Agriculture Organization estimated earlier this year that there were 38,900 severely food insecure people and 173,000 others who are moderately food insecure.

The region has also seen an influx of thousands of Nigerian refugees following the Nigeria’s military operations against Boko Haram insurgents and attacks by the radical Islamists.

Koffi Paulin, a doctor with the French Red Cross in Maroua, said that the short lifespan of emergency aid intervention precluded producing any longer-term impact on the nutrition crisis. For instance, he said, there was not enough time to train local medical staff.

“You race to implement a programme within one year [the normal funding cycle] because you don’t know whether it will be renewed,” said Paulin.