Read about what we achieved.
RUMPHI

Parts of Malawi, including large parts of the northern region, have not received rain since February 2013 and are now experiencing severe water shortages. Women in the affected areas are leaving their homes in the early hours of the morning and walking up to 40 minutes to fetch water from the closest source.

“One will have to be up and on their way to the nearest borehole by midnight if she is to be in a position to get water, because by that time several other people will already have lined up for the same,” said Lucky Chadewa, who lives in Chikwawa in northern Malawi’s Rumphi district.

The water table has dropped as the rainless days have continued and boreholes yield less water or even dry up. The women wait for them to refill rather than return home empty-handed. “It is totally just by luck that one gets… [any] these days because after filling just a few buckets, the borehole stops producing water,” Chadewa told IRIN.

Women often leave their buckets in the queue at the borehole and rush back home so they can get their children ready for school. But when they return they find that their buckets have been pushed to the back of the queue and they may spend the rest of the day waiting to fill them.

In its latest update, the Malawi Vulnerability Assessment Committee (MVAC) - composed of the government, UN agencies and NGOs - has identified 24 districts across the country that are experiencing critical food shortages as a result of erratic rains. Rumphi is one of three such districts in the northern region. The MVAC update estimates that 1.85 million people will need food assistance until the next expected harvest, in March 2014.

In Rumphi, Karonga and Mzimba districts the rainy season, which normally extends into May or June, got off to a late start and ended in February. “By the time the rains stopped in the affected areas, the amount of water that had penetrated the ground was definitely not enough to either maintain the water table or raise it. This is why the boreholes are not giving the right amount of water,” Mahara Nyirenda, a climate change expert with the Development Fund of Norway, told IRIN.

"If you delay in waking up and getting to the borehole, just forget about water on that day"

Tiwonge Moyo, a resident of Euthini in the western side of Mzimba district, said the women in her area were also leaving home very early in the morning to reach the local borehole before it ran dry. “If you delay in waking up and getting to the borehole, just forget about water on that day,” she told IRIN.

She said the river beds that women normally dig into to reach water during the dry season had also stopped yielding any. “This is the first time that we are literally getting no supply from these streams. It is dry sand wherever you can dig.”

The situation looks set to worsen as the current rainy season also appears to be getting off to a late start. So far, only a few days of heavy rain fell in early October.

Residents in Karonga told IRIN that the lack of functioning boreholes has forced them to use water from unprotected sources. “Clean water is greatly needed here. The water in the few shallow wells that have not dried up yet is not safe,” Gladson Kibira, a resident of Mwakasangira village in the northern part of the district, told IRIN.

“When the area experienced flooding earlier this year, the running water swept so many things, including animals, into the wells. These animals most likely died there and that is the kind of stuff that we are drinking when we turn to the shallow wells.”

As water sources in many parts of northern Malawi have dried up due to a lack of rain, long queues form at those boreholes still functioning. 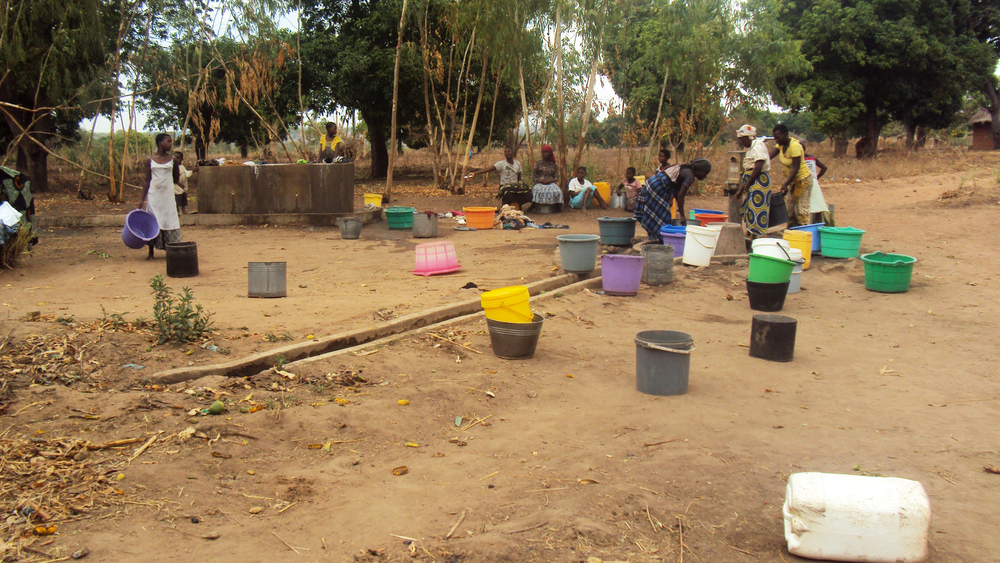 Although there have been no confirmed outbreaks of waterborne diseases resulting from the shortages, those people living in areas with poor rainfall told IRIN they were concerned about not having enough water for hygiene purposes, like hand washing after using the toilet.

The Director of Planning and Development (DPD) for Karonga district council, Emmanuel Bulukutu, told IRIN that interventions to combat the water shortage depended on donor assistance. “The boreholes are usually drilled by humanitarian organizations working in the water and sanitation sector,” he said.

Frank Mkandawire, the Director of Planning and Development for Rumphi, said most interventions relating to water and sanitation in his district were longer term, such as plans to replace the water piping system, and reforest the water catchment areas. Besides low rainfall, he suggested that the drying up of water sources was linked to deforestation in these locations.

John Paul, the Project Manager for Building Community Resistance to Climate Change (BCRCC), a project run by the agriculture NGO, Total Land Care, told IRIN that the current water shortages are threatening food security. Households usually make use of nearby water sources to put in place rudimentary irrigation systems in years when rainfall is erratic, but these sources have dried up due to the low water table, making this impossible.

“This low water table will also have some effects on the coming farming season, although the gravity of these effects will differ from one soil type to another,” he said. The dryness of the soil could delay planting, as it would take some time for sufficient moisture to accumulate to support seed germination.

“The current situation is also most likely going to worsen if the beginning of the rainy season continues to delay,” said Paul. “With these dry spells, the soil layer above the water table is always hot and dry. This promotes evaporation from the water table, hence lowering it [further].”