Cash-for-work initiatives to clean up the city of Tacloban are creating an impetus for thousands of survivors to get back on their feet. “This money will make a huge difference to my family,” Bernard Morteja, 34, said in the battered city, holding up a crisp 500 peso (US$11.42) note he had just received from the Taiwan-based Buddhist Tzu Chi Foundation, a charity working in the Philippines to clear the streets of debris and rubble left by the winds and storm surge of Typhoon Haiyan.

"I am happy. Not only can I earn some money, I’m also helping my community,” he said. His family has been struggling to get by on relief assistance since the category 5 storm struck on 8 November, affecting more than 14 million people, displacing more than 3.5 million, and leaving more than 5,000 dead across the central Philippines.

According to preliminary estimates, the storm left behind some 1.1 million cubic metres of debris in the city, comprising rock, concrete, timber, metal, and in some instances, bodies. More than three weeks on, dozens of bodies were found under a bridge on 1 December.

Maps using satellite imagery reveal a 13.5 square km area of damaged or destroyed homes and buildings in the city.

Since Tzu Chi’s first cleanup operation was announced, more than 20,000 people have participated in the cleanup operation, which is being undertaken in collaboration with municipal authorities. Enthusiastic crowds, young and old alike, have been organizing themselves in groups of 10 armed with brooms, shovels and other tools.

"As you can see, the streets are already getting cleaner," Monica Sy, a Tzu Chi volunteer and representative from their headquarters, told IRIN, citing the ability of teamwork to empower people affected by disaster.

Tzu Chi is not the only group to recognize the importance of cash-for-work in cleaning up the city. Both the United Nations and the Philippine Department of Labour and Employment (DOLE) have launched similar initiatives, as have a number of civil society organizations, offering participants 260 pesos ($6) a day in line with government guidelines for cash-for-work initiatives.

On 21 November, the UN Development Programme (UNDP) began cleaning up a school in the town of Palo outside Tacloban, followed by a series of street and church clean-up operations in the city.

Hundreds of people have taken part in the scheme, with more expected to join.

“Cash-for-work restores people’s sense of purpose and dignity, while at the same time injects money into the local economy,” said Lesley Wright, UNDP’s communications officer in Tacloban. “Aid is great, but people need to be able to go to the market and afford their basic needs.”

UNDP ran a similar programme in Indonesia, involving more than 1,450 participants a day, many of them women, in the aftermath of the 2004 Indian Ocean Tsunami. Over a two-year period, more than 54,000 people were temporarily employed by UNDP’s cash-for-work schemes in the northern province of Aceh on the island of Sumatra, assisting in the removal of more than 1,300,000 cubic metres of tsunami debris. 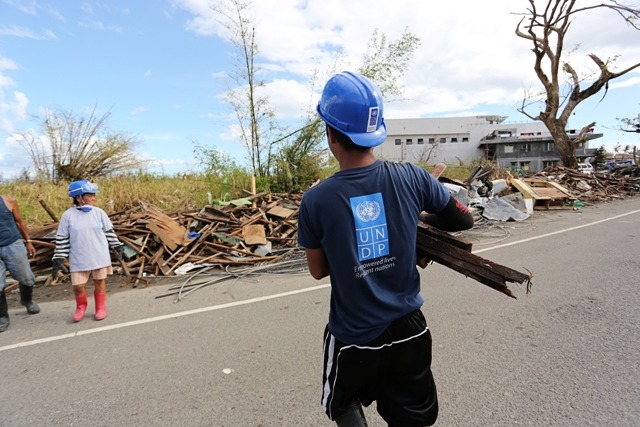 Philippine local authorities are following suit, with the Tacloban Employment Service Office, an agency under DOLE, employing more than 4,000 people to participate in a 15-day cleanup operation that began on 20 November.

Under this scheme, teams of 30 with shovels and picks have been deployed to nearly 140 neighbourhoods (barangays) throughout the city, and additional groups have been sent into areas where there are churches or hospitals.

"Mountain-piles of debris are being collected each day. It’s a massive task,” said Emilia Cruz, manager of the public employment service office (PESO), an agency under DOLE.

These efforts are being welcomed by city authorities. "We are really grateful for what they are doing,” said Tecson John Lim, the city administrator.

In any large-scale disaster cleanup there are always health and safety concerns. "We strongly recommend workers wear protective equipment such as rubber boots, gloves, masks and hard hats,” said Gloria Fabrigas, cluster head of the city’s typhoon task force for health and sanitation.

Under World Health Organization (WHO) guidelines, to avoid the risk of cuts and injury, as well as possible infections, protective clothing and closed shoes, if available, should always be worn by anyone involved in the clearing and sifting of debris, while tetanus vaccines should also be offered.

As a preventive measure, around 3,000 cash-for-work participants of the government’s programme were given tetanus shots and prophylaxis for leptospirosis  before the programme started.

UNDP has incorporated similar health and safety measures into their activities on the ground.