A mapping exercise to register businesses and infrastructure in Mogadishu, Somalia’s capital, aims to provide the government an opportunity to engage in urban planning, raise revenue to fund civic programmes and help settle land disputes, which are increasing as people return to their former homes after decades of conflict.

The Sustainable Employment Creation and Improved Livelihoods for Vulnerable Urban Communities in Mogadishu (SECIL), a joint project between UN-Habitat and the Somalia government, is developing a geographical information system (GIS)-based inventory of public, institutional and economic infrastructure in all 17 Mogadishu districts.

It provides district-level detail about enterprises, where they are located, their size, the number of employees and access to basic infrastructure. It also gives a description of goods sold or produced, or services provided, as well as the source of the goods.

The programme uses satellite images and prominent persons - who help to identify business owners and abandoned buildings- in the districts to help map the businesses.

Clare Sadd, a programme support expert at UN-HABITAT, told IRIN: “In Mogadishu… there is an urgent need to coordinate, control and guide developments. Lack of urban planning will increase the already existing chaos, lead to construction at undesirable locations, duplication of efforts, omission of space allocation for municipal services - developments that are very difficult to correct after they have taken place.”

"To make sure that we are able to continue improving our revenue collection methods, we are planning to build our institutional capacity, such as putting professional staff in place as well as the creation of correct financial procedures."

A SECIL newsletter said the programme is expected to “maximize employment opportunities and customers’ access to improved infrastructure, and to stimulate a chain of economic activities.Management structures such as vendors' associations or cooperatives will be set up and their capacity built to guarantee sustainable management that, among other tasks, will be responsible for organizing cleaning, maintenance, fees/licenses, and comprehensive waste management solutions such as composting.”

Traders and businesses are expected to pay an annual license fee of US$135, collected by Mogadishu Municipality. The mapping exercise will help enforce payment, and will help also to identify any abandoned public assets such as libraries, schools and health facilities.

In Mogadishu, land registers have been destroyed and buildings abandoned. Maps are out of date, and a functioning tax system is only now beginning to be implemented. According to UN-HABITAT, “Almost everything [in Mogadishu] is up for grabs (or at least for sale), and transparency, equitable access to services and respect for human rights are the first victims in such a context.”

Somalia’s “towns are a bundle of casually, haphazardly laid-out buildings, and a multitude of users fight over the same unorganized public spaces,” the agency’s website says.

“We collect $6 million per month [mainly from the port], but the previous government used to collect $2 million per month. We want to raise this figure progressively, but the government is not in full control of the country so we cannot collect as much revenue as wished to do,” Mohamud Hassan Suleiman, the minister of finance and planning, told IRIN.

But he was optimistic: “To make sure that we are able to continue improving our revenue collection methods, we are planning to build our institutional capacity, such as putting professional staff in place as well as the creation of correct financial procedures." He added, “We are currently developing regulations to levy VAT [value added tax], but this may take months - about two months maybe.”

According to the Central Bank of Somalia, internal revenue generation currently accounts for about 2 percent of the country’s $6.1 billion GDP. (According to a recent study by the charity African Development Solutions (Adeso), an estimated 750,000 Somalia nationals living abroad - many of them in Europe and the US - remit an estimated $1.3 billion annually.) 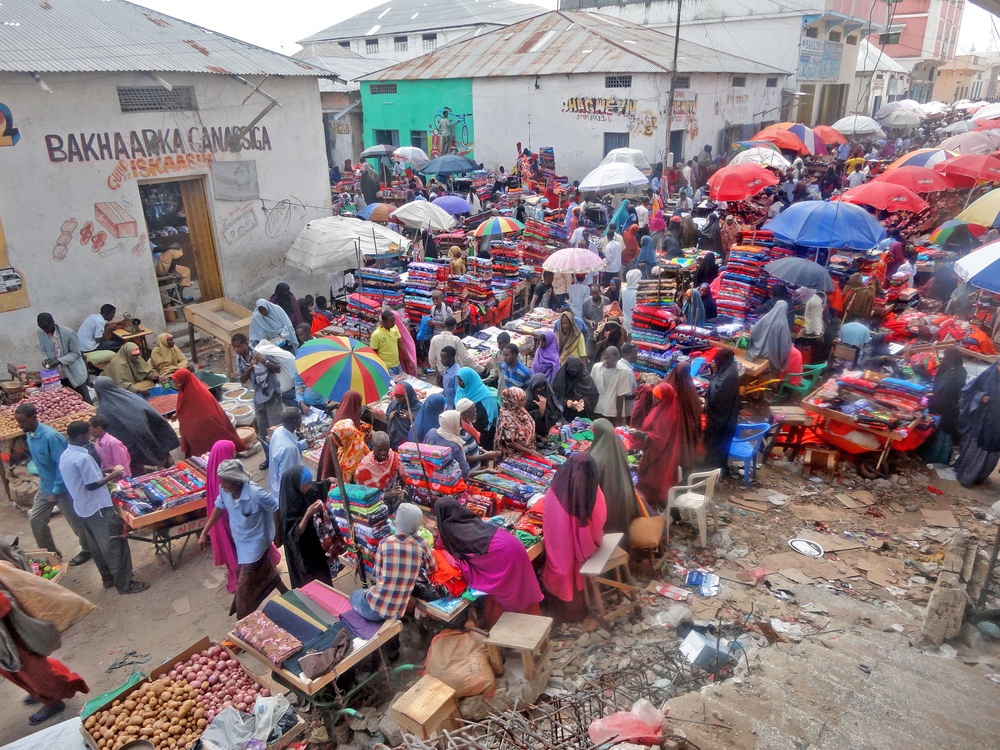 The government wants to use the money collected as a result of the mapping scheme to fund services such as the provision of water, roads and solid waste management.

Much of rural Somalia remains under the control of militants, and the country’s security situation remains precarious, but in Mogadishu people are beginning to rebuild their homes and business premises. Government offices are being refurbished, and new restaurants are being opened - a sign the country could finally be turning a corner.

In late September, Makhtar Diop, the World Bank’s vice-president for Africa, said: “This progress in peace and development has attracted the return of tens of thousands of Somalis. Today, Mogadishu is in the midst of an economic revival, driven by a building boom, new international airline routes, rising trade out of the city’s port, and renewed hope in a new, more promising era.”

Diop continued: “After decades of conflict and neglect, the new government has inherited a barely functioning state with limited ability to raise public revenues to finance a formidable array of development needs.”

The European Union has pledged $2.4 billion to help rebuild the country. This is in addition to an earlier promise of about $350 million by donors at a conference held in London in May.

Economic planning is needed to make the most of the new investments in the country, say experts.

“If the city is comprehensively mapped with assets and deficiencies determined, and this system is accessible to a variety of stakeholders, then we can create viable strategies for development, management and governance. Until then, any aid initiative will be somewhat arbitrary because there is no way to clearly identify and assess those areas most in need, let alone produce desired project outcomes,” Mitchel Sutika Sipus, an urban planning expert at the American University of Afghanistan and adviser to Mogadishu’s mayor, told IRIN.


Stabilization has meant Somali nationals are beginning to return home, bringing with them a variety of challenges.

Returnees are finding the properties they abandoned during the conflict now inhabited by internally displaced persons (IDPs), many of whom fled rural homes for the relative safety of urban areas. Land disputes are now the biggest source of conflict in Somali towns.

In August, for instance, reports emerged of the eviction of IDPs from the Zona-K camp on the outskirts of Mogadishu, after private landowners - many of whom had returned to Somalia from the diaspora - laid claim to the land the camp was built on. The Zona-K IDP camp is home to an estimated 40,000 IDPs.

The UN Office for the Coordination of Humanitarian Affairs estimates there are 1.1 million IDPs in Somalia, 369,000 of them in Mogadishu.

Mogadishu is also struggling to accommodate the influx of returnees. Roads need to be cleared and repaired; sanitation and access to water needs to be improved; and systems need to be developed to manage property ownership and acquisition.

“A devastated physical infrastructure and weak markets are the most obvious problems as a result of war. There are also no birth certificates, no licenses, no business registration systems, and no truly useful and accurate maps that are widely accessible,” said Sipus.

Somalia will also need to stem corruption if its citizens are to benefit from the new tax revenues. A recent report by the UN Monitoring Group on Somalia and Eritrea indicated that while the Mogadishu port - the country’s biggest source of internal revenue - generates an estimated $3.8 million monthly, just $2.7 million was deposited in the country’s central bank between August 2012 and March 2013.

The UN report revealed that 33 percent of the monthly port operations revenue was unaccounted for in 2012.

According to a recent brief by the Mogadishu-based think tank Heritage Institute for Policy Studies, while the fact that “economic development, the provision of social services, and the collection of revenue are necessary for the prosperity of Somalia is not in dispute… [they] require a stable and secure environment.”