Two weeks after a tropical cyclone struck the northeast coast of Somalia, killing more than 100 people and thousands of head of livestock, important infrastructure lies in ruins and fears of an outbreak of waterborne diseases are mounting.

The storm struck the autonomous region of Puntland from 8 November.

“Many wells in the provinces of Eyl and Dangorayo collapsed during the storm. There are also numerous dead livestock lying around. This has contaminated the water sources for thousands of people,” said Kwame Darko, the health delegate of the Somalia delegation of the International Federation of the Red Cross and Red Crescent Societies (IFRC), in a 21 November statement.

“We need to ensure clean drinking water is made available for those affected by the cyclone, otherwise there is a very strong chance we will start seeing cases of diarrhoea and other waterborne diseases.”

Darko added that some 757 people had been treated over three days for skin-related diseases and acute respiratory infections.
In an update the UN Office for the Coordination of Humanitarian Affairs (OCHA) noted that, “There is dire need for safe drinking water in some of the remote villages where the storm damaged or destroyed all sources of potable water.”

The cyclone, which hit the low-lying areas of Dhoon Goroyo and Eel Madobe in the Nugaal and Hafun regions, led to the deaths of at least 140 people, with 300 others missing, according to Ali Abdi Warsame, Puntland’s minister for health.

Ahmed Hassan Ismail, a father of five, lost all his children in the cyclone. He only recovered three of his children’s bodies.

A lack of humanitarian access has exacerbated the situation. Hawa Ali, a mother of six, told IRIN that two of her children died due to hunger. “My six-year-old child died on my lap. I lost all my tears, and can’t imagine this happening to me,” she said. 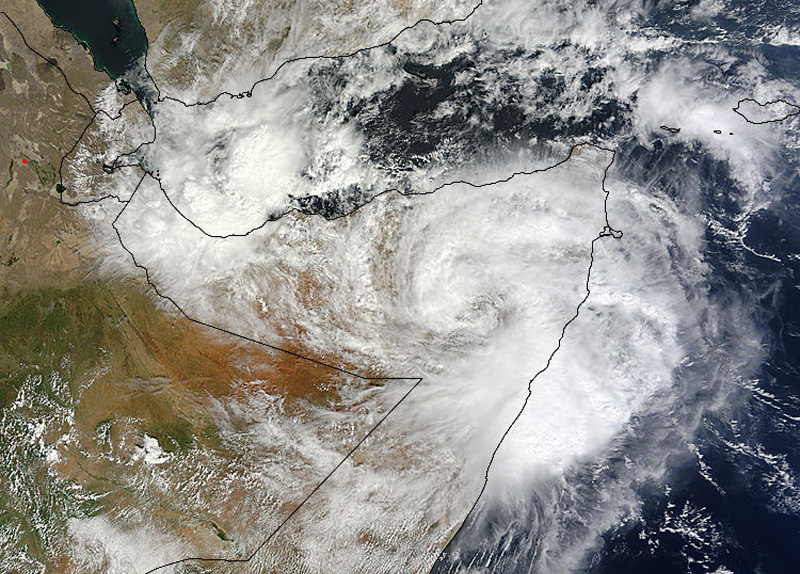 Dahir Mohamed lost all livestock. “I lost 1,000 goats; I was with them when the storm started deep in the bush. They all died in dozens, helpless [against] the strong winds. I even feared for myself but thank God I’m safe,” he said.

According to Minister Warsame, the cyclone has especially been detrimental to the pastoralist community, which trades its livestock products such as milk and meat for other commodities.

“Although the number of people who have died in Somalia is not as large as those affected by Typhoon Haiyan  in the Philippines, the cyclone has caused tremendous death and destruction in an area that is already vulnerable to food shortages and malnutrition. For the pastoralist communities, the loss of their livestock could lead to an even greater number of people dying,” stated Degan Ali, Adeso’s executive director, in a 21 November press statement.

The executive secretary of the Intergovernmental Authority on Development (IGAD) in a statement reiterated Somalia’s government appeal for international aid: “Given the extent of the effects of the flood, the capacity of the government of Somalia is limited. I, therefore, on behalf of IGAD, appeal to the donor governments, IGAD member states, humanitarian agencies, [and] international and regional organizations to respond positively and expeditiously to the appeal made by the government of Somalia.”

“I am happy that the strong coordination among the humanitarian community and Puntland authorities has led to good emergency response to nearly 30,000 people affected by the tropical storm since 11 November. We now look forward to establishing the medium-to-longer-term needs for affected communities to support and rebuild lost livelihoods including restocking of livestock,” said Brady.