He’s in a church, but his mind is not on God. Seventy-year-old Rodolfo Susaya, a retired newspaper vendor, is one of hundreds of survivors crowded into the Redemptorist Parish church in Tacloban, now serving as a temporary shelter in the wake of Typhoon Haiyan, which struck the central Philippines on 8 November.

Suffering from chronic asthma and unable to work, he can barely bathe without assistance. He wonders out loud how he will survive, and begins to cry. "I lost my wife and my daughter," the elderly man says. "How am I supposed to live?"

"We know from previous emergencies that older people will be affected disproportionately by the disaster, and are more likely to be among the casualties and fatalities,” said Marcus Skinner, the humanitarian policy manager for Help Age International, a global advocacy group for older people.

“Older people who have fled [the cyclone] will face major and specific challenges in meeting their needs, including loss of mobility aids, physical security and access to information and services," he noted.

According to the Philippine Coalition of the Service of the Elderly (COSE), close to 800,000 people over the age of 60 were affected by the storm. More than 46,000 of the displaced elderly are either in evacuation centres or staying with family or friends, but those without relatives or a support network are particularly vulnerable, the group said.

When older people decide to flee, they often run the risk of becoming separated from family and friends, and ending up in the unfamiliar surroundings of evacuation centres where no one knows who they are.

“It is critical therefore that, along with children and mothers, the nutritional needs of older people are recognized and addressed in food security responses and nutrition status monitoring,” said Rosaleen Cunningham, a communications officer working for Help Age in the typhoon-affected area.

An elderly woman inside the remains of her home in Tacloban in the aftermath of Typhoon Haiyan, which struck the central Philippines on 8 November 2013 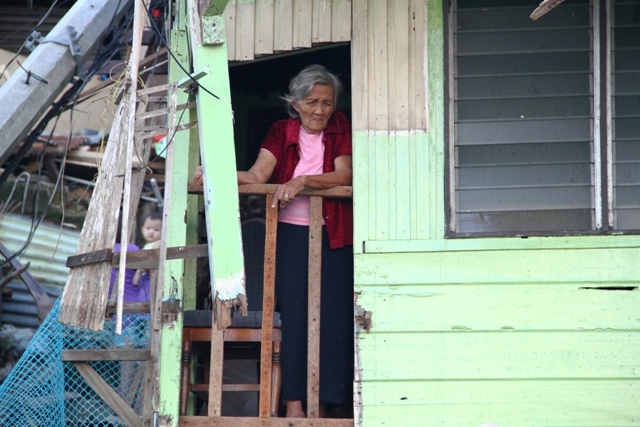 Chronic diseases are among the top three causes of mortality in the Philippines, and often disproportionately affect older people, health workers said. This underscores the importance of continuity of care for older people affected by chronic conditions in order to avoid unnecessary complications and deaths, which the authorities say they are working hard to do.

But in the overwhelming scale of a disaster like Typhoon Haiyan it is not difficult for the plight of the elderly to be overlooked, making it imperative that their needs are recognized and addressed early on.

“It’s just too easy for these people to fall through the cracks,” Fransiskus Kupang, the executive director of COSE, told IRIN.

Help Age has expressed concern that the needs of older people were not better spelled out in the recent Humanitarian Action Plan, launched by the international humanitarian community on 12 November in a bid to raise more than US$300 million in assistance for the next six months.

Age-friendly spaces are well-designed for the needs of older people, are well-lit, and have easy access to emergency exits. Water and sanitation facilities, and food distribution points also need to be accessible for those with reduced mobility, Cunningham stressed.

She pointed out that small and inexpensive modifications such as grab-rails in shower and toilet facilities, with separate queues at distribution points, can make enormous differences to the ability of older people to be self-reliant.

According to a 2012 study by Help Age, approximately 11 percent of the world's population is aged 60 and above, but less than 1 percent of humanitarian aid - allocated via the consolidated appeals process (CAP) and flash appeal process - was earmarked for older people in 2010 and 2011.

The World Health Organization has noted that the number of people aged 60 and above is set to triple, reaching two billion by 2050.