Read about what we achieved.
MANILA

Aid agencies are bracing for the worst after Typhoon Haiyan slammed into the Philippines in the early hours of 8 November, triggering landslides, heavy flooding and affecting tens of millions of people.

“We are working closely in support of government and local authorities to assess the life-saving needs of the people affected by this typhoon,” said Julie Hall, acting resident and humanitarian coordinator in the Philippines.

With sustained winds of 315km per hour and gusts as strong as 380km per hour, the category five super typhoon, locally known as Yolanda, struck the central island of Samar before moving west. Heavy rain flooded many areas, with wind felling trees and ripping rooftops from homes. The full extent of the damage remains unknown.

According to the Department of Social Welfare and Development, 36 million people across 37 of the country’s 82 provinces were affected.

While there were no immediate reports of large-scale casualties - only three reported deaths so far - the Global Disaster Alert Coordination System warned that Haiyan could have a "high humanitarian impact" due to its strong winds and the vulnerability of the affected population, while the International Federation of Red Cross and Red Crescent Societies said the humanitarian impact threatened to be “colossal”.

Close to 750,000 residents were pre-emptively evacuated and are now staying in 664 evacuation centres in 31 provinces, the National Disaster Risk Reduction and Management Council reported on the evening of 8 November.

Schoolchildren as well as government workers were sent home, while flights were grounded.

President Benigno Aquino said he had placed all emergency services on full alert, as well as put on standby at least 20 Navy boats and "fully mission capable" air assets for quick response as the storm's nearly 600km diameter coverage area was expected to affect virtually all of the Philippines.

"Aside from strong winds, rain, the overflowing of our rivers, and the possibility of `lahar’ [mudflows] from Mayon and Bulusan volcanoes (in the eastern Bicol region), we are likewise monitoring the threat of storm surges in more than 100 areas," Aquino said. "Waves in these areas may reach 5-6 metres." 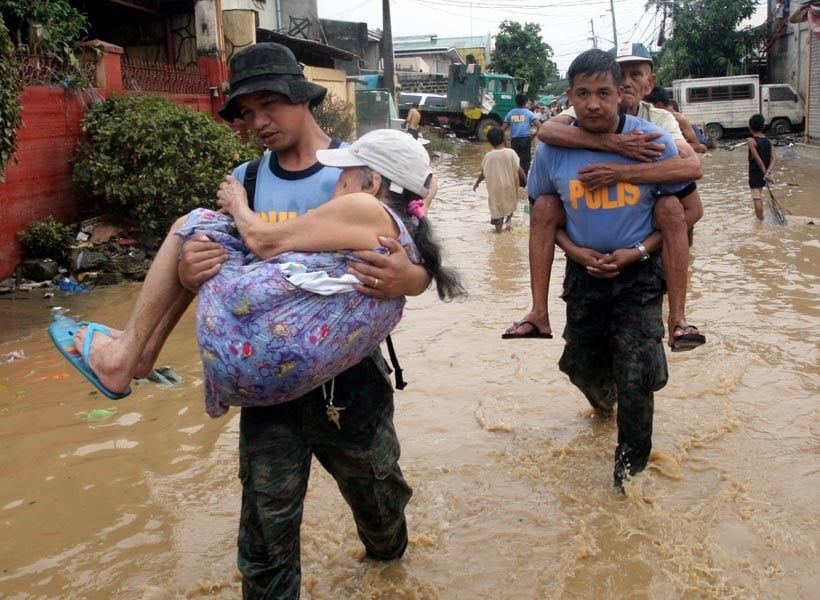 State weather experts said Haiyan was the strongest weather disturbance this year, even stronger than Typhoon Bopha, the strongest in 2012, which ravaged the southern Mindanao region and left 2,000 dead in landslides and flash floods.

Many in the central Philippines are still vulnerable following a 7.2 magnitude quake that struck the central island of Bohol on 15 October.

According to the UN Office for the Coordination of Humanitarian Affairs (OCHA) on 7 November, of the more than 350,000 still displace by the earthquake, the vast majority are opting to stay in mainly makeshift tents outside evacuation centres.

While Bohol was not in the direct path of the typhoon, it was still whipped by heavy rains and powerful winds, adding misery to the quake evacuees.

"People were already in emergency shelters and [under] tarpaulins and the Red Cross has to move those on shorelines away in case of storm surges. They were very vulnerable,” said Nichola Jones, a spokeswoman for the International Committee of the Red Cross team in Bohol.

"The most immediate concerns will continue to be shelters because there could be health problems for people who continue to live outdoors and in makeshift camps," she said.

Catholic Relief Services country head Joe Curry, who is also in Bohol, told IRIN the island was battered by heavy rain but appears to have been largely spared. He noted, however, it could take days before they had a full grasp of the storm’s impact and its effect on ongoing quake relief efforts.

He said an assessment was to be carried out to determine whether the heavy rain had displaced those in IDP camps.

Oxfam said the poor central provinces of Samar and Leyte were the hardest hit by Typhoon Haiyan, with communications and electricity lines down.

On average 20 typhoons strike the Philippines, an archipelago nation of more than 100 million inhabitants, every year, making it one of most disaster-prone countries in the world.