"The IDP population that relies on water from ponds will [be affected] as [water supplies] progressively dry up. In other locations, hand dug wells or boreholes will also dry up," Olivier Le Guillon, water, sanitation and hygiene (WASH) cluster coordinator for the UN Children's Fund (UNICEF) in Yangon, told IRIN.

Drinking contaminated water can cause skin infections, along with other infectious diseases of the alimentary system transmitted via the faecal-oral route, such as hepatitis A, he warned.

"Serious outbreaks such as cholera also need to be considered as a possible impact."

Although the prevalence of skin infections and diarrhoeal disease are more severe during the rainy season, drinking water shortages will intensify during the dry season, said Vickie Hawkins, deputy country director for the medical charity Médecins Sans Frontières (MSF) in Myanmar. "This brings increased risks of water-borne diseases as people resort to untreated water."

WASH data from June found that 40 percent of IDPs access water from ponds, while 28 percent are using treated water, and 7 percent of those in camps have insufficient access to water, the Rakhine Response Plan reported.

Who will be worst hit?

Most IDPs are Rohingya Muslims in and around Rakhine's capital, Sittwe, while those camps outside Sittwe are in low-lying coastal areas accessible only by boat.

During the dry season, which runs from November to May, access to water will be particularly difficult for those displaced in isolated villages and communities, such as Pauktaw and Myebon, with limited or no access to basic services.

"The WASH response in the more remote camps of Pauktaw and Myebon is a challenging undertaking and the longer IDPs stay in the camps, many of which are on sites not suitable for large numbers of people, the more difficult it will be to maintain standards," Hawkins said.

In Myanmar, the dry season comes in March and April rendering some people uneasy about what they will do to have enough good clean water. The clean water pond in the photo is shared by the cyclone affected communities – originally it was for one, but th 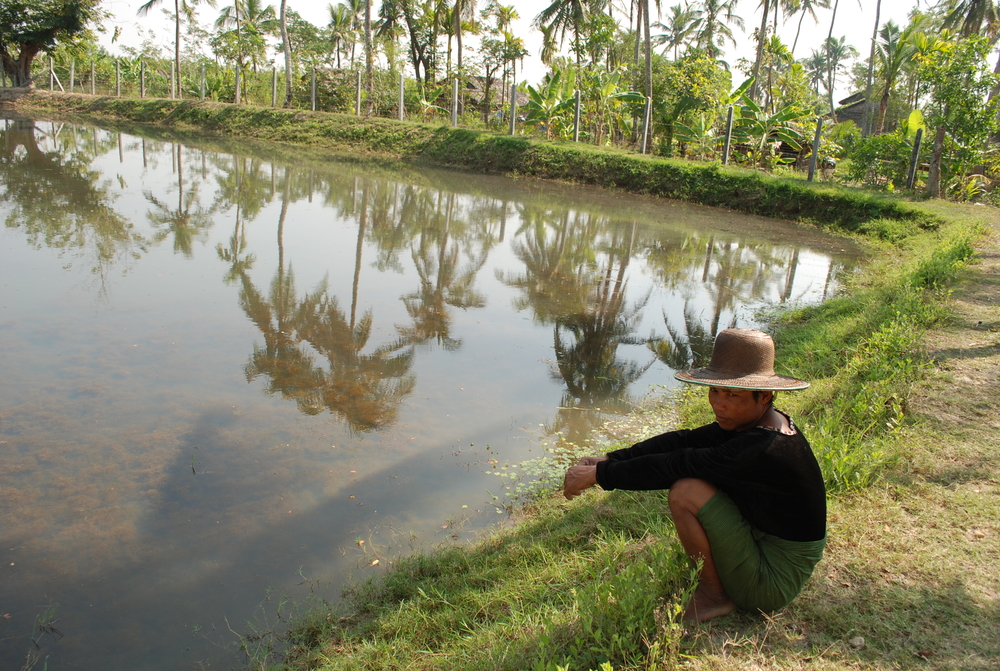 Relief International is currently partnering with UNICEF in Myebon Township to renovate ponds, which involves elevating the perimeters of ponds to prevent dirty water draining in. During the dry season, the only source of water for domestic use is from ponds, as supplies of rain water in catchment tanks run out.

Aid workers need to scale up water distribution efforts in these hard-to-reach areas, Le Guillon said. "In areas without land access, this can be achieved through `water boating.'"

He acknowledged, however, that transporting water by boat, as well as by truck to camps with road access, is costly and unsustainable. "These methods should be deployed only as the last solution in emergency situations."

UNICEF is planning to lead a survey by the national WASH cluster in 2014, which will aim to better evaluate the potential of spring catchments.

Discussions are also in progress about undertaking a geophysics survey, Guillon said.

"A better understanding of the hydro-geological environment should be developed in order to identify the possibility of drilling boreholes," said Guillon.

Mapping the location of water sources, "long houses" (made of bamboo and housing up to eight families in eight rooms), latrines and bathing cubicles (a tank of water and a bucket surrounded by plastic sheeting), will enable aid workers to better monitor and address WASH concerns overall, Hawkins said.

"WASH activities need to be scaled up and dramatically improved by all aid agencies and government partners working in Rakhine," she added.

According to the UN Office for the Coordination of Humanitarian Affairs (OCHA), more than 176,000 people are in need following two bouts of inter-communal violence between Buddhist ethnic Rakhine and Muslim Rohingyas in June and October 2012, which left 167 people dead and more than 10,000 homes and buildings destroyed.

Of these, 140,000 IDPs, mostly Rohingya Muslims, are living in more than 70 camps and camp-like settings, with another 36,000 vulnerable people in 113 isolated and remote host communities in Minbya, Myebon, Pauktaw, Mrauk-U, Kyauktaw and Sittwe in Rakhine State.

Last year aid agencies chlorinated the water in ponds. However, in some instances water quality levels were too low, forcing aid workers to truck water in, and in some cases even bring in bottled water.