During disasters, girls fare worse than the rest of the population, according to a new report released on 11 October by child rights NGO Plan International.

“Men, women, boys and girls experience disasters in different ways. Pre-existing inequalities and vulnerabilities will be exacerbated in disasters and will affect girls and women more,” said Plan International regional director Gezahegn Kebede at an event for the launch of the report.

“In emergencies, given their gender, age, and humanitarian status [girls] experience triple disadvantage,” said Kebede. However, education can be a powerful mitigating tool, and can significantly improve their livelihoods.

The report entitled The State of the World’s Girls 2013: In Double Jeopardy: Adolescent Girls and Disasters argues that a combination of political, economic, social and cultural attitudes can lead to discrimination of girls during disasters.

“Three of the four main categories of rights that are most relevant to adolescent girls - rights to protection; development through education; and participation - are also among the lowest priorities and often receive the least funding in the humanitarian community. This is because these rights are not seen as immediately life-saving - like food, water and shelter,” the authors noted.

“In general, when times are tough and there are less household resources for school fees, school uniforms, then there is a son preference. If families have to make a choice, they would rather continue education for boys than girls,” said Plan’s Kebede.

Research conducted by the report’s authors in Zimbabwe, South Sudan and Mozambique indicated that boys are more likely to attend school after a disaster than are girls.

“Girls in the developing world tend to draw the short straw in life. They are intrinsically vulnerable, and face everything from the threat of early marriage and violence to the simple fact that their parents do not think girls important enough to go to school,” said Rose Odhiambo, CEO of the Gender and Equality Commission of Kenya.

According to the International Center for Research on Women (ICRW), one third of girls are married before the age of 18, and one in nine do so before they turn 15, globally.

“Child marriage often increases in emergencies, for a variety of reasons, some of which have to do with income for parents,” said Kebede.

Earlier research shows that fear of gender-based violence and pregnancy out-of-wedlock can motivate families in fragile states to marry-off girls at very young ages as a protective measure.

"Child marriage often increases in emergencies, for a variety of reasons, some of which have to do with income for parents"

Girls under 15 are five times more likely to die in childbirth compared to those that give birth in their twenties, and those married before the age of 18 were also twice as likely to be physically abused or threatened by their spouses when compared to those who married later.

In Mozambique for instance, roughly 60 percent of girls with no education are married by 18, compared with just 10 percent of those who have completed secondary school, according to the ICRW.

Poorly thought-out humanitarian programmes, too, increase the dangers girls face in disaster situations. “We are all aware of the risk of exacerbated gender-based violence based on WASH [water, sanitation and hygiene] programming that doesn’t take into account how latrines and water points are established, for example,” said Kebede.

“Gender-based violence in and around school is a major issue that needs to be addressed and teachers are often exploiting rather than protecting girls, according to various studies,” said Elke Wisch, deputy regional director for the UN Children’s Fund (UNICEF) Eastern and South Africa

In fragile countries like Somalia, lax or non-existent regulatory frameworks coupled with cultural attitudes can increase violence against women and girls.

“The issue in Somalia is that, to many, gender-based violence still only means rape. Denial to education, denial to resources, female-genital mutilation, forced early marriage - none of these are considered gender-based violence,” said Ilwad Elman, programme director at the Elman Peace and Human Rights Centre in Mogadishu.

Somalia is yet to ratify the Convention to Eliminate all forms of Discrimination Against Women (CEDAW). “Innovative strategies to actually support Somalia women and girls are paramount,” Elman added.

Education as the solution

“There is overwhelming evidence that girls’ education is a powerful transformative force for societies and girls themselves,” UNICEF’S Wisch noted. “It is the one consistent positive determinants of practically every desired development outcome, from reductions in mortality to poverty reduction and equitable growth, to enhanced participation and democratization.”

“A girl who has completed her education is less likely to marry and have children whilst she is still a child herself. She is more likely to be literate, healthy and survive into adulthood, as are her children,” said Kebede.

Women walk through the flooded school courtyard-turned relief camp in Fatehpur, Sindh province, for families displaced by the latest monsoon floods that have struck southern Pakistan 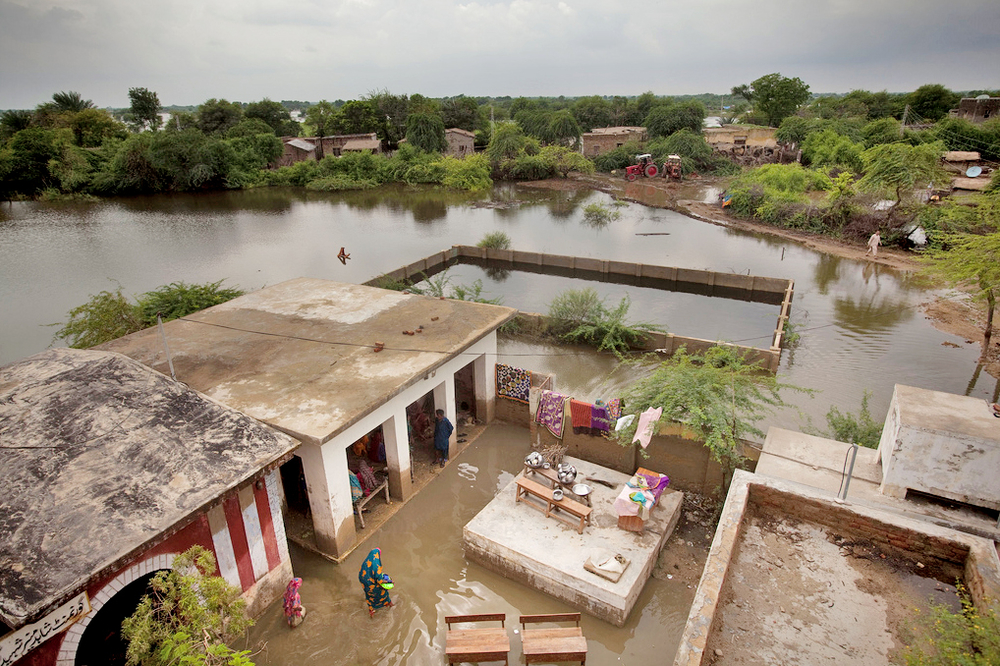 But conflict hinders girls’ access to education. Plan International believes that half of the estimated 57 million primary-school children out of school reside in countries affected by conflict.

“When we include cyclical or protracted disasters this figure is of course even higher,” Kebede said.

Research conducted looking at disasters over a 20-year period in 141 countries shows that boys generally received preferential treatment over girls in rescue efforts.

The use of new technology, as well as innovative partnerships and policies, can help improve access to education, particularly for girls in disasters.

In Bangladesh, solar powered floating schools enable communities affected by seasonal rains and rising sea levels to continue with their education despite flooding.

By prioritizing education during emergency responses, disaster situations provide an opportunity to get more girls into school. “Education in emergencies provide safe spaces for girls and boys, provide psycho-social support and peer support spaces and are often used to communicate life-saving messages throughout the first phases of a disaster,” said Kebede.

The report calls for, among other things, greater gender-disaggregated data to better inform policy, and specific initiatives to address the vulnerabilities exacerbated by gender, especially in disaster prevention and response.