The fortunes of fisherman Melau Feaucre Johanison, 39, were sunk when Cyclone Haruna struck Madagascar earlier this year. He expects to recover financially from its impact only over the next few years - barring any other shocks to his livelihood.

Even before the category two cyclone struck, Johanison, from Sarodrano along the bay of St Augustin, on the nation’s west coast, was struggling to get by.

"At the rate we save money, it will take two to three years before we will be back at the level where we were before the storm"

But when Haruna struck in February, their lives changed overnight. “We managed to re-enforce the house, so it withstood the storm, but I lost all my tools, including the nets and boat,” he said. He has since had to borrow equipment; he pays part of his catch to the lender, while trying to save to buy new equipment.

“It’s very hard, as most of the money we earn goes towards feeding the family. One of my children goes to secondary school in town, but I don’t know how long we will be able to afford this. A new pirogue [a dug-out canoe] costs up to 100,000 ariary ($44), and that is without the sail. At the rate we save money, it will take two to three years before we will be back at the level where we were before the storm,” he said.

Johanison is one of the about 50,000 people adversely affected by Haruna, which brought torrential rains to the west coast for several days before making landfall on 22 February. Flood waters only completely receded in May, finally allowing the last of the displaced families to return home.

Most agencies that had responded to the emergency, including the local branch of international NGO Action Contre la Faim (ACF), the health and water ministry, and international aid agency Médecin Sans Frontières (MSF), have since completed their assistance programmes.

CARE International provided support to almost 11,000 households in the affected region, from immediate post-disaster relief to longer-term recovery initiatives, but will disengage at the end of October owing to the exhaustion of available funding.

A drop-off in funding has been attributed to Haruna’s being classed a modest-sized cyclone and to competition for donor attention currently focused in countries like Mali and Syria.

“When building community preparedness for cyclones, we try to reduce the depth of the income fall and the length of time the people are affected,” John Uniack Davis, CARE country director, told IRIN.

"Every cyclone is different. Some cause more crop losses, some cause wind damage"

“Every cyclone is different. Some cause more crop losses, some cause wind damage to shelter, while others bring flooding,” he said. CARE has provided assistance in the wake of at least six cyclones in the past six years.

Cyclones are a common event for Madagascar, and about 60 percent of the storms that form over the Indian Ocean annually affect the island country. Preparedness can make a substantial difference to the speed of recovery.

CARE has developed an extensive programme for the cyclone season, which generally runs from November through to March, including: damage limitation with strategies such as anchoring roofs with rocks and identifying dry places for food storage; immediate post-cyclone response such as food aid and plastic sheeting; and financial assistance to re-establish livelihoods as quickly as possible.

Its programme, which includes the pre-positioning of relief, usually concentrates on the east coast, however. Storms that affect Madagascar’s west coast, as Haruna did, are seen as an uncommon event.

“We did know for a week beforehand that it would hit, so we managed to get supplies to the other side of the island on time,” Davis said.

While getting emergency supplies to cyclone victims can be a logistical nightmare, rebuilding lives is a complex undertaking.

“In some places on the east coast, people have no resources to bounce back from a cyclone, especially if one hits every year. They just become poorer and poorer. They have to sell their belongings and eventually, they have difficulties [getting] their daily food,” Katia Rakotobe, communications officer at CARE, told IRIN.

CARE's post-cyclone activities target those who are more vulnerable and less resilient, which usually means female-headed households with young children or the elderly.

“Often, the husband will leave for the city to try to find a job there [in the aftermath of a cyclone]. But if the husband leaves, the woman risks losing the land, as this often belongs to the husband’s family. She then has to get by with day jobs,” Rakotobe said.

For months after a cyclone, CARE continues to visit affected villages and offers cash transfers as part of strategy to alleviate disaster impact.

“If you go back months later, it is clear which people have enough resources to get back on their feet and which people don’t,” Davis said. “The advantage of a lapse of time is to see which people in the village are capable of rebuilding on their own. When responding, you want to target those that are most in need. Some people have better coping strategies than others. They have some money, or they have relatives who can help them.” 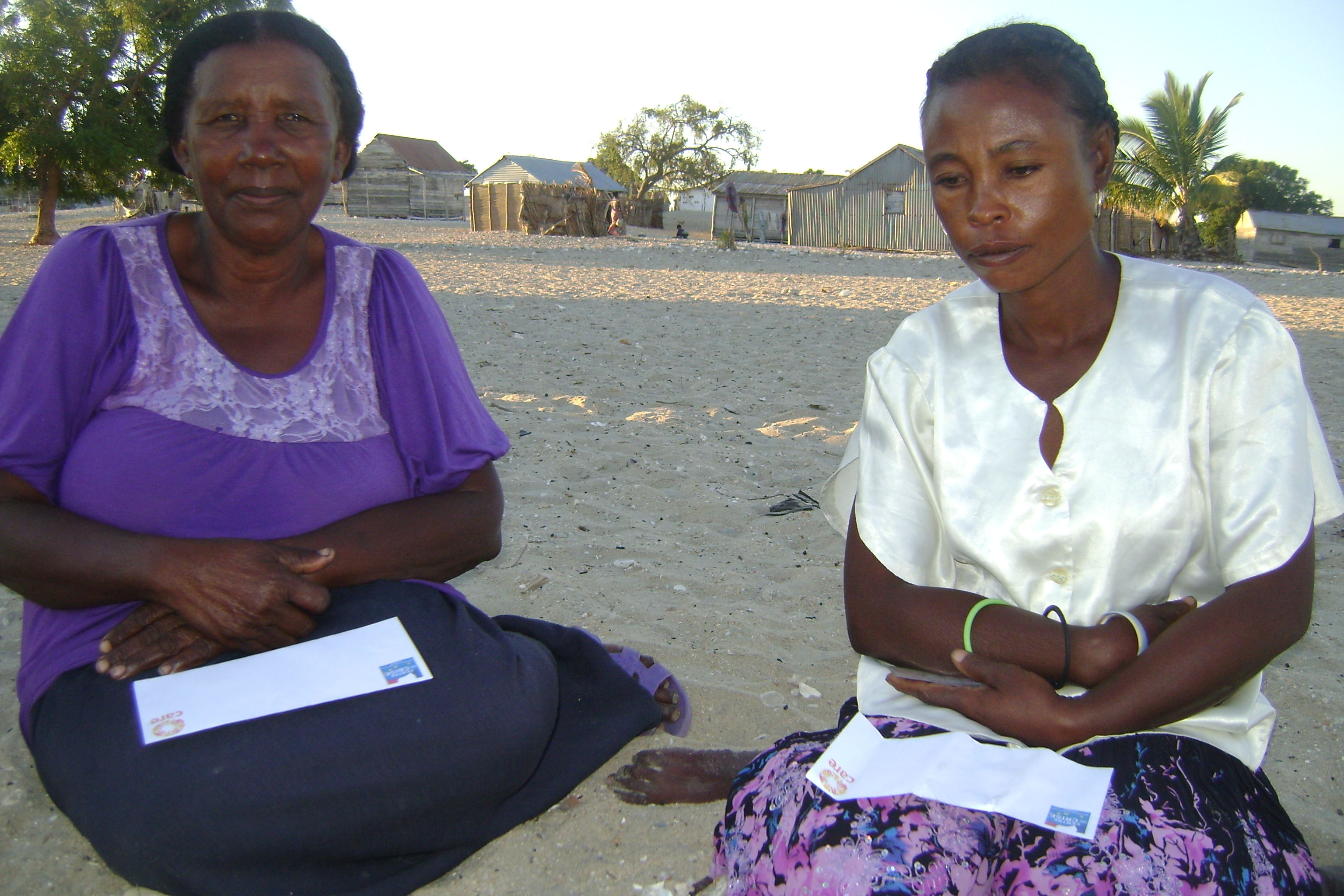 “With cash transfers, people can buy what they feel they need the most. Before, we distributed [mosquito] nets and [food] packages, but different people have different needs, so you shouldn’t be giving the same things,” she said.

“Giving cash promotes dignity of people. We don’t want to presume to know what is best for them, so we give cash when it’s appropriate,” Davis said.

In order to assess what a reasonable sum of money should be, the agency carries out an audit on the costs of tools and equipment people may require.

In the case of those affected by Haruna in Sarodrano, 1,730 people received money for fishing equipment, while in agricultural communities, the agency handed out seeds and set up cash-for-work projects in the months leading up to the harvest.

Two beneficiaries of the cash transfers in Saronadrano are widows Josiany Celestiny, 41, and Vance Leonce, 61. They used to earn a living collecting algae and oysters, but Haruna stripped the oyster beds.

“In the beginning, our relatives gave us some food. After that, we borrowed money from the local grocer to feed the family and pay for the doctor, as the weather made the children sick,” Leonce, a mother of eight, told IRIN.

She has just received CARE’s cash donation of 43,000 ariary ($19), which will go towards rebuilding her house, something she has not been able to afford. “I managed to raise money to repair the roof by myself, but the floor is still broken.”

She is now trying to grow a new batch of Spirulina algae - a nutritional supplement - to sell to a processing plant in Toliara, something she hopes to earn 50,000 ariary ($22) for. She will use the money to repay her the debt she has incurred.

“I can’t say when I will be able to get back to the life I had before,” Leonce said. “There is nothing in the sea anymore. Unless we manage to grow some algae, we won’t get back to last year’s level.”