Read about what we achieved.
MANILA/ZAMBOANGA

The road to recovery for more than 100,000 displaced in Zamboanga will prove a long one, aid workers say, following a recent siege by Muslim rebels of the port city on the southern island of Mindanao.

"Rehabilitation will take a minimum of three months from now - that is the fastest," Philippine National Red Cross secretary general Gwendolyn Pang told IRIN. "But actually, it may reach six months to a year before we are able to fully rehabilitate those places and move them [the inhabitants] back."

"This is the devastating reality for the population of Zamboanga. Apart from losing their homes, many have also lost their livelihoods. They will have to rebuild from scratch, and we [aid agencies] will have to prepare to respond for long-term displacement."

Her comments follow an announcement on 28 September by the Government of the Philippines declaring an end to the security crisis almost three weeks after it began, although sporadic fighting and final clearing operations were still continuing on 1 October.

The two sides are negotiating for the creation of what is envisioned to be an expanded autonomous region for Mindanao's Muslim population that would supersede the one handed to the MNLF, a development that Nur Misuari, its founder, and a number of fighters oppose.

Of the displaced, 102,401 are housed in 38 evacuation centres, many of them schools, while 3,641 remain with families and friends.

Heavy urban combat had brought the city of nearly a million at a standstill over the past few weeks as more than 4,000 troops tried to crush the rebel force, which abducted dozens of people and used them as human shields. Fighting also spread to the nearly island of Basilan, where MNLF sympathizers attacked government forces to divert the attention of the military.

Police officers in Zamboanga City help load thousands of relief packages provided by the U.S. Embassy in response to the immediate needs of citizens displaced by the on-going conflict in the area. More than 100,000 people were displaced after fighting bro 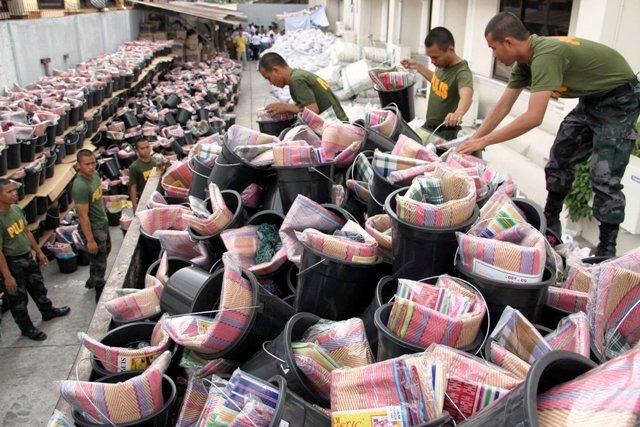 Over 10 percent of the city's population was displaced by the fighting, the Philippines Department of Social Welfare and Development (DSWD) reported, while thousands of livelihoods have been shattered.

An estimated 46,000 people's jobs were lost or disrupted due to the conflict (15,000 workers in the canning industry, 4,800 in the plywood industry, 20,000 fisher folk and 6,000 jobs in the public sector), the UN Office for the Coordination of Humanitarian Affairs (OCHA) reported on 1 October.

Entire sections of the areas seized by the rebels have been razed, with more than 10,000 homes completely destroyed. This was confirmed by satellite imagery prepared at the request of OCHA to map the humanitarian fallout.

At least 140 people, mostly MNLF rebels, are now confirmed dead in the fighting, the Philippine Army reported, with close to 300 wounded and injured.

The damage is currently estimated at US$4.6 million, but privately officials say the real figure is much higher.

In response, deputy presidential spokeswoman Abigail Valte said operations had already shifted to rehabilitation phase, with work now concentrating on how to provide some semblance of normalcy to those who have lost everything.

"The key challenge will be housing," Valte said. "Continuing relief is already programmed, but rebuilding the homes that were totally destroyed could take some time." Philippine President Benigno Aquino had already set aside funds for the building of 10-unit bunkhouses as "transition shelters", she confirmed.

However, according to the International Committee of the Red Cross, the prospects for the displaced was "looking very grim", while the UN has described the situation as a "humanitarian crisis".

Carpenter Santos Pareno, 55, a father of three, will be forced to take his family back to the city of Lamitan, a mixed Muslim-Christian community across the Basilan Strait to Basilan Island, where he still has relatives.
"We left Lamitan a long time ago to live a quiet life in Zamboanga, but the war came looking for us," he said as he and his family huddled under a temporary tent made from discarded tarpaulin at the Jose F Enriquez sports stadium, the biggest of the evacuation centres where, over 70,000 people now live.

"The children will have to go back to school in Lamitan, but our small boat has been destroyed and we don't have any belongings," he said. A distant relative in another part of Zamboanga has agreed to take them in temporarily by mid-October. "Until that happens, we will be living on dole-outs. We want to leave this place, but there is nowhere to go."