As the siege at Westgate, an upmarket shopping mall in the Kenyan capital Nairobi, drags on, Kenyans have been heeding calls from the government and humanitarian agencies to donate blood to help the injured.

At Uhuru Park in central Nairobi - just one of at least four blood donation centres in the capital - queues of people are waiting. “I will wait no matter how long it takes. I came to donate blood and I will not leave before I do so,” said Greg Mbiso, a student at the nearby University of Nairobi.

Eric Misio, a 34-year-old father of two who sought leave from his boss to donate blood said: “When such a thing happens, you can’t leave it to a few people. I am happy to be part of this because I know it is my contribution towards saving a life. If you look at it, we are all humanitarians in one way or the other.”

Jackline Mburu, another of those who turned up to donate blood, said: “For me, this is the best way to show solidarity for those who have been made helpless by the attack. It is sad, but again you feel happy because you have played your part.”

According to KRCS, which is leading the initiative with other government agencies, an estimated 2,977 units of blood had been donated at the four centres.

“The turnout among Kenyans has been huge and we have received thousands [of] people turning up at various centres to donate blood. The response in other areas of need has equally been very good,” Sylvia Khamati from KRCS told IRIN, adding: “Across all the centres in the country set up to provide people with the opportunity to donate blood, the turnout has been massive.”

Abbas Gullet, secretary-general of the KRCS, said the blood donations so far were the highest ever collected in the country.

Khamati added: “Even if we receive more than what is needed for this situation, it can be used for the future.” 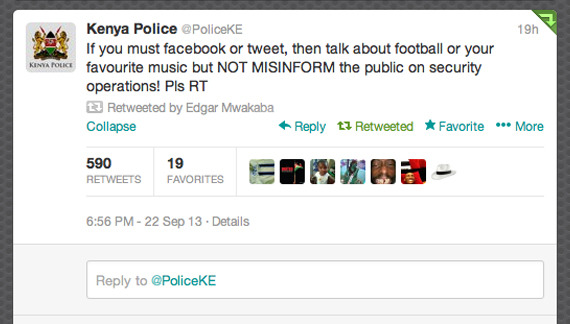 At the Visa Oshwal Centre, not far from where the attack occurred, volunteer counsellors have turned up to offer counselling and psychosocial support to the traumatized; many more have offered to provide food to those rescued from the mall and the security officers keeping vigil.

The Kenya Psychological Association, together with KRCS and Oasis Africa Counselling Center are coordinating counselling services. So far, up to 1,000 people have been tended to.

“Volunteer counsellors are welcome because those we have here are overwhelmed,” a counsellor told IRIN.

Mobile telecoms provider Safaricom has set up a mobile phone-based fund for the victims of the attack through which people can contribute cash donations. The fund is run via M-PESA, an SMS-based platform. Donations from Kenyans to the account have so far reached an estimated 34 million Kenya shillings (US$389,000).

According to the Interior Ministry, at least 62 people have been killed, 175 injured and more than 1,000 rescued from Westgate Mall. KRCS however put the toll at 69. The Somali militant group Al Shabab has claimed responsibility for the attack.

Khamati told IRIN health facilities where the casualties have been admitted are overstretched.

“We are collecting essential medical supplies to be able to assist those facilities where the casualties are admitted. We are also ready to provide additional health personnel on a needs basis. At least the Kenyatta National Hospital and MP Shah [hospital] have indicated to us that they need help,” she said.

Evans Kidero, the governor of Nairobi County, told IRIN after donating blood: “As Kenyans, the unfortunate events of the past two days have brought out our unrelenting spirit. We have stood out in solidarity to help those who need our help.”