Cooperation between ex-rebel fighters and government authorities in demining parts of northern Niger should inspire government and non-state actors in Mali to embark on a joint demining project when they are ready, say ex-rebels and soldiers in Niger.

"Mali should be guided by the example of Niger, with the State and the ex-combatants going hand in hand," Ahmad Ouaghaya, former commander for the Tuareg-dominated militant group Niger Movement for Justice (MNJ), told IRIN.

Mines and explosive remnants of war have severely affected populations of northern Niger's Agadez region, which was mined during the 2007-2009 conflict between Niger armed forces and MNJ. Some 350 people have been injured or killed by landmines in Niger since 1999 according to the authorities.

Tuareg groups staged uprisings in Agadez in the 1990s and from 2007 to 2009. The 2007-2009 conflict was characterized by attacks on Nigerien military and foreign economic interests, as well as kidnappings of civilians and Nigerien soldiers.

The government signed peace accords with the MNJ in 1995 and reached a cease-fire agreement in 2009. The National Commission for the Collection and Control of Illicit Weapons (CNCCAI) subsequently adopted several recommendations to rid the Agadez region of mines and unexploded ordnance.

Since demining operations began in 2010, 744km of major roads in Agadez, around the Aïr Mountains, were demined. A further 1.2 million square metres were demined along secondary roads. This has left most of the roads and population centres in the region mine-free, according to Alassane Housseini, official at CNCCAI, who noted the exact extent of the mined area is unknown. Approximately 1.2 million square metres are still to be demined.

While the operations began as a government-led effort, MNJ commanders asserted it would not work without their cooperation, given they knew where many of the mines were laid.

The Swiss-based humanitarian organization Geneva Call, whose goal is to rally non-state armed actors to comply with international humanitarian standards, had been working with the MNJ combatants and the authorities on mine action since 2008, when the conflict was still active.

In October 2011, it organized the first ever workshop on cooperation in mine action, bringing together state representatives and ex-rebels in Agadez. Discussions centred on how to improve information sharing and demining activities between the two groups. The main recommendations were to recruit ex-MNJ members to participate in demining and to create a commission within the CNCCAI to coordinate information on suspected mined areas.

Geneva Call cites several reasons for the success of the collaboration.

A cease-fire had already been signed, and the ex-rebel combatants and authorities were willing to cooperate. The authorities, as well as donors like the UN Development Programme and the European Union (EU), supported the initiative.

"The CNCCAI and authorities always supported Geneva Call's work in getting the ex-rebel combatants to contribute information in order to facilitate mine action," said Geneva Call president Elisabeth Decrey Warner. "The ex-rebel combatants, on their side, acknowledged the harsh impact landmines and the conflict had left on their communities and recognized the usefulness of more enhanced cooperation with the authorities."

Additionally, neighbouring Chad, where government authorities and ex-rebel combatants from the Northern Tibesti region had previously cooperated on mine action, offered Niger an example of fruitful collaboration, despite other difficulties demining teams faced there.

Further, incentives such as training and micro-loans for ex-fighters who gave up their weapons, and a decent wage - US$200-300 for those who participated in mine activities, whether intelligence or demining - motivated participation. Indeed, several of the ex-combatants who did not receive micro-loans refused to surrender their weapons, said the CNCCAI's Housseini.

An October 2011 workshop organized by Geneva Call - the first ever workshop on cooperation in mine action, bringing together state representatives and ex-rebels in Agadez 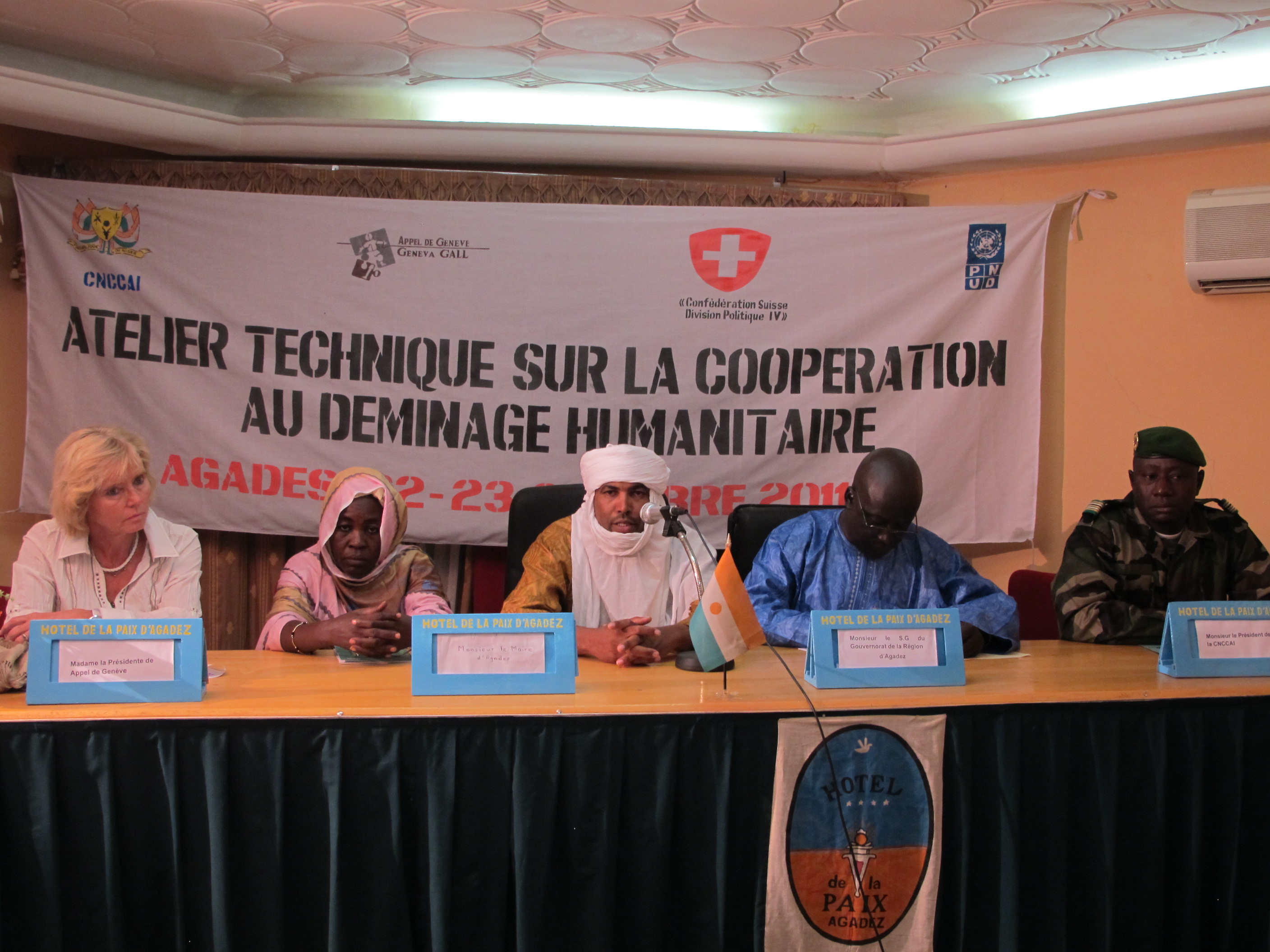 Once cooperation was established, both teams, made up of CNCCAI members, community volunteers and ex-MNJ members, worked together to define priority areas, identify the extent of the contamination, map civilian mobility and draw up a plan for a clearance zone. The involvement of  ex-rebel combatants was "fundamental" said Warner, as they knew the terrain best.

Mali must be ready

Mali should take lessons from this experience, Housseini said, noting now is the right time to set up a national body to lead on demining and to ensure that membership is inclusive.

If ex-rebels are not part of the clearance process in Mali, it will fail, said former MNJ military chief Mohamed Ajidar.

Landmines relating to the recent conflict in Mali have reportedly killed 80 people, half of them children, according to the UN Mine Action Service (UNMAS), which notes the real figure is probably much higher.

UNMAS is helping the military clear land affected by landmines, explosive remnants of war and improvised explosive devices in parts of central and northern Mali. Mine action and demobilization activities also come under the UN stabilization mission's (MINUSMA) mandate, though these are not yet clearly defined.

But the Malian army needs first to be strengthened so it can play a proactive role in the process, say experts. In April 2013, the EU started training four battalions of Mali's army, which had been severely weakened following years of neglect. Mali is not quite ready to take on fully-fledged demining activities, ex-MNJ commander Ouaghaya told IRIN: "We first need ex-combatants and policymakers in Mali meet to discuss demining in Mali frankly and without anger."

Post-conflict tensions currently run too high, agreed Housseini. Once post-election development initiatives gain traction, and legitimate local leaders are in place in the north, these discussions can begin, he said.