When an organization has thousands of staff based in offices all over the world, sharing new ideas - let alone implementing them - is no small task.

The UN Refugee Agency (UNHCR) - an organization with nearly 8,000 staff members working in 126 countries - needs to constantly innovate to respond to new and ongoing refugee crises around the world, but the extensive knowledge of its field-based staff members often goes untapped.

In August, the agency launched UNHCR Ideas, an initiative that uses crowd-sourcing technology to connect employees, partners and beneficiaries using a platform that allows them to share and discuss ideas for tackling some of the organization’s most pressing problems.

Rocco Nuri, communications officer with UNHCR Innovation, a recently launched unit within the agency, told IRIN that the crowd-sourcing tool, developed by California-based software developer Spigit, “allows us to take a bottom-up approach to identifying, validating and implementing refugee-centred solutions”.

The initial step involves issuing a “challenge” to participants, who include UNHCR staff, partners, refugee experts and a handful of refugees – an issue of concern for some rights advocates. The participants submit ideas, which can be viewed, commented on and voted for by other participants.

After four weeks, the top 20 ideas are evaluated by a panel of experts, who provide feedback on how participants might tweak or strengthen their proposals. A final review stage will then select the best idea for research or piloting by UNHCR Innovation.

The first challenge to be debated on the new crowd-sourcing platform is how to improve access to information and services for refugees living in urban areas. Connecting and communicating with urban refugees presents a major challenge, said Nuri, “not only because they are scattered across sprawling cities, but also because poverty and unstable tenancy arrangements force them to move frequently.”

Three weeks into the process, over 100 ideas have been submitted and voted on. The most popular so far include: the development of a comic-book series aimed at young refugees that could tackle issues such as child abuse; country-focused online portals aimed at providing essential information to refugees; and the use of university students to deliver legal aid services.

“There’s definitely trends,” observed Anahi Ayala Iacucci, a senior innovation advisor with international non-profit media organization Internews, who is one of 10 experts reviewing the ideas. “There are a lot of ideas focusing on providing information through web sites or mobile technology. But there are also some ideas that are very out-of-the-box.”

Internews is another large organization that has made use of crowd-sourcing to solicit ideas from its employees for projects it can pilot.

"It allows people to interact with each other, to have a conversation; it's not just like sending an email"

“We did it because when you have a large organization and a lot of people working in different contexts and sometimes very focused on their daily jobs, you don’t have time to connect with people working for the same organization,” said Iacucci. “It allows people to interact with each other, to have a conversation; it’s not just like sending out an email.”

Crowd-sourcing is being used in other humanitarian contexts, and within other UN agencies, including the UN Office for the Coordination of Humanitarian Affairs (OCHA), to map and respond to emergencies, but there are concerns about the volume and integrity of information generated in this way.

“Crowd-sourcing for ideas rather than as part of a response to an emergency is probably considered less risky and a good place to start,” said Iacucci, who, in addition to her role at Internews, is co-founder of the Standby Task Force, which makes use of digital volunteers to do crisis mapping.

She added that customized platforms such as the one UNHCR was using were not always necessary, depending on the scale and complexity of the project. “We’ve used a free blogging site; it’s much less fancy but it has exactly the same functionality. In terms of crowd-sourcing, there are lots of options.”

The issue of how to reach out to and assist urban refugees, who now make up 58 percent of refugees worldwide, had been the subject of much debate both within and outside of UNHCR for some time before the launch of UNHCR Ideas. 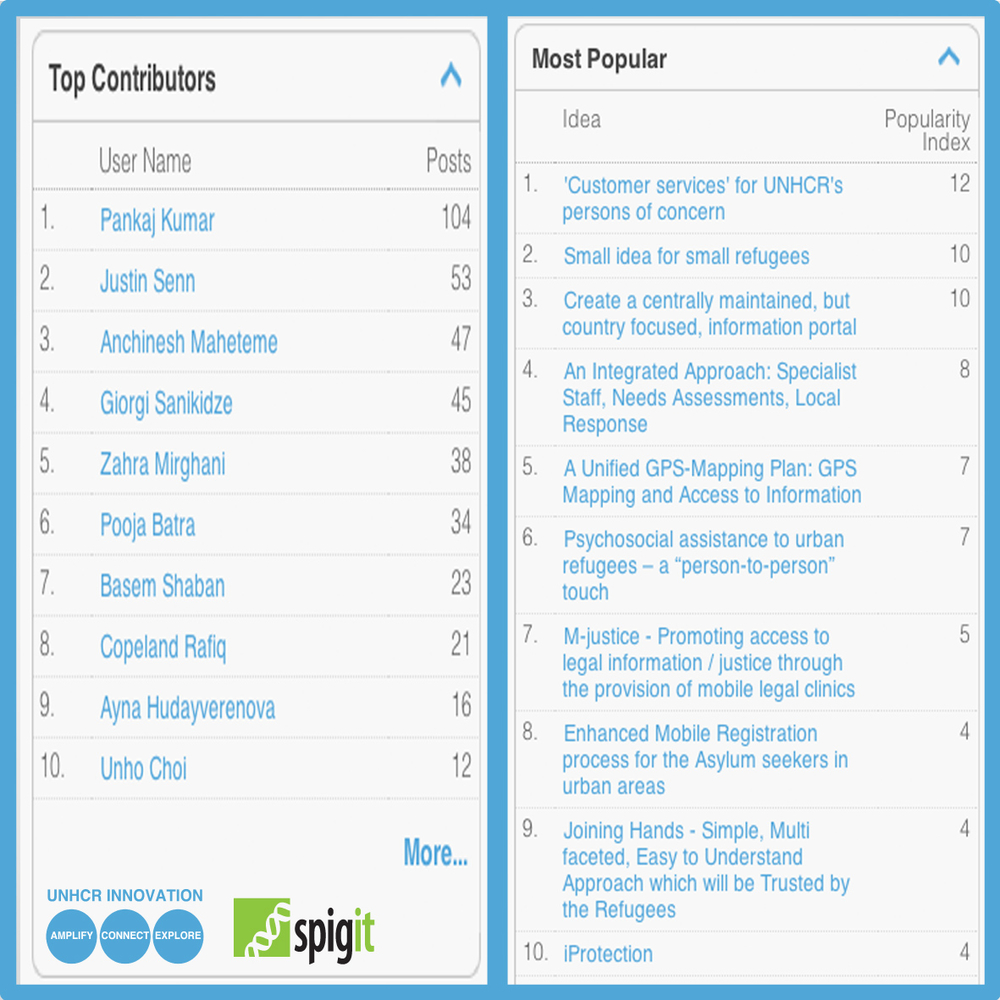 The adoption of a new urban refugee policy by UNHCR in 2009 was widely welcomed as a move away from a bias towards assisting primarily camp-based refugees. However, in recent months, a number of commentators have used an online forum, launched by the NGO Urban Refugees earlier this year, to express disappointment about the degree to which the policy has been implemented.

One of the biggest disappointments, according to Tim Morris, an expert on refugee affairs who co-authored one of the posts on Urban Refugees, has been “the lack of the voice of refugees in urban environments”.

“There was much talk of enabling this when the new policy was launched, but hardly anything seems to have happened. It seems to me this is a huge gap,” he wrote in an email to IRIN in July.

Of the 300 people participating in the current UNHCR Ideas challenge, only 10 are refugees. Nuri explained that the number of users, both staff and refugees, would increase for future challenges, after the new platform had been thoroughly tested and evaluated.

“I am happy to see UNHCR getting involved in innovation and trying to use new tools to find solutions,” commented Sonia Ben Ali, founder and chairperson of Urban Refugees. “Intervention in urban contexts requires creative thinking, and this is an interesting attempt to do so.

“As a complement to that, in-depth discussions also need to happen within UNHCR (at the field and HQ levels) and between UNHCR and other stakeholders on certain issues requiring more than just technical innovations to be solved.”