Read about what we achieved.
GOMA

As construction workers put the final touches on a five-story apartment-hotel complex in the eastern Democratic Republic of Congo (DRC) city of Goma, foreman Lucien told IRIN its future occupants would likely not be locals.

“Here in Goma, hotels are in very high demand because many aid workers come because of the violence here. They have nowhere to stay when they arrive because hotels are always normally fully booked,” he said.

This expatriate demographic has shaped more than Goma’s skyline: few cities in the world have had their economies affected quite as extensively - and, some argue, with such mixed blessings - by the international humanitarian industry as the capital of North Kivu province.

“Goma’s business people rent out transportation and housing services to NGOs. These NGOs hire labour force and provide for part of their procurement locally. This represents an important turnover, which translates into more businesses, including new buildings, hotels, cars, etc.,” Fidel Bafilemba, a researcher with the Enough Project, told IRIN.

Oscar Kambale, 34, who runs a fleet of vehicles that he leases out both to NGO workers and other foreign visitors, told IRIN his business is booming.

“There is no day passing by without me getting a phone call about somebody looking for a car to hire. They will tell you they want to visit the many internally displaced persons’ camps around Goma. For a whole day, I will charge between US$100 and $120. It a brisk business for me,” he said.

“At times I have to borrow cars from my friends to bridge the deficit when mine are all leased out,” he added.

On any given evening, the car parks of some of Goma’s most popular nightclubs are largely occupied by 4X4 vehicles bearing either registration plates of the UN or the insignia of aid organizations.

“We have to keep this place clean, and we have priced our beers high because we are mostly targeting foreigners who are working for non-governmental organizations,” Fabrice, a doorman at Chez Ntemba, told IRIN.

Waves of conflict over the past two decades (see box) have led to the presence of some 500 aid agencies in North Kivu. Around 100 of them are international; the rest depend largely on foreign funding. In 2012, the UN and its partners appealed for $718 million to meet humanitarian needs in DRC, much of it for programmes in the east.

"In a particular context of a weak institutional framework, informal urbanization and a highly contested economic, social and political urban arena, the international humanitarian presence has become a significant factor in reinforcing patterns of conflict and competition across the urban political and socioeconomic space"

The growth of the humanitarian presence in Goma has led to a high demand for housing, shopping malls, private car hire and other amenities.

“Some of the changes that occurred in Goma are a result of sheer urbanization, but much of it [is] due to an influx of humanitarian agencies. These have created jobs both for locals in Goma and Congolese from other regions,” Tariq Roland Riebl, Oxfam’s humanitarian programme coordinator in DRC, told IRIN.

“Aid agencies’ staff have created an emerging middle class in Goma who are able to spend and drive the economy. Their presence also means there is an increased need for services,” Patrick Lavand'Homme, head of coordination at the UN Office for the Coordination of Humanitarian Affairs Eastern Africa (OCHA), said.

“But it is also important to recognize the fact that even Congolese businessmen and the mining activities in the eastern part of the country also contribute a substantial amount of money that circulates within the economy of Goma,” he added.

According to Karen Büscher and Koen Vlassenroot of Ghent University’s Conflict Research Group, “Goma’s new economies and industries, driven by the humanitarian sector, have literally shaped the city’s economic and social layout.”

In a March 2013 article published on opendemocracy.net, they said that in addition to  “creating a strong stimulus in the local urban economy… the concentration of international humanitarian organizations and their expatriate staff has also resulted in additional conflicts and contrasts.

“In a particular context of a weak institutional framework, informal urbanization and a highly contested economic, social and political urban arena, the international humanitarian presence has become a significant factor in reinforcing patterns of conflict and competition across the urban political and socioeconomic space,” they wrote.

“The inflation of rents, increasing prices of houses and land, and the profound dollarization of local markets in these central districts further sharpened the socio-geographic urban fault lines,” they added.

It is a sentiment echoed by one Congolese employee of a major NGO, who asked to be identified only as Mubenga.

“The real beneficiaries of economic prosperity brought about by aid organizations are the same people who have benefited from the extraction of minerals. They are the people with access to aid executives and can build hotels and expensive restaurants,” he told IRIN.

Or, as Oxfam’s Reible put it, while aid workers “are paid well and can pay high rents, the poor are affected because they don’t have the money to cope with an increasing cost of life.”

“Housing has become very expensive because NGO staff pay high rents for decent housing, and the landlords know this. Some have removed people from their houses because they want to refurbish them to give out to those who can pay good money,” Jeanne, a local resident, told IRIN.

While roads in the central business district and the gentrified east of the city tend to be paved and well-lighted, this is not the case in most outlying areas of Goma, where most buildings are shanties.

A market street in Goma, the capital of the Congolese eastern province of North Kivu 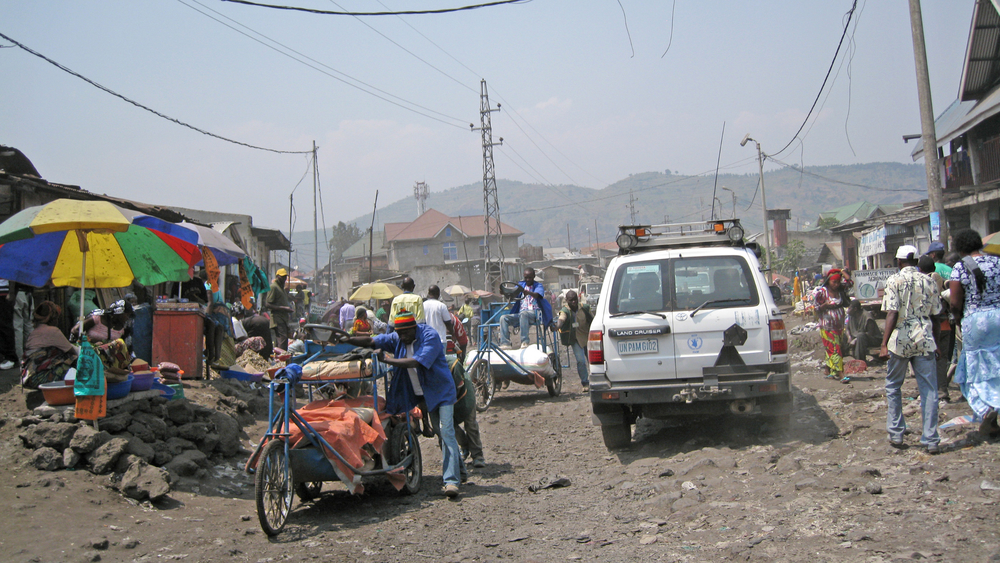 On the upside, countered Reibl, “there is also the knock-on effect: these skilled people need the services of cleaners and nannies, which could benefit those with low skills. And the supermarkets and malls that come up provide employment as well”.

The double-edged sword of the aid workers’ presence also extends to the sphere of social services: in the relative absence of the state, it is UN agencies and NGOs that provide or at least support much of the region’s education, health, water and sanitation services.

According to Büscher and Vlassenroot , “Due to a lack of means, capacity, motivation, vision, corruption and mismanagement, state services have been constantly hollowed out and have increasingly been replaced by new coalitions of local and international development actors.”

They added, “Today, international aid agencies have not only replaced the state in several key sectors, but also development is understood locally as a responsibility of the humanitarian sector.”

Marc-Andre Lagrange, Central Africa Senior Analyst at the International Crisis Group, explained that the “DRC national government is fully engaged in a governance by substitution policy, something that is not new as it was the [1965-1997] Mobutu regime that introduced that practice of weakening the state apparatus and handing over social services to humanitarian and charitable organizations”.

He added, “Education and health care have since long been taken over by the Catholic Church in most of the country. Organizations such as MSF were present in DRC long before 1994.”

There is a general consensus that this trend urgently needs to be reversed. One of the pillars of Peace Security and Cooperation Framework for DRC, signed in February by a host of African leaders and UN Secretary-General Ban Ki-Moon, is a commitment “to consolidate state authority” and to “further economic development, including with respect to the expansion of infrastructure and basic social service delivery.”

The Ghent University academics warned in their article of the potential “disastrous long-term impacts” of the reduction of state sovereignty in eastern DRC.

“Humanitarian organizations’ dominant role in local urban governance processes has significantly reduced the bargaining position of the new state administrations, which today have no capacity at all to attach conditions to international agencies’ interventions and are continuously forced into a position of negotiation,” they wrote.

“The biggest question is: what happens to the economy when those international organizations and UN agencies finally pull out or scale down their presence in Goma?” Lagrange told IRIN.

“The absence of [an] exit strategy is disastrous given the lack of capacity both within the national and provincial authorities to provide services and protection to civilians.”