If the Democratic Republic of Congo’s (DRC) North Kivu capital of Goma were a hotel, there would be a sign hanging on the door with the words “sorry - no vacancies.”

From the 1994 exodus from neighbouring Rwanda, in the wake of the genocide, to interstate wars and decades of insecurity caused by a multitude of armed groups, the city has become the end of the line for those fleeing the country’s conflicts.

The latest influx of internally displaced people (IDPs), fleeing conflict with the allegedly Rwandan-backed armed group M23, is pushing the city to its breaking point.

In response to continued displacements from across North Kivu, about 30 temporary “spontaneous sites” have been established in the province, using venues ranging from churches and schools to marginal land.

NGOs are providing basic services, such as water and sanitation and primary healthcare, to the burgeoning IDP population. IDPs are also staying with host families in the city.

According to the UN Stabilization Mission in DRC (MONUSCO), “Over one million civilians live in the relatively small area of Goma and Sake and along the road that connects them, where amongst others the Mugunga IDP camps, temporary home to 70,000 people displaced by the conflict, are situated.”

Of the more than two million IDPs in the country, about one million are displaced from South and North Kivu provinces. Spontaneous sites have been established in the North Kivu towns of Goma, Masisi, Rutshuru and Walikale. And the robust mandate afforded to a UN intervention force meant to “neutralize” the more than 30 armed groups in the Kivu provinces is expected to see even more displacements.

IOM, other humanitarian actors and local authorities are currently identifying any available land to accommodate new influxes of IDPs, while at the same time preparing for the eventual return of the displaced should there be an improvement in the region’s security conditions.

Although the displaced plight is high on the agenda of donors, IDPs in spontaneous sites - due to their sheer number and extreme need - often have access to only “minimum assistance,” Camain said.

IOM estimates the population of IDPs living in spontaneous sites in North Kivu is about 231,000 people. One such site is Bulengo, on the outskirts of Goma, where about 58,000 people live. 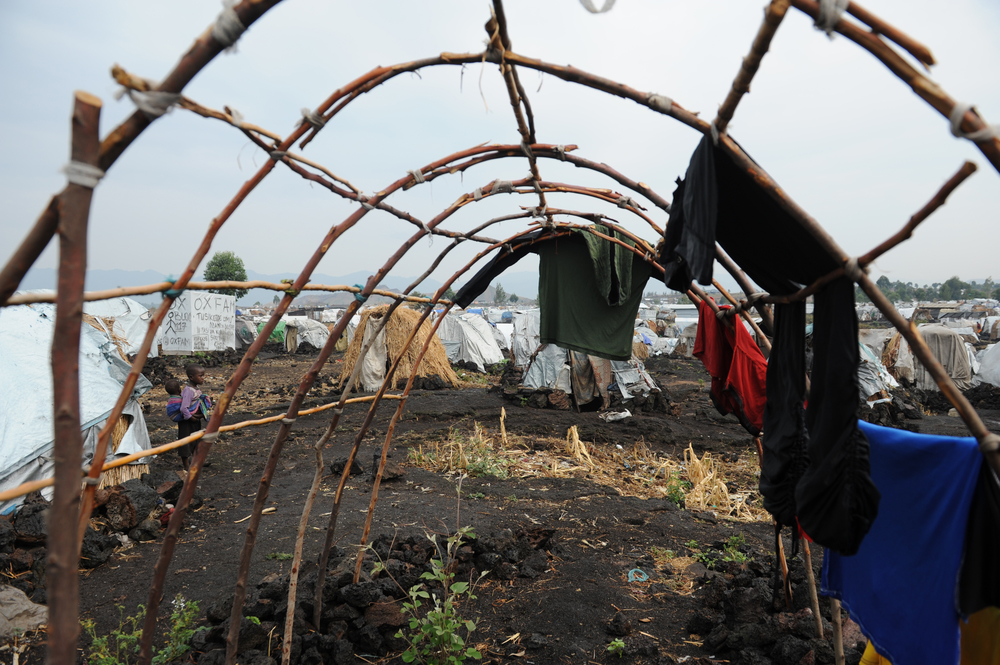 Aziza Kasidika, 19 and three months pregnant, fled there from North Kivu’s Masisi during fighting between DRC’s national army (FARDC) and armed groups in January 2013. She has since lost contact with her family.

Her home is a crudely constructed “bâche”, about 2m long and just more than half as high. Branches provide a framework for thatch, with a patchwork of plastic bags to try to keep the weather out. A piece of cloth is used for a door, and the bed is a thin mattress of grass on top of volcanic rock.

“I sleep very bad because I sleep on the rock. The bad shelter is a problem, and it’s very difficult to live. I get sick,” she told IRIN. “There should be food distribution twice a month, but it’s only usually once a month. I get rice, maize, beans and oil, and there is never enough salt.”

The absence of adequate shelter is a common complaint in Bulengo, as are the security risks associated with foraging for fuel - needed for both cooking and warmth - beyond the site’s perimeter.

“I don’t know how long I will be here. It’s difficult to see the future. Our only future is the next food hand-out… I will return to Masisi when there is peace - but not that regular peace of two weeks and then war again. I live in Bulengo, and I will stay in Bulengo,” Kasidika said.

Maria Sankia, 60, fled to Bulengo from Walikale in November 2012, after fighting between the armed groups the Democratic Forces for the Liberation of Rwanda (FDLR) and Raïa Mutomboki - Swahili for “angry citizens”. She came with two of her neighbour’s young children, and cites the same concerns as Kasidika: food distribution, security and poor shelter.

“Children don’t have schooling. There are no toys; there is nothing for the children to do. So many children go to the lake, but they don’t know how to swim. Five or six children have drowned [in Lake Kivu] that I know about since I came here,” she told IRIN.

"This is maybe the fourth time I have run away. But this time was definitely the worst"

Goma-based Christian Reynders, of Médecins Sans Frontières (MSF), which has established primary healthcare clinics at spontaneous sites, told IRIN that the medical caseload included diarrhoea and malnutrition, but that the predominant issue was respiratory tract infections, a direct consequence of the IDPs’ inadequate shelter.

At MSF’s Majengo clinic, situated in a Goma school where IDPs have taken refuge, Barikurie Kosi, 35, told IRIN, “This is maybe the fourth time I have run away [from Kibati, after M23 entered her village]. But this time was definitely the worst. There was no chance to take anything.”

She fled her home in May and arrived in Goma after a six day walk. She managed to bring her youngest three children, aged two, three and six, but her three teenage children, 13, 15 and 17, “ran in other directions. I don’t know where they are.”