Despite the victory of Ibrahim Boubacar Keita in Mali's peaceful presidential elections at the weekend, sporadic violence continues in the north, where for months herders have been cut off from accessing traditional routes in search of pasture for fear of attacks by bandits and rebels.

Many are also too scared to enter towns which have seen clashes between locals and displaced people who have settled in their outskirts; or they fear rebels might steal their cattle and sheep on market days if they do enter town.

The rebels include National Movement for the Liberation of Azawad (MNLA) members, mainly in Kidal, but also in some villages north of Menaka in Gao Region. Elsewhere, locals joined one of several Islamist groups or the separatist Tuareg rebels.

"Some Islamists stayed behind in villages and rural areas following the French-led military intervention, hiding in and among the local populations when they were driven out of major towns," said Capt Traoré with the Malian army in Bamako.

Keita will have his work cut out to end the insurgency and bring lasting peace to the north.

Herders in Forgho, 25km north of Gao city, and Bourem in Gao Region on the road to Kidal, told IRIN they had been attacked when they left the market on their way back into the desert with their animals. "They [the rebels] would threaten herders in the bush and stop stockbreeders on their way to the market and steal their cattle," said Aklini Moliomone, a Songhai pastoralist from Forgho.

Robberies along the road from Gao to Tessalit in Kidal Region have also risen, according to French army communications officer Cyrille Zimmer.

Violence has also broken out between herders in Mali and displaced people or refugees returning from Niger, Burkina Faso and Mauritania, all of whom are also vying for access to scarce grazing land, according to Malian NGO Tassaght, based in Gao.

Northern Malian refugees have started to return to Mali from Mbera camp in Mauritania, travelling via Niafunké in Timbuktu Region, to Timbuktu town. 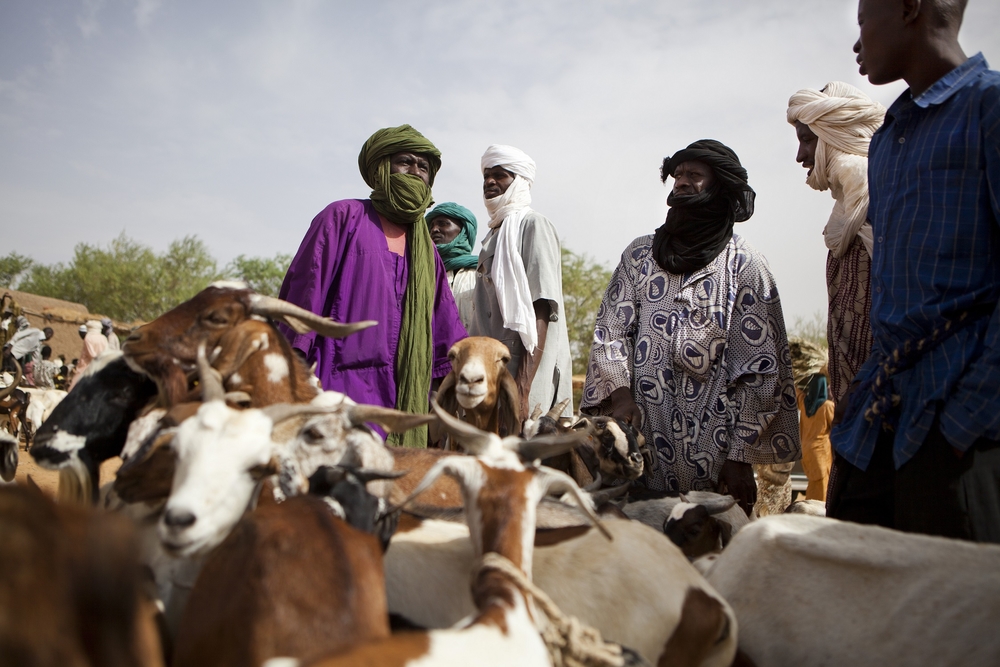 "The pastoralists from Burkina Faso who used to cross the border into Mali with their animals were not ready to share the limited resources with the displaced," explained Wanalher Ag Alwaly with Tassaght in Gao.

Last year's rains meant good pasture throughout much of the north, but many of these herders said they were unable to fully take advantage of it. This year rains arrived late in most of the north - coming two weeks ago - and have so far been weak, thus pasture is minimal, say pastoralists.

"There is almost no grass and no water, because there are so many herders in this area and only limited grazing land. We have to walk far to find food for our animals," said Moliomone.

On market day in Forgho, where thousands of herders congregate, 60-year-old herder Moussa Ag Bilal hoped to get a good price for his animals - mostly goats, plus one cow that is so thin that it has stopped producing milk. When a potential buyer approached to inspect the animals, Ag Bilal gently turned it to hide its sticking-out ribs. Afraid of rebels, he told IRIN he is too scared to move his animals to the grazing areas north of Gao.

According to MINUSMA, in some areas of the region around Menaka, MNLA are still in control, while suspected members of Ansar Dine and the Movement for Unity and Jihad in West Africa (MUJAO) have been spotted in parts of Kidal Region. The road from Gao to Kidal - especially north of Tessalit - has seen an increase in bandit attacks; improvised explosive devices are occasionally used. "Last week a food truck was stopped and the cargo was taken away by rebels," said MINUSMA spokesperson Michel Bonnardeux in the capital Bamako.

Undetonated explosives and arms left behind by the armed groups, and hidden in the terrain, pose another threat to herders and their animals.

Goats are lifted on a truck going to Gao where herders hope to fetch a higher price for their animals. July 2013 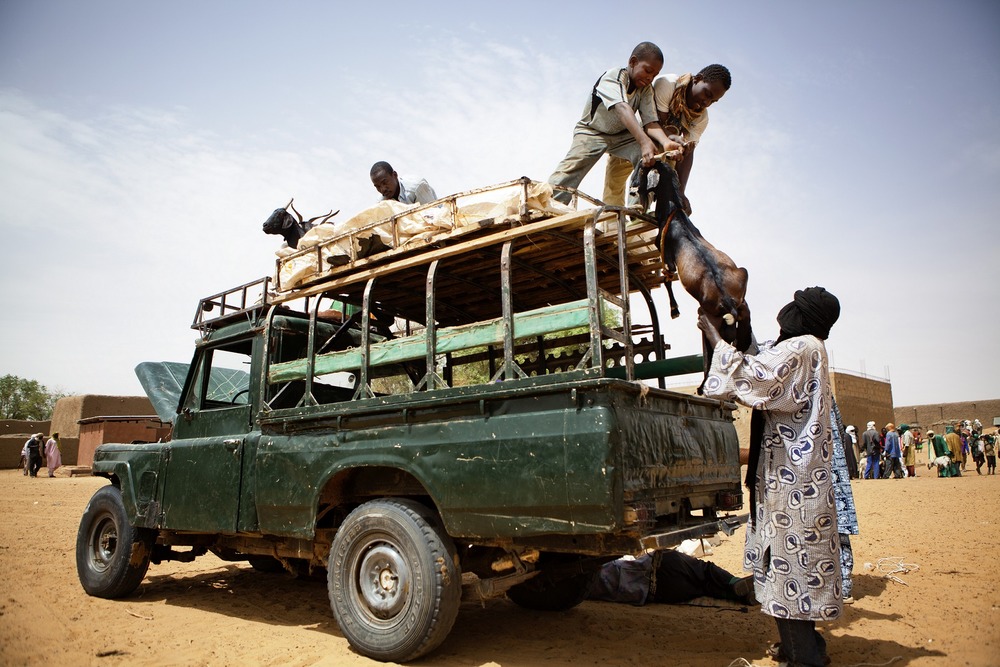 The tensions just reinforce pastoralists' plight - many had most of their herd of confiscated by rebels or Islamists, or have had to eat their animals to survive, given the high prices and low availability of food across most of the north since the Islamist occupation. "Many [herders] fled without their animals. Others lost their herds when the rebels attacked their villages. They returned with nothing having lost their only source of income", said Tassaght's Ag Alwaly.

"The months of May, June and July are always hard for Mali's herders," he continued.

"The cattle are starving. This year the Islamist occupation, the following conflict and continued rebel attacks made life extra difficult," Ahmed Ag Algarbi, a Tuareg pastoralist from Teshak, a Tuareg village in Timbuktu Region, told IRIN: "For two years we have had nothing to eat. We were forced to kill our goats to feed our families. Life in the desert is hard. Before, we at least had our animals, now we have nothing."

Most of the animals IRIN came across were frail and very weak, even more so than the same time last year, according to the International Committee of the Red Cross (ICRC).

Since January ICRC and the Malian Red Cross distributed roughly 400 tons of animal feed hoping to reach 30,000 herders during the lean season. Tassaght buys meat at above-market value to distribute among families in Gao and nearby villages to boost both livelihoods and food security. According to Gao-based herder Atarouna Abdoulaye, prices for goats and sheep went from US$30 to $6-8 in some markets.

The Red Cross also vaccinated two million cattle, sheep, goats, camels and donkeys to help restore their health as the rains approached. Often thin and weakened animals succumb to illness or drowning when the rains arrive, according to Agronomes et Vétérinaires Sans Frontières in Bamako. But between January and July insecurity hampered the ability of NGOs and ICRC to distribute food, seeds, fertilizers and tools in some areas, according to Jean Cimangay, ICRC's project officer.

Tassaght plans to give returning herders small stocks of around 10 animals each, to help them build anew. "Some pastoralists had herds with over 100 animals. Ten goats is not much but at least it's a start," said Ag Alwaly.