Planners in Sri Lanka should do more to mitigate the effects of extreme weather in order to help those most likely to be affected, experts say.

According to Sri Lanka’s Disaster Management Centre (DMC), in 2012, 1.2 million people were affected by drought and over half a million by floods, while in early 2011, floods affected over a million and displaced more than 200,000 - a trend expected to increase in the future.

“There is nothing to indicate that this trend will slow down. All the signs are that it will increase,” Bob McKerrow, head of delegation for the International Federation of Red Cross and Red Crescent Societies (IFRC) in Sri Lanka, told IRIN.

In 2012, the island nation experienced two dramatic back-to-back weather events. Between January and October, the island’s Northern, Eastern, Southern and North Western regions suffered a severe drought. A mid-year forecast by the Socioeconomic and Planning Centre of the Department of Agriculture released in August 2012, when the drought was at its worst, warned of a loss of around 23 percent of the seasonal paddy harvest due by September.

The drought was only broken by the onset of heavy rains in the first week of November, made worse by Cyclone Nilam which struck Sri Lanka and southern India on 1 November, killing 45 people, temporarily displacing 80,000 and resulting in damage to over 10,000 houses, DMC reported.

According to an assessment by the ministries of economic development and disaster management, and the World Food Programme (WFP) in January, around 20 percent of the island’s main paddy harvest of around 2.6 million tons was lost to the floods. Of the 550,000 people affected by the floods, some 172,000 - 31 percent of surveyed flood-affected households - were severely food insecure, while 44 percent were borderline food insecure, the report said.

More than 20,000 people were affected across Sri Lanka by heavy rain and flooding on 17 December 2012 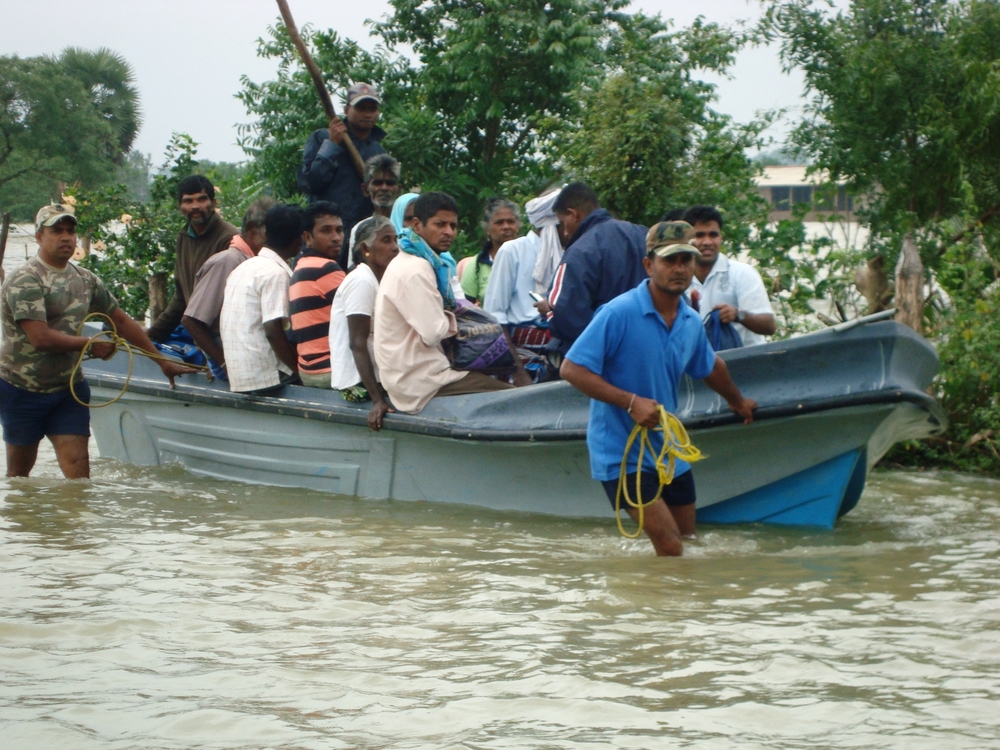 Sixty-seven percent of the surveyed flood-affected people had also been affected by the drought, the report noted.

At the same time, Sri Lankan officials report that with extreme weather events increasing in frequency, people are increasingly migrating to cities in the hope of securing a stable income.

“We have seen that when the harvests fail, the migration to nearby cities increases with people looking for temporary income,” Sarath Lal Kumara, DMC deputy director explained.

Regional experts say the situation in Sri Lanka is not dissimilar to what is happening elsewhere in the region.

“If one asks, ‘is displacement by weather-related events a serious issue in South Asia?’, then the answer is `yes’,” Bart W. Édes, director of the poverty reduction, gender and social development division at the Asian Development Bank (ADB), told IRIN, noting the risk of increased migration.

“Combined with large and growing populations living in vulnerable areas - and a forecasted increase in extreme weather events - South Asia is likely to confront continued environmentally driven displacement and migration,” he said.

IFRC’s McKerrow said humanitarian agencies should look at increasing community resilience against natural disasters as a core requirement when carrying out projects in vulnerable areas.

The SLRC is currently building around 20,000 new houses in Sri Lanka’s former northern conflict zone, the same region hit by severe drought and multiple floods in 2012.

“Wherever we build houses, we now look at two main things - either to control flood water or to provide water where there is not enough,” McKerrow said. He said the requests for such work had come from beneficiary surveys.

Kumara, the DMC deputy director, also noted that preventing victims of natural disasters from abandoning their homes was increasingly featuring in policy discussions among government and humanitarian agencies.

“The aim should not be to stop human mobility, but rather to reduce the number of situations where people move because environmental factors force them to.”