Bangladesh must strengthen its urban search and rescue capacity, say experts, following the collapse of an eight-story factory building outside Dhaka which left nearly 400 dead.

“This most recent tragedy highlights the need for the government to do more in the area of urban search and rescue,” Gerson Brandao, humanitarian affairs adviser to the office of the UN resident coordinator, told IRIN.

“Noble efforts were made to reach many of the survivors, particularly by volunteers, but unfortunately it was not enough.”

Brandao’s comments follow criticism of the authorities’ overall handling of the operation, and the Bangladeshi government’s rejection of international search and rescue offers, including by members of the International Search and Rescue Advisory Group (INSARAG), a network of disaster-prone and disaster-responding countries and organizations dedicated to urban search and rescue (USAR) and operational field coordination, just hours after the building’s collapse.

Many describe it as Bangladesh’s worst industrial accident since the country gained independence in 1971.

More than 2,000 volunteers and local rescue teams rushed to the scene to assist. However, they soon found themselves overwhelmed and ill-equipped.

“There is a notable gap in specialized and sophisticated equipment such as micro-cameras which can go under the rubble to search for survivors, as well as scanners that can detect human heat,” Brandao noted, adding that there was also no sniffer dog capacity to identify survivors under the rubble. 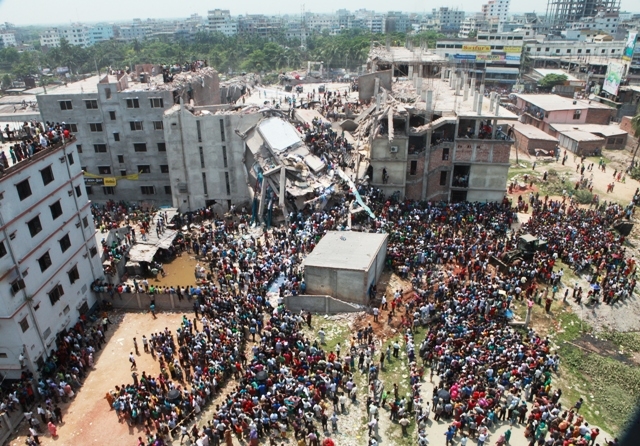 In addition to a lack of specialized equipment, however, many of the volunteers, including some trained by the authorities to respond in such situations, did not even have protective gear such as gloves and helmets.

“Rescuers were even asking members of the public for flashlights,” said one international aid worker who preferred anonymity and who visited the scene.

Others criticized the overall coordination of the operation, describing it as “confused”.

“The incident reminds us that we are not prepared for a major earthquake. When we face difficulties to operate rescue operations in one building, it’s not difficult to understand what might happen in a major earthquake,” said Mehedi Ahmed Ansary, an earthquake expert and professor at Bangladesh University of Engineering and Technology.

Densely populated Dhaka is at high risk of an earthquake, experts say.

“In a major earthquake, 100-200 buildings may collapse. It would be difficult to conduct a rescue operation with the present capacity,” Ansary said.

Brandao also called for institutional reform, noting that in Bangladesh the fire service and civil defence are one institution, but the two bodies have different sets of skills.

“The Bangladesh fire services and civil defence are very well trained in dealing with fires, but lack the capacity and training needed for civil defence, of which urban search and rescue is a component,” he said.

According to the Department of Disaster Management, the government has 23,000 trained volunteers and plans to train 66,000 more in the coming years. However, confidence even within the department is low.

“If we can’t manage a rescue operation in one building, how can we possibly manage one when many buildings collapse,” said one official who asked not to be identified.