“There’s no real shelter here. People are getting diseases and the rainy season will make it even worse,” Ali Mia, a 45-year-old Rohingya father-of-six, whose home in Sittwe, the capital city of Rakhine State, was burned during inter-communal violence in June, told IRIN.

Set to begin as early as May, the rains will come in daily downpours, which, in the crowded and unsanitary conditions of Rakhine’s dozens of camps for internally displaced persons (IDPs), could hasten the spread of disease, aid workers warn.

“We’re very worried with the monsoon season coming up. If these people are not relocated we could see a very big humanitarian problem, [including] disease outbreaks,” said Peter Paule de Groote, the head of Médecins Sans Frontières (MSF) in Myanmar. "The water level will rise and some of it will be very, very muddy, if not flooded, and there’s nowhere for them to go.”

Sectarian clashes between Buddhists and Muslims in June and October left 167 dead, hundreds injured and more than 125,000 displaced in Rakhine State, according to government estimates.

More than 10,000 homes were burned or destroyed in the violence.

Under Burmese law, the Rohingya are de jure stateless. There are an estimated 800,000 Rohingya in Myanmar and human rights groups say they have long faced persecution and discrimination.

On 19 April , the UN Refugee Agency (UNHCR) called for urgent action and increased financial support to improve conditions of the displaced to avert a “humanitarian catastrophe”.

Some have camped in paddy fields or low-lying areas that will flood once the rains start.

Already, international aid groups are reporting high cases of respiratory and skin infections, worms and diarrhoea in the camps they have visited. Such diseases are much more likely to spread in sodden conditions, they warn. 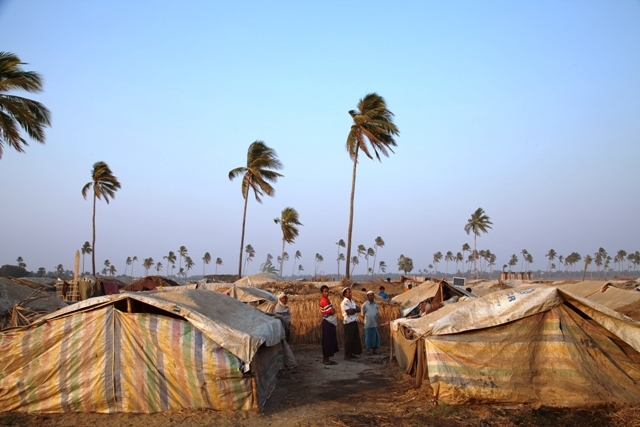 Moreover, the onset of rains will likely be accompanied by a spike in water-borne diseases, and the camp’s primitive latrines remain vulnerable to overflowing from rainfall.

But it is the risk of those displaced not yet registered with the authorities that is most worrying.

While partners are providing life-saving assistance to more than 100,000 IDPs registered by the government, there is a sizable population (15,000 individuals) that is displaced but has yet to be allowed access to humanitarian aid.

Several thousand are living in makeshift sites that have not been sanctioned by the government. IDPs in these locations receive limited to no assistance as opposed to those in official camps.

Unlike in official camps, where residents are supplied with waterproof tents, residents of Maw Than Mia, home to some 1,000 unregistered displaced, sleep in tiny huts constructed of nothing more than thatched straw.

They are particularly vulnerable because their camp is spread across a low-lying field which, previously used for rice cultivation, is designed to flood.

Aid agencies are calling on the government to address the shelter needs as a matter of priority, noting adequate land needs to be identified and allocated and challenges related to water and sanitation addressed, particularly in Myebon and Pauktaw.

According to the UN Office for the Coordination of Humanitarian Affairs, humanitarian partners, in collaboration with the government, have developed an inter-agency preparedness plan for Rakhine running from March to June.

The plan aims to address preparedness and response actions with specific sector/cluster response plans for two scenarios: 1) a potential natural hazard such as a cyclone which would affect over 250,000 people across the state and 2) a potential deterioration of the humanitarian situation during the rainy season, particularly in the camps.