Abdel Tawab Haron, in his late 40s, is late harvesting the wheat at his farm in Fayoum Governorate, 90km southwest of Cairo.

“This is catastrophic,” Haron told IRIN. “I can lose everything if I fail to harvest the crop.”

But fuel shortages mean the cost of renting the machinery he needs to harvest the wheat would be almost the same as any income he would earn from selling it.

Like Haron, tens of thousands of farmers in Egypt are preparing for the annual wheat harvest, and the government - which faces a growing population, a sputtering economy and decreasing amounts of farmland - is hoping for a big crop.

But shortages of the subsidized diesel needed to run irrigation and harvesting equipment are threatening food security.

The tractor owner in Haron’s village used to charge him 12kg of wheat per every 120kg harvested. These costs have now doubled, as have those for renting a chaff cutter.

“He tells me that he buys the diesel to run the machine for more money,” Haron said. “This means that I will end up distributing everything for free.”

From before dawn to late evening, long queues of trucks, tractors and farmers holding jerry cans form in front of petrol stations.

“A lack of fuel brings a total halt to agricultural machinery - and all agricultural activities as a result,” Abdullah Al Maamoun, a researcher from local NGO Land Centre for Human Rights, which defends the rights of farmers, told IRIN.

“This means that the farmers will not either harvest the crops or start any new farming cycles.”

Farmers face a choice between either waiting for subsidized fuel or turning to the higher prices on the burgeoning fuel black market. A litre of diesel on the black market costs 3 pounds ($0.44), instead of the subsidized rate of 110 piastres ($0.16).

"This is catastrophic. I can lose everything if I fail to harvest the crop"

A Ministry of Petroleum official said on 13 April that his ministry had decided to pump as much as 2,500 tons of diesel into the market every day to help farmers through the current harvest season.

“These amounts are enough to bring an end to the crisis,” Mahmud Nazim, a senior ministry official, told the newspaper of the Freedom and Justice Party. (Arabic).

He said that in order to curb the smuggling of diesel, his ministry would send fuel directly to agricultural associations across Egypt, which would in turn distribute the fuel to farmers.

But farmers are still waiting to see these announcements put into practice.

To avoid paying the high cost of black market fuel, Haron has decided to search at home for an old scythe his father used long ago to harvest wheat manually, a physically punishing and time-consuming task.

The government - struggling under the financial impact of two years of unrest - has drawn up plans to reduce food imports by buying more locally produced wheat.

But the government said in a statement on 3April that Egypt's wheat reserves are enough for only 81 days.

Seventy-five per cent of Egypt's wheat consumption comes from other countries. Last year, the country imported 11.7 million tons, according to the UN’s Food and Agriculture Organisation (FAO).

President Mohamed Morsi’s government is aiming to reverse those percentages and produce 75 percent of wheat locally.

The government has allocated 11 billion pounds ($1.6 billion) to buy 4.5 million tons of wheat from the farmers during 2013, according to the Middle East News Agency.

But the fuel shortage crisis might sabotage all this. Al Maamoun says few farmers will think of selling their wheat to the government.

Machinery involved in agriculture in Egypt 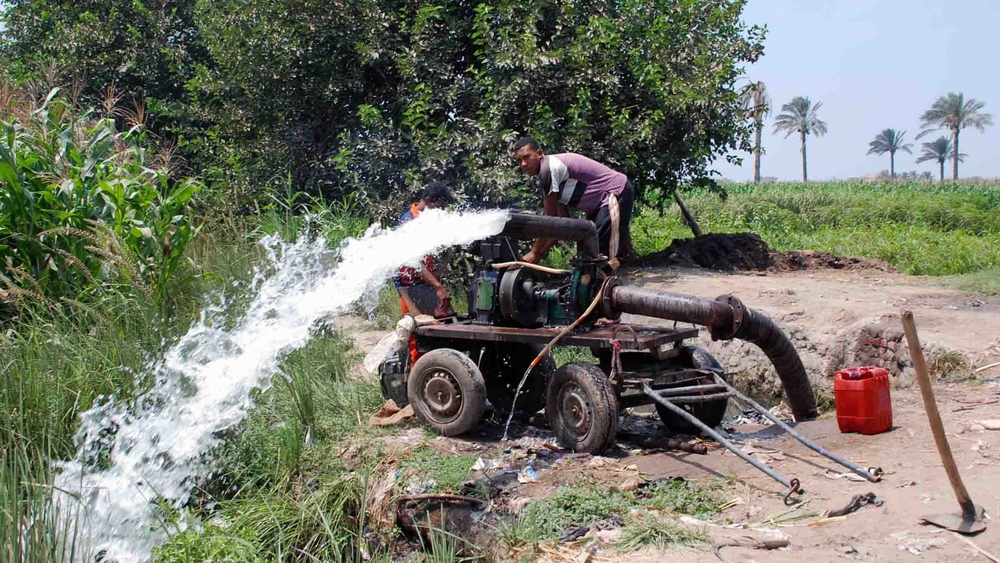 “With farmers paying more money to get the fuel from the black market, the production cost of all agricultural products will rise,” he said.

“This means that the 400 pounds offered by the government to buy the wheat will be dwarfed in front of all the money the farmers paid to grow the wheat, irrigate it and then harvest it. This is why the farmers will think of selling their crops to the private sector, not to the government.”

Ragaa Abdo Al Metwaly, a 55-year-old farmer from Monshaat Abdel Rahman Village in Daqahlia, about 120km north of Cairo, says that, like many farmers, she will sell to the highest bidder.

“The only solution for the government is to raise the price it will buy the wheat for,” she said. “Farmers have bank debts to repay and families to feed; the government should have some mercy on us.”

But the delays farmers have faced in harvesting and selling their crop leaves them exposed.

Al Metwaly says she does not know how to keep insects away from her wheat, and quality quickly deteriorates.

Hashim Farag, the head of the Small Famers' Association, warns against further delaying the harvest.

“Association members report crop loss already because of their failure to harvest the wheat in time,” said Farag, whose union has thousands of members, each with less than 2.5 hectares of farmland.

“Insects and birds eat the crops, and this means that the farmers will lose half of their production even before they harvest the crops.”

The government finds itself in a bind: It wants to buy as much of the Egyptian crop as possible for its subsidized bread, avoiding using foreign reserves for imports, but its the current financial problems make its ambitions difficult to fund.

Talks on a $4.8 billion loan from the International Monetary Fund have struggled over the Fund’s desire for reforms to the subsidy system.

Other countries like Qatar and Libya have stepped in - the former offering a loan of $3 billion and Libya depositing $2 billion in the Egyptian Central bank.

Meanwhile, the government is finding it increasingly difficult to afford the 10 billion pounds ($1.5 billion) it spends on subsidized bread, and any disruption could provoke further unrest. (Arabic).