Humanitarian agencies in the Democratic Republic of Congo’s (DRC) North Kivu Province are working to increase their support for hundreds of thousands of displaced people living outside formal camps with little humanitarian support, often relying on the kindness of sometimes equally vulnerable host communities.

Fighting in North Kivu in 2012 displaced some 590,000 people, according to the UN Office for the Coordination of Humanitarian Affairs (OCHA). In total, some 914,000 people are displaced in the province. According to the NGO Refugees International (RI), some 802,000 of these are living outside formal camp settings.

“Only 112,000 North Kivu IDPs live in UNHCR-operated camps, while 230,000 are in spontaneous settlements, and the rest are living with host communities,” RI advocate Caelin Briggs told IRIN following a mission to the province.

“Across the board, we found extremely harsh conditions, particularly in the non-official camps - spontaneous settlements and people living with host families,” she added. “Food is the number one need mentioned. For instance, between July and December 2012, there was no food distribution in Masisi [territory]. They try to get day labour on nearby farms, but there is just not enough work to go around.”

Briggs noted that protection was another issue of concern. “In Goma, there is a big threat to women fetching firewood, especially as they now have to go deeper into the forest for it,” she said. “They are advised to go in groups, but this is not really helpful against a group of armed men.”

The DRC government has not yet ratified the African Union Convention for the Protection and Assistance of Internally Displaced Persons (IDPs) 2009 - also known as the Kampala Convention - the world’s first legally binding instrument aimed specifically at aiding people displaced within their own countries.

“Until recently, there was very little assistance and coordination of activities in spontaneous sites and for IDPs living in host families and other displacement situations,” Simplice Kpandji, the UN Refugee Agency’s (UNHCR) public information officer in DRC, told IRIN. “Over the last few months, the humanitarian community has sought to create a new, more holistic coordination/assistance system which includes not only CCCM [camp coordination/camp management] camps but also other displacement situations.”

“Approaches to distribution, registration, security… etc. are being harmonized to ensure that all IDPs in various situations of displacement are treated equally,” he added.

RI is making the case for the “the activation of a national-level CCCM cluster to jointly address the needs of displaced persons living in CCCM camps as well as those living in spontaneous settlements and with host families”. In some countries, humanitarian actors working within a particular field, such as shelter or health, coordinate their activities through “clusters”. CCCM activities in the DRC are handled by a “working group” under the larger protection cluster.

A view over a camp for the internally displaced in Katoyi in Masisi territory in the Democratic Republic of the Congo's North Kivu on June 4, 2012 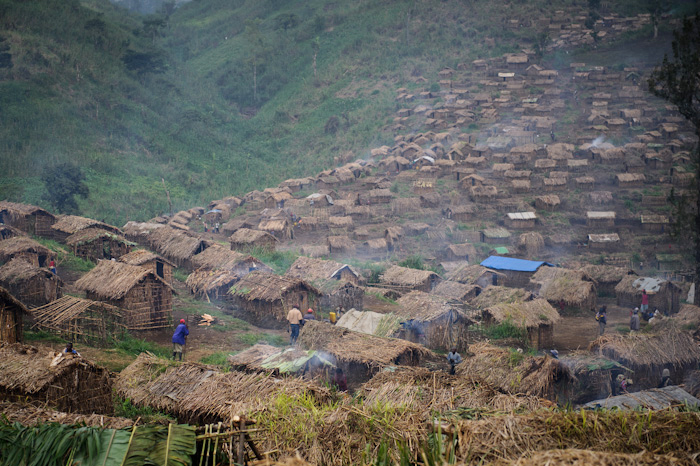 Kpandji said that although the CCCM working group has been working “very much like a cluster”, it lacks access to funding mechanisms available to clusters, such as the Central Emergency Response Fund and pooled funds.

“Little is done for IDPs outside the formal camps, which is why IOM has developed a strategy to care for IDPs in spontaneous sites and those living with host communities,” said Laurent de Boeck, chief of IOM’s mission in the DRC.

“IOM has a three-tier approach to IDPs outside the camps: understanding and registering the people displaced using a displacement tracking matrix; analyzing the pull-push factors leading to displacement, and assessing the ability of host families to cope with crisis; and, based on the needs, deliver the immediate needs of the IDPs [including] food and non-food items, and encourage other humanitarian actors to help as well.

De Boeck noted that displacement from one community to another could create tensions and make host communities vulnerable to possible insecurity.

He said access and identification of host families was particularly difficult. “Often both the displaced and the host families are vulnerable so there is a dilemma on who to focus on,” he said.

“One risk for UNHCR and partners is encouraging the creation of collective sites in areas with insufficient/inadequate conditions to provide effective protection and assistance,” said Kpandji.

“Contingency plans in the province should be updated regularly to ensure that suitable reception areas are identified in advance, and that the humanitarian community is prepared,” he added. “Close cooperation with authorities - who should identify land for displacement sites in advance - should be maintained.”

According to De Boeck, there is also a need for better harmonization between national humanitarian policy and regional implementation.

“In the overall approach, there is a misunderstanding between Kinshasa and the provincial level. Efforts are focused very much on North Kivu, with no systematic approach in other provinces,” he said. “There are good initiatives by the government, i.e., the ministerial and national policy on development as well as a new governmental decree giving the Ministry of Humanitarian Action a coordination role. This needs to be reflected at the provincial level.”

He added, “There is a need to dialogue with the population to better understand their needs and how to meet them.”

Kpandji also pointed out the need to develop the agencies’ ability to rapidly evaluate and respond to displacement, “in particular with regards to child protection and support to community-based protection mechanisms”.

“Funding is a major challenge. We are really advocating for increased funding for IOM and UNHCR, as well as for OCHA’s US$30.5 million request to cover the basic needs of IDPs in North Kivu,” said Briggs.

“Our needs are $13 million over 12 months, and we will have $4 million before the end of the month, allowing us to work for six months… This is all for our work in North Kivu,” said de Boeck. “We will also be appealing for funds for our operations in Province Orientale and South Kivu.”

“Funding remains an issue. Sure, it is important, but equally as important - and arguably more important - is the end of fighting, an end to these sporadic bouts that prevent access and [hinder] aid organizations’ work,” said one aid worker, who preferred anonymity. “Money without access does not get us anywhere.”