Farmers near Abidjan, Côte d’Ivoire’s commercial capital, are abandoning cassava, a staple for many Ivoirians, and switching to natural rubber, a move which may jeopardize food self-sufficiency, analysts say.

Large numbers of farmers began to take an interest in rubber in the past decade thanks to high prices resulting from a surge in global demand, Alphonse Gnaoré Koh, an expert from the National Rural Development Agency (ANADER) in Dabou, a main rubber centre 50km west of Abidjan, told IRIN.

The rubber rush is pushing out farmers of cassava, agro-economist Daouda Dahaux from Abidjan’s Swiss Centre for Scientific Research told IRIN, and there is evidence that cocoa farmers may not reign supreme for long either.

Côte d’Ivoire started to grow rubber industrially in the 1950s, and the crop became more widespread when village plantations were created in the 1980s, according to Koh. The crop was originally grown in the southern forest areas along the coast but is now spreading north, especially in central-western and central-eastern parts of the country.

Farmers say rubber gives them a more stable and predictable income because they can harvest 10 months a year, whereas cassava is harvested only once a year. Moreover, harvesting cassava is demanding work compared with rubber which is easier to grow, Dahaux said. A rubber tree can live for 40 years.

“With rubber, we harvest and we are paid every month. It’s like being a civil servant,” farmer Jean Essis N’Guessan, based in Debrimou, a village near Dabou, told IRIN. N’Guessan started to plant rubber last year on his cassava farm and plans to replace all the cassava in three years when the rubber trees will have grown. Natural rubber can be harvested seven years after the trees are planted.

His brother, David Esmel, is a retired civil servant and planted rubber along with cassava two years ago. “For many farmers, rubber is more important than cassava now,” N’Guesssan told IRIN. Revenues from rubber are much more substantial than from cassava, he said. “With rubber, you can have the lifestyle of someone working in Abidjan. It’s attractive.”

Farmers’ interest in rubber has also been boosted by the political crisis over the past decade, Dahaux told IRIN. “In the face of political uncertainty, many people have opted for perennial crops.”

Côte d’Ivoire, Africa’s top rubber grower and the seventh largest in the world, produced 230,000 tons of rubber in 2012, according to Albert Konan, executive secretary of the Rubber Development Fund. Annual production of 600,000 tons is envisaged by 2025, he said.

A man tapping rubber near Dabou 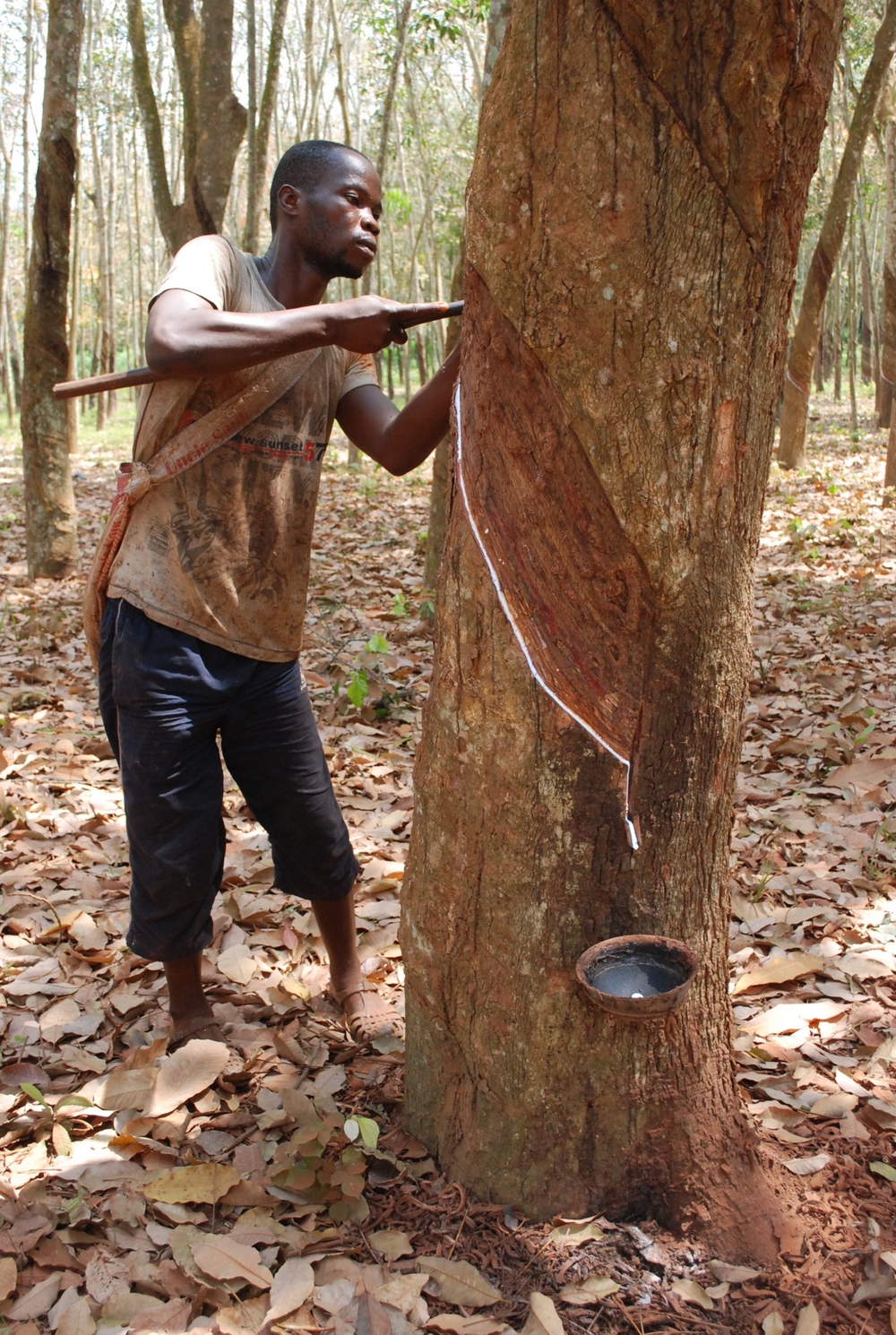 About two-thirds of the farmland in Dabou region is used to grow rubber and the trend is on the rise, Koh said.

A cultural tradition in jeopardy?

However, cassava is widely used in southern Côte d’Ivoire to produce attiéké, a side dish accompanying most meals, and the switch to rubber could lead to cassava shortages in future.

“If nothing is done to support cassava, and if we consider the population growth in a city like Abidjan, there will likely be substantial shortages in 10-15 years,” Dahaux said. “The threat is real.”

“There’s less and less cassava in the region,” Madeleine Coulibaly, 48 and mother of three, told IRIN. “Without cassava, how will we eat in the future?”

Southern ethnic groups, including the Adioukrou from Dabou, are among those making balls of attiéké and selling them, but producers now have to travel up to 150km to buy the cassava, the price of which has consequently risen, Coulibaly said.

“Without cassava, Adioukrou women don’t have anything to do,” said Joséphine Koproyeï, 62.

The National Centre of Agronomic Research has created new varieties of cassava with better yields in the past few years, bringing women more autonomy and a sense of achievement.

Coulibaly complained that this is not the case with rubber. “Our husbands are planting rubber for them, and only for them. It does not suit us,” she said.

A cultural tradition is in jeopardy, stresses Jacques Lathes, chief of a neighbourhood in Débrimou. “Attiéké is part of the culture of the Adioukrou people. Our region derived its wealth from cassava.”

“All the remaining cassava plantations are about to be invaded by rubber,” Lathes told IRIN. “This is worrying.”