When Typhoon Bopha, one of the strongest storms to hit the western Pacific in recent memory, slammed into the Philippine island of Mindanao last year, there was much speculation in the media about the growing influence of climate change.

But science is still uncertain about whether atmosphere-warming greenhouse gas emissions have caused a detectable change in cyclonic activity.

This was reported by the UN Economic and Social Commission for Asia and the Pacific (UNESCAP)/World Meteorological Organization (WMO) Typhoon Committee in a new assessment considering the western North Pacific Ocean basin.

The tropical cyclone activity in this region is the most intense of any basin in the world. Cyclonic activity provides about 11 percent of the total rainfall in that part of the basin, and the storms - which are known as typhoons in this part of the world - have caused substantial damage and death.

Their findings are in line with the 2012 Intergovernmental Panel on Climate Change's (IPCC) special report on Managing the Risks of Extreme Events and Disasters to Advance Climate Change Adaptation (SREX). Scientists familiar with the SREX review said that researchers were uncertain how tropical cyclones might have changed since pre-industrial times because of lack of data, the questionable quality of older data, and a limited understanding of the links between global climate change and tropical cyclone activity.

A WMO expert team’s assessment in 2010 was also inconclusive about this link.

The scientific community is currently divided between some who believe that anthropogenic climate change has already had a detectable effect on tropical cyclone activity, and others who view the observed changes in cyclone intensity, frequency and paths as indistinguishable from natural variability. UNESCAP/WMO and IPCC's SREX reflect the view that there is insufficient data to take a definitive position.

"The experts also found that in coming years, 'it is likely that the global frequency of tropical cyclones will either decrease or remain essentially unchanged owing to greenhouse warming. Moreover, some increase in the maximum wind speed and rainfall rates of tropical cyclones in the 21st century is likely"

Yet most groups that have published papers on the matter project a growing future influence of human-induced climate change on tropical cyclones, including increased average intensity, decreased global frequency and increased tropical cyclone rainfall rates.

Tsz-Cheung Lee, of the Hong Kong Observatory and one of the authors of the new UNESCAP/WMO assessment, said that reliable tropical cyclone data is available only from the 1950s. This leaves a relatively short period from which to draw conclusions, especially when there is significant variability in western North Pacific cyclonic activity between decades.

In the mid-1960s, “we began to be able to see tropical cyclones with satellites and thus could monitor large expanses of ocean for the presence of cyclones,” explained Thomas Knutson, a US hurricane specialist and an author of the new assessment. “Prior to that, and especially prior to aircraft reconnaissance beginning in the 1940s, historical records [were] mostly dependent on chance encounters between tropical cyclones and ships at sea to detect the presence of tropical cyclones - especially the ones that never made landfall.”

Knutson, who is a climate modeller with the US National Oceanic and Atmospheric Administration, added that the practices for observing typhoons “have changed a lot over time, so that if one sees trend-like behaviour, it is difficult to know whether it is a real climate-change effect or just due to issues with changing observing systems over time.”

As part of the study, researchers asked individual countries in the basin to provide historical data on tropical cyclones that had made landfall.

“Our assessment of that information again led us to conclude that there is not any clear anthropogenic climate-change signal in the tropical cyclone data to date,” said Knutson.

The assessment, produced after two years were spent reviewing new studies, found considerable variations in cyclonic activity from year to year and as well as between decades. But the causes are complex, Lee said in an email to IRIN, and may include the influence of human-induced climate change and natural factors like El Niño/La Niña. The assessment has called for more studies.

Changes on the way?

The experts also found that in coming years, “it is likely that the global frequency of tropical cyclones will either decrease or remain essentially unchanged owing to greenhouse warming. Moreover, some increase in the maximum wind speed and rainfall rates of tropical cyclones in the 21st century is likely,” said Lee.

Mass devastation in the wake of Typhoon Bopha. More than 6.2 million people were affected by the storm which struck the southern island of Mindanao in December 2012 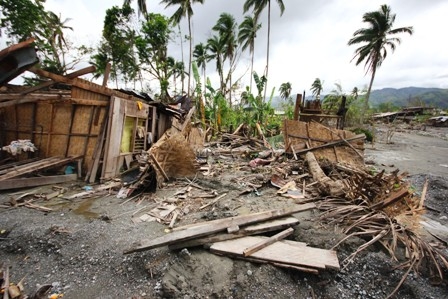 “The vulnerability of coastal regions to storm-surge flooding is expected to increase with future sea-level rise and coastal development. Moreover, the assessment also noted that there [has] likely [been] a shift of the tropical cyclone track pattern in the western North Pacific in the last couple of decades, though the possible connection of this observed change with anthropogenic climate change is still subject to further research,” he said, citing the assessment.

Knutson says current short-term forecasts of tropical cyclones are better for predicting storm tracks rather than intensity. “Intensity seems to be a tougher problem to address, even with the help of our best computer forecasting models.”

Lee says Typhoon Bopha, in his opinion, was an extreme event. "In studying the impact of climate change, we usually refer to the changes in climate (average of weather) over a period of time, say decades or centuries. For individual extreme events like Bopha, it will require further analysis and model simulations to confirm the relative contribution of anthropogenic climate change to the chance of occurrence of this extreme event.

“Nevertheless, as per the projections from a number of studies against the background of global climate change, the chance of having more intense tropical cyclones which pack… more heavy rain is likely to increase in the 21st century."

Knutson says Lee's views on Bopha are consistent with his own. Asked how scientists can be certain about the influence of future emissions given that they are uncertain about the impact of past emissions, he said: "The relatively modest level of likelihood that Dr Lee and I attach to such projections reflects, in part, the fact that such a change has not yet been detected in the observed tropical cyclone record… The changes of intensity induced by climate change that we are referring to would be difficult to detect at this stage even if we had 60 years of perfect intensity data in the Northwest Pacific, which we do not.”