Clashes during the second anniversary of the revolution which deposed Egypt's former president Hosni Mubarak have brought the number of Egyptians killed since the uprising began to at least 1,085, according to an IRIN tally of media reports, Ministry of Health figures and independent assessments by local NGOs.

As Egyptians pour into the streets once again today, to mark the second anniversary of Mubarak’s departure from office on 11 February 2011, more violence is expected.

Human rights campaigner Mohamed Bahnasy told IRIN the total number of casualties could be far higher and called for a proper investigation.

Bahnasy was a member of a fact-finding commission formed by the government following the revolution to collect data about the number of people killed and injured during the uprising. But he said manipulation and destruction of evidence - he accuses the former State Security Agency - prevented those responsible from being held accountable and misled investigators about the real number of revolution victims as well as the people responsible for killing and injuring them.

“Others were killed, but were not considered revolution victims," he added, referring to people who were injured during the revolution, taken to hospital for treatment, and died only after they left hospital.

Egypt’s so-called Arab Spring was always seen to be peaceful compared to its counterparts in Syria, Libya and Yemen. But the numbers tell a different story. In the absence of holistic official statistics, here is a round-up of the human toll of the Egyptian revolution in the last two years:

The 25 January uprising: Most victims fell during the initial revolt itself, which started on 25 January 2011 (when thousands of Egyptians took to the streets to demand more social justice and political rights) and ended 18 days later with the exit of Mubarak, who had ruled Egypt for 30 years. According to the Health Ministry, 846 people were killed and 6,467 others were injured, though these figures are seen by civil society organizations to be extremely conservative and are highly debated. Some of those injured were deliberately shot in the eyes with rubber bullets, hospitals reported. Two of the bloodiest days were 28 January, when police attacked protesters assembled in central Cairo's iconic Tahrir Square after Friday prayers, and 2 February, during the so-called “battle of the camels” when hundreds of Mubarak sympathizers stormed into the square on camel and horseback in a desperate bid to disperse the demonstrators. (The ensuing clashes left 11 people dead and over 600 people injured).

Mubarak delegated his powers to the Supreme Council of the Armed Forces (SCAF), an 18-member body made up of top commanders of the Egyptian army. Mubarak's downfall, however, did not put an end to violence.

The Maspiro incident: Egypt’s first bloody day post-revolution came almost eight months after Mubarak’s departure, when thousands of Christian protesters headed to the national TV building, known as Maspiro, to protest against an earlier attack on a church in southern Egypt. Small skirmishes between the protesters and military policemen guarding the building evolved into bloody clashes resulting in the death of 25 protesters and the injury of 329 others, according to the Health Ministry. Local NGO Egyptian Initiative for Personal Rights described the gruesome details of the massacre in one of its reports (Arabic). Video footage showed armoured army vehicles running over protesters on the streets.

Justice for the victims: Almost a month later, on 19 November 2011, hundreds of protesters converged on the Cabinet Building in central Cairo to demand justice for the victims of the revolution. Clashes quickly erupted between protesters and police guarding the building, leaving 44 people injured. These clashes paved the way for bloodier clashes a few days later near the Interior Ministry in downtown Cairo, leaving 65 people dead and more than 4,500 injured (Arabic) in the most violent clashes since the revolution.

On the second anniversary of the 2011 revolution, policemen in Egypt pull one protestor by the hair after arresting him in central Cairo, the scene of violent clashes between policemen guarding state institutions and hotels and protestors 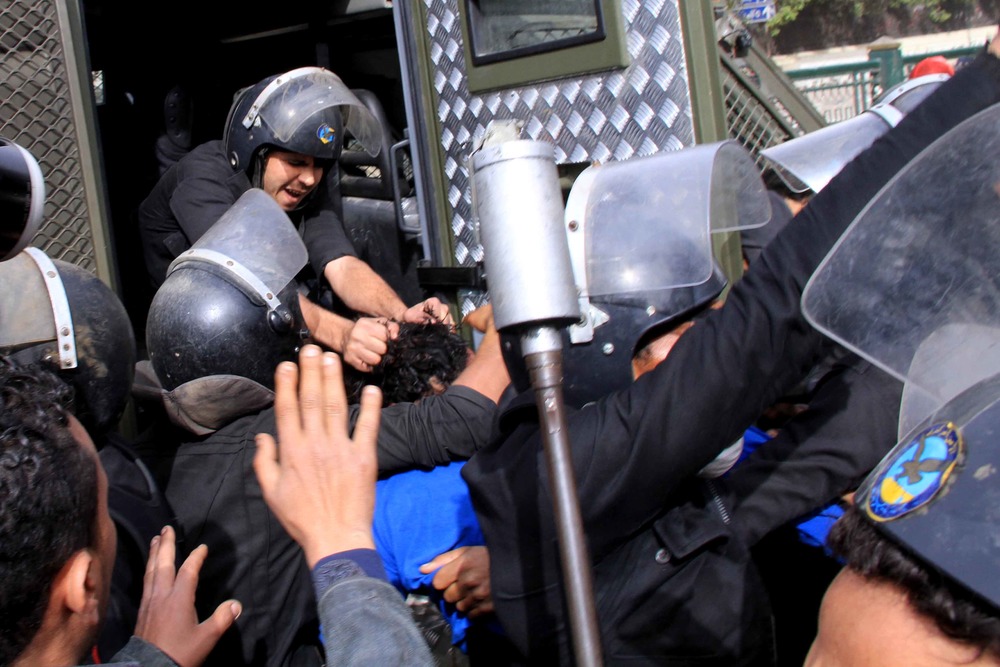 Football riot: On 1 February 2012, a stampede after a football match in Port Said killed 71 fans, according to the Health Ministry - though media reports place the number between 73 and 79 (Arabic) - and injured hundreds of others. The fans belonged to Ultras Ahlawy, a group of supporters of Al Ahly football club which was heavily involved in the anti-Mubarak protests and in clashes against policemen during and after the revolution. Video footage captured police standing by as the fans were attacked with knives and sticks by alleged supporters of the opposing club, Port Said’s home team, Al Masry. Many were convinced the incident was a settling of old scores between police and politically active football fans. (Some policemen are to be tried in a second round of prosecutions related to the incident). One year later, in January 2013, protests in Port Said sparked by death sentences handed to 21 locals convicted in the stampede killings, led to 40 deaths in clashes.

Anti-military protest: On 2 May 2012, there was another flurry of violence around the Defence Ministry, northeast of Cairo, when thousands of demonstrators, mostly Islamists, went to the ministry to demand a quick end to the rule of the military, which was leading the transition. At least 11 people were killed and hundreds of others injured in scenes reminiscent of the TV building onslaught on peaceful Christian demonstrators.

Second anniversary of revolution: On the second anniversary of the anti-Mubarak revolt, tens of thousands of Egyptians took to the streets, in almost all governorates, not to celebrate the removal of the former president, but to protest against the new president. On 25 January 2013, clashes erupted between policemen and demonstrators in several cities, resulting in the death of several people on both sides, including 10 in Suez. Clashes continued until 4 February, killing another 15 people in other governorates, including Cairo.

Post-revolution elections brought to power Islamist President Mohamed Morsi of the Muslim Brotherhood, but in his seven months in power, he has angered the youth and opposition forces who started the original revolution. They say he is undemocratic and exclusionary in his politics, looking to further his own party’s gains, and not keeping his promises. The debate over what many see as an Islamist constitution, combined with a deteriorating economy, rising food prices and continued insecurity have not helped. His supporters argue he inherited many problems from Mubarak’s days and has not been given the chance to fix them.