Indian trawlers are taking their toll on northern Sri Lanka's fishing sector which is struggling to recover almost four years after a decades-long civil war.

"Since the conclusion of the civil war, Indian trawlers have been coming in closer and closer," Maarten Bavinck, director at the Amsterdam-based Centre for Maritime Research, told IRIN, noting that over half of the 5,000 trawlers based in southern India are completely or seasonally dependent on Sri Lankan waters.

Each day, hundreds of trawlers working out of the southern Indian fishing ports of Rameshwaram and Nagampadam cross into Sri Lankan waters, heading especially for Palk Bay which is known for its exceptionally rich fishing grounds.

In the late 1970s the Indian fishing authorities in some areas - in an effort to protect local small fishermen - brought in the so-called "three-four day rule", which ensures that large trawlers stay in harbour three days a week.

During their four days at sea, however, Indian trawlers routinely enter Sri Lankan waters, causing smaller Sri Lankan fishing boats to limit their fishing or not fish near the trawlers.

Fishermen in Vaddamarchchi, Jaffna District, go out to sea just 60 days a year, while in Pesala, a fishing village in Mannar District, they go out 85 days, Bavinck said.

"Normally, one would expect fishermen to go out for at least 200 days a year," the expert said, adding that many fishermen had no choice but to find alternative work.

On average a fisherman in northern Sri Lanka earns just over US$50 a month.

In some cases fishermen were losing as much as half their yearly average income of US$600, research by Bavinck and two other colleagues (Joeri Scholtens and Anandan Soosai) indicated.

Nineteen percent of the surveyed fishermen said their biggest concern was the encroaching trawlers, the research found. 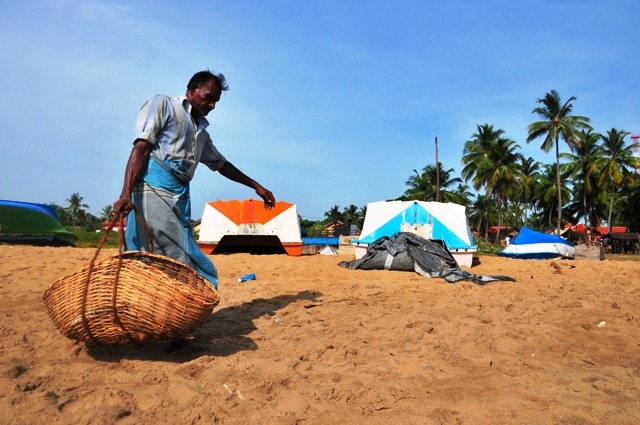 "There still remain limited security restrictions on the use of certain [northern Sri Lankan] fishing harbours and deep-sea fishing. But more disturbing is the competition with Indian fishing trawlers that intrude into Sri Lankan waters," said Muttukrishna Sarvananthan, a principal researcher at the Jaffna-based Point Pedro Institute of Development.

"We simply cannot fish. They come in the hundreds and in bigger boats. The smaller boats can't compete. If we do, they can [deliberately] damage our nets and gear," said Aruldas, a fisherman from the village of Point Pedro in Jaffna District.

He now restricts his fishing to shallow waters where the trawlers cannot operate. "It's safer, but [there are] less fish and more and more people like me are coming here," he said.

"In 1980, almost 30 percent of the country's fish catch was caught in Jaffna District," Sarvananthan said.

In 2003, during a ceasefire between the government and the Liberation Tigers of Tamil Eelam, fishing accounted for 12 percent of the provincial economy. Today it accounts for 3 percent - the same as in 2007 when war raged, according to research by Sarvananthan, based on figures released by the Central Bank.

Meanwhile, the catch by trawlers from southern India has tripled in the last three decades, Bavinck said. Though a 463km maritime boundary was agreed in 1976, many Indian fishermen still consider Sri Lankan waters their traditional fishing grounds, he added.

The two navies and the Indian Coast Guard patrol the region, but Bavinck believes only a change in the law will alter the situation.

In March 2011, the two governments set up a Joint Working Group on fishing that meets annually. "We are working towards a negotiated settlement, but we need their cooperation," said Nimal Hettiarchchi, director-general of the Sri Lanka Department of Fisheries and Aquatic Resources, noting that any workable solution needed the support of the south Indian fishing fleet.

On 22 January, a joint statement by the two countries affirmed that "the use of force could not be justified under any circumstances."