Thousands of landmines and other unexploded ordnance (UXO) scattered in parts of Somalia over past decades of conflict are emerging as a threat to the relative security now being enjoyed there, with inadequate demining expertise posing a challenge, say officials.

“[Land]mines are planted everywhere. Even mosques are not safe,” Lt-Col Farah Dhiblawe, a demining expert with the Somali National Army, told IRIN. “We were trained to use the mines to defend the country and the religion, but now Somalis are using it to harm their own citizens, which is unfortunate.”

The eastern Somalia-Ethiopia border region is among the areas heavily infested with UXOs, which were planted during the 1977 border war. Cities that witnessed more recent clashes between government troops and the insurgent Al-Shabab militia group are similarly affected.

“The laying of mines by Al-Shabab has been reported as a means to secure strategic locations. This is in addition to the detritus of war left after decades of civil conflict, and the minefields laid during the Ogaden and Somali National Movement conflicts.”

According to UNMAS, most communities in south-central Somalia suffer “from a degree of explosive remnants of war (ERW) contamination; few have the support or capacity to deal with these threats.”

A child plays with an old artillery piece in Shangani District, Mogadishu 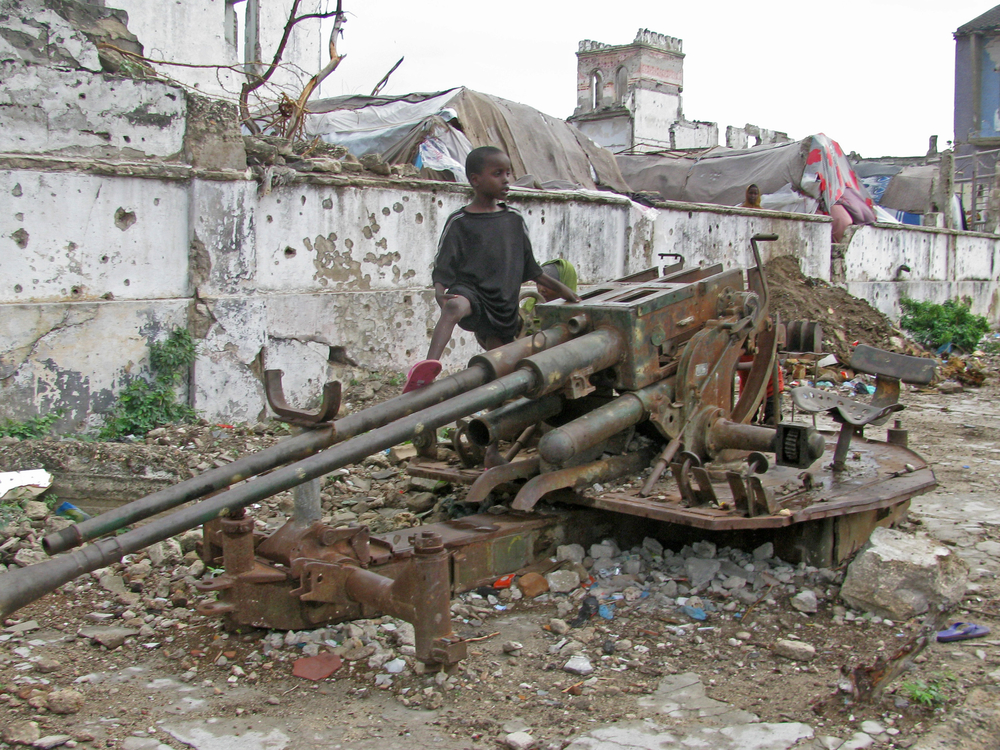 Dhiblawe, who has since 2007 helped destroy some 67 landmines, concurs: “Somalia did not produce enough trained people to deal with this problem of landmines for the last two decades, [and getting] professional Somalis with the right equipment is the biggest challenge.”

The central region of Galgadud, which had one of Somalia’s biggest military installations, contains large amounts of ERWs.

“The region shares a border with Ethiopia and served as an important base for the Somali armed forces, who left explosives and weapons when the government collapsed,” Ahmed Yusuf, Galgadud’s governor, told IRIN, urging the government and international partners to start demining activities there.

The south-central regions of Bakool, Bay and Hiraan are also heavily mined areas, with the Afgooye Corridor and parts of Mogadishu also containing ERWs along with some anti-personnel and anti- vehicle mines, according to the Landmine and Cluster Munitions Monitor, which also notes that “as recently as May 2012, mine-laying was still reportedly occurring in south-central and eastern Somaliland”.

In 2012, at least eight children were killed in an explosion in the Balad Town of Middle Shabelle Region. “It was 8am; I was making breakfast. Then I heard a big explosion in the madrasa where they [the children] were learning the Quran. I quickly ran towards there and saw dead bodies everywhere,” recalled Khadijo Mohamed, whose child was injured in the explosion. “I cannot still believe what happened.”

According to UNMAS, “Anti-personnel mines caused only four percent of deaths and injuries in Somalia during 2011, while UXO represented 55 percent, and unknown explosive items another 32 percent.”

Somalia in 2012 signed the Anti-Personnel Mine Ban Convention; it pledged to destroy its landmine stockpile within four years and to de-mine the country within 10. More than 21,461 UXOs and anti-personnel mines have been destroyed in the previous five years in Somalia, according to the UN Office for Project Services.

The African Union Mission in Somalia (AMISOM) is one of the agencies involved in demining operations in the country. “We know that landmines represent [a] big threat to everyone, especially if they are anti-personnel, so AMISOM stands ready to help clear these mines,” said Robert Kamara, AMISOM’s acting spokesperson.

AMISOM is planning to set up a hotline to enable people report suspicious materials, he added.

Analysts are concerned that more calm and stability in Somalia could mean more population movement, which, in turn, will increase the need for mine clearance and related activities.