Read about what we achieved.
DHAKA

Donors and the Bangladeshi authorities have welcomed the recent implementation of the joint needs assessment (JNA) approach to better serve disaster-affected communities and reduce the harassment of survivors by multiple aid agency assessors.

“The JNA approach is a welcome development,” Sarah Cooke, country representative of the UK’s Department for International Development, told IRIN in Dhaka. “It will provide a unified, evidence-based assessment of needs that will help donors, NGOs and the government of Bangladesh to work together and begin quickly to channel the right assistance to where it is needed most.”

“In a nutshell, the JNA will help the government to take decisions in regard to an emergency response quickly,” said Abdul Latif Khan, a specialist with the government’s Comprehensive Disaster Management Programme.

Under JNA, aid workers from various agencies team up with local government officials to assess humanitarian needs across different sectors (shelter, health, food, water and sanitation) to produce a single assessment as opposed to multiple assessments by multiple agencies.

“JNA will give voice to affected communities and emphasize the accountability of the agencies involved in disaster response,” said Harun or Rashid, programme manager of the Emergency Capacity Building Project (a consortium of six international NGOs working to improve the speed, quality and effectiveness of humanitarian communities in emergencies).

JNA comes in the wake of uncoordinated rapid needs assessments by agencies in Bangladesh, often resulting in duplication of effort, assessment fatigue among affected communities, and potentially conflicting data sets.

First tested in August 2011, JNA was formally adopted and endorsed by the government in May 2012, before being put into practice in June following heavy flooding in the north and southeast of the country.

Some 47 agencies participated in the JNA, which took place in close collaboration with the government, and utilized information provided by local authorities. The time from the decision to launch the assessment, until findings were presented, was three days; the findings were used by the authorities as part of their response.

According to the Asian Disaster Preparedness Center, Bangladesh is ranked one of the most disaster-prone countries in the world, with cyclones striking coastal regions almost every year.

More than two-thirds of districts are prone to natural disasters, including cyclones, floods, landslides, tornadoes and drought.

Men in the village of Boro Bighai, southwestern Bangladesh, line up for government assistance after Cyclone Sidr slammed into the country on 15 November. More than 3,000 people were killed and millions left homeless. 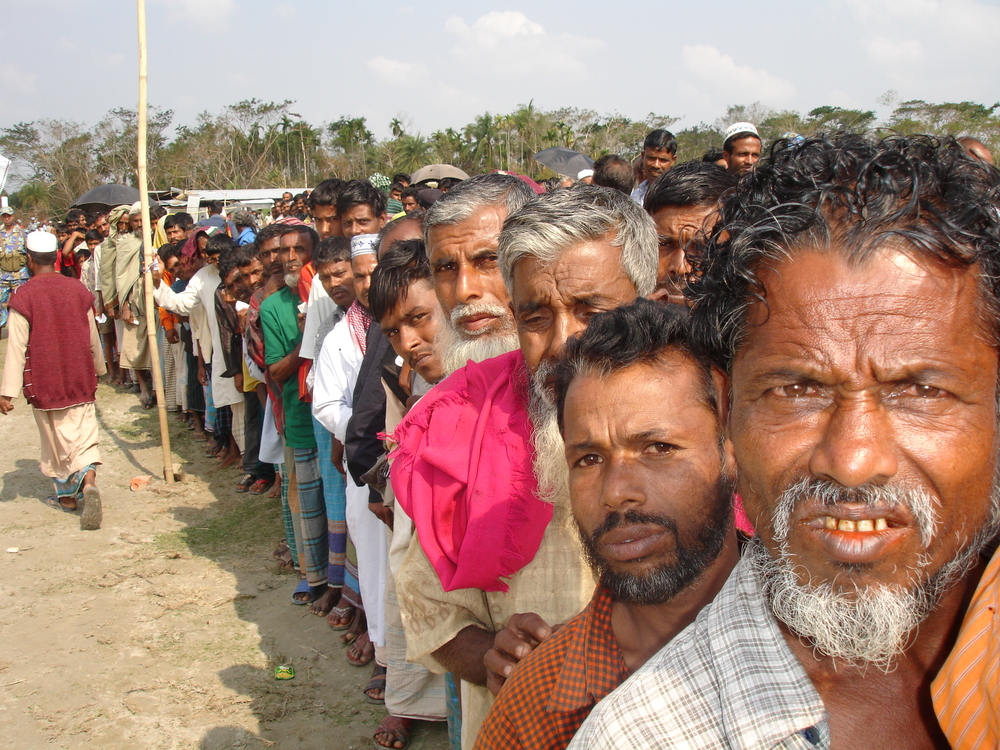 In the past, humanitarian agencies would routinely undertake their own field assessments; either on their own or in conjunction with one of their partners - and these assessments would also form the basis for financial requests to donors.

But unilaterally undertaking assessments in a country with one of the largest humanitarian communities in the world creates problems, and places an additional burden on affected communities.

In addition to 12 UN agencies in the country (five of which are directly involved in humanitarian assistance and have an emergency response capacity), there are more than 75 international NGOs, 30 of which respond to natural disasters when needed. There are also more than 2,000 officially registered local NGOs, as well as over 60,000 community-based organizations.

“The problem with this approach was that too many agencies were producing too many reports with too many intentions which were misleading to donors and overlooking peoples’ multifaceted needs after a disaster,” Kaiser Rejve, the humanitarian programme manager of Oxfam in Bangladesh, explained.

In the wake of heavy waterlogging in Bangladesh’s southwestern coastal district of Satkhira in 2010, donors received no fewer than 14 different assessments of the needs of affected communities.

“After Cyclone Aila in 2009, almost each day we saw a different team from a different agency coming and asking the same survivors what they needed,” said Ashek-E-Elahi, general secretary of the Peoples Research on Grassroots Ownership & Traditional Initiative, a civil society group working in Satkhira.

“This was a disgrace… Why is it necessary for different agencies to ask survivors - many of whom lost their homes, families and livelihood - the same question over and over again?” he asked.

Under the new system, the JNA report is shared with the Humanitarian Coordination Task Team, a joint platform formed by humanitarians to strengthen coordination.

“This approach proves that humanitarian agencies can work in a coordinated fashion despite their different mandates,” said Gerson Brandao, humanitarian affairs adviser to the office of the UN resident coordinator. He called the JNA one of the biggest achievements of the humanitarian community in Bangladesh to date.