Rains were decent across much of Mauritania in 2012 leading to hopes of a reasonable harvest. However, even in a good year farmers can produce a maximum five-month cereal supply - most small farmers produce much less - and most face 2013 with accumulated debts from previous years following decades of cyclical crises.

One third of Mauritania’s population (700,000) was estimated to go hungry in 2012 (some studies put the figure higher at one million), while 12 percent of children assessed were severely malnourished. Though the situation was much worse last year than in other years, the crisis did not come as a shock. “We face crises every year here in Mauritania,” said Sidi Mohamed, deputy director of the Commission for Food Security.

“Even if there is a decent harvest, birds and insects will eat part of it. And stocks will never cover people until the next harvest,” said Sandrine Flament, head of Action Against Hunger (ACF-Spain) in the capital Nouakchott. “You can’t even talk about stocks in most cases as people don’t really have them.” Mauritanians import 70 percent of the grains they use each year.

All vulnerable families will feel the effects of the 2012 crisis in 2013, she said.

“The big problem here is debt,” said Oumar Kane, programme officer with the Food and Agriculture Organization (FAO), which helps farmers rebuild their stocks by distributing seeds and tools to vulnerable families.

Ishmut Harabass in the village of Thirouth, 12km outside Kaédi in Gorgol Region, southern Mauritania, told IRIN the villagers lost 70 percent of their donkeys last year, one third of their sheep and goats, and one quarter of their cows. “We couldn’t buy food for them. We sold some and bought food for the others, but it wasn’t enough,” he told IRIN.

“We will go anywhere to borrow money or get things we need [seeds, animal feed, food] on credit,” he told IRIN. Any loans they do get are repayable at interest rates of up to 200 percent.

In December when IRIN spoke to Harabass, they had still not harvested, as they were waiting to plant in the floodplain once the river water had subsided - but, even so, this year is better than last. “Last year we didn’t plant at all.”

Villagers are still feeling the effects of last year. He showed IRIN his calloused hands. “We work hard, but our stomachs are still empty.”

They sold off their remaining animals last year to raise money for food, and survived thanks to the help of aid groups.

When asked what they needed the most, his list was long: “We need a pump, and food, seeds, fertilizers, vaccines for the animals…”

The UN World Food Programme (WFP) has been helping villagers set up grain banks for years in southern Mauritania, working with 428 management committees, but its Kaédi office head Marieme Sakho told IRIN the system often breaks down as people are so indebted: There is nothing to store in the bank.

FAO’s Kane said the national credit agency tried to crack down on what it saw as a culture of indebtedness several years ago, setting up the Cooperative Agricultural Union to try to control the situation.

Many farmers’ cooperatives could not access credit having a less than spotless record, and had to reduce their field sizes and sell their animals, Kane, who was with the National Society for Rural Development (SONADER) at the time, told IRIN.

“We work hard, but our stomachs are still empty.”

Rather than controlling debt, it just privatized it, said one critic, as farmers became indebted to shops and private traders, instead.

The state money lender, UNCASEM, gives short payback periods for loans, meaning many farmers are forced to pay back as soon as the harvest comes in, when prices are still low.

“We [FAO] say don’t borrow - sell a goat instead. But no one wants to sell their animals - they’d prefer to go into debt. Animals are their insurance,” he said.

UNCASEM charges 10-12 percent interest on loans, and 67 percent of its clients reimburse their loans, said Bocan Mbody, who heads UNCASEM in Rosso, near the Senegal border. This figure is much better than in the past when under half of people repaid their loans.

The Mauritanian government is currently discussing what an insurance fund for small farmers might look like, but if one is set up, it is years away.

This leaves farmers with few options. “The only thing you can do is produce more in this difficult situation ,” said Mbody, suggesting regional development committees invest more strategically in developing the agricultural sector.

Where the money goes

Harabass is one of the few men left in Thirouth: Almost all the others have left to find work in towns. Many of these men disappear alltogether, others send back 5,000 ougiya (US$16) every couple of months, said villager Khadia Maissia, mother-of-five and a member of the gardening cooperative in the village.

ACF-Spain gave vulnerable families here $48 a month for five months, then $30 for the following three. “It all went on food,” Maissia told IRIN.

Nearby in Seyinna Gababe, a village 18km from Kaédi, Demba Malal Bah, one of the village elders, told IRIN they have no food stocks at all. “Nothing. We live day by day.” People survived by going to Mali or Senegal for work, and by getting into debt.

Shops in the area will let them go into debt for several months at a time, and they are able to pay back in installments. “Some people are so indebted everywhere that they can no longer go anywhere,” said Bah. Many die indebted, his son added.

In most cases, this means debts will be passed onto descendants, but some local traders are more forgiving. “There is a culture of solidarity here in Mauritania - it is what keeps us alive,” said Bah.

Several families lost all their animals in 2012, and most cultivated nothing at all. In December villagers here were also waiting - until the river recedes - to plant.

Seyinna Gababé residents have not received the aid - fences to protect their gardens, cash transfers, seeds and tools - that many others have. As a result, the gardens they have planted are being eaten by animals and insects. “We tried to cut down trees to build a fence, but the forest guys stopped us.”

He pointed to a herd of a dozen or so cattle, the only remaining animals in the village. “Pasture is now plentiful but the animals are sick, dying,” Bah said. "Even if the harvest comes through this year, we won't get by without help."

Residents have to guard the garden 24 hours a day to make sure animals do not eat the few vegetables they have been able to grow.

A market garden next to Seyinna Gababe, a village 18km from Kaédi, which has not received help to fence it off from pests. Villagers must guard it 24/7 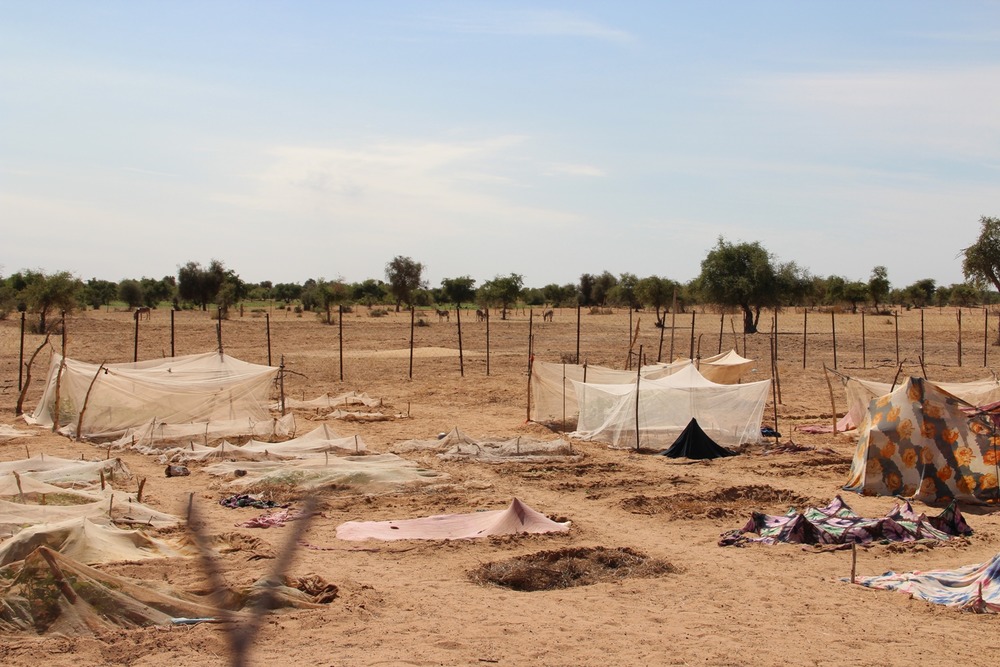 According to FAO’s Kane, it is the Regional Development Committee (CRD) which decides which villages do and do not receive FAO aid - there is nothing that FAO can do to make sure certain villages are included. FAO runs projects in Tagant, Assaa, Hodh el Ghorabi and Guikhimaka to help people reconstitute their stocks, said Kane.

Bah went to the CRD in Kaédi to ask to be included on a list to receive aid, but so far nothing has happened, he said. The CRD delegate in Kaédi would not be interviewed by IRIN.

Diagana Dieydi, a livestock consultant who evaluated the government’s response to livestock breeders in 2012, said the response was 10 times bigger than in other years, but remained quite centralized, so in many cases it was hard for pastoralists in some rural areas to get onto the list. “The lists are not always well done,” he told IRIN.

Building resilience in these villages is possible by making health care more accessible; building better surveillance, early warning and response systems; setting up real crisis contingency plans; increasing cash transfers; improving water and health services to boost children’s nutrition; encouraging families to stock up food; and by setting up targeted veterinary programmes for animals, according to analysts who have written several reports, including Pathways to Resilience in the Sahel.

All this is relevant only over the long-term, and only if development actors get involved, say aid workers - rather than emergency donors with their six-month to one-year funding cycles.

ACF-Spain has a five-year programme to build resilience in selected villages across Gorgol and Guidimakha regions but ACF’s Flament says building up resilience in such a shock-affected region is too much to hope for in the short-term. “What I can say is that we have helped to avoid the mass exodus of males that occurs in these villages each year.”

Another positive impact of the ACF project is that malnutrition levels in 2012 were on a par with previous years instead of being much higher, as one might have expected them to be given the extent of the crisis. As Peter Gubbels author of the Pathways to Resilience report put it: “If there is a drought, and the rate of child malnutrition doesn’t rise, that really would be a sign of resilience.”

Villagers across Gorgol and Guidimakha regions told IRIN that social networks have broken down in many villages because all the men have left. In Wompou in Guidimakha, the village usually empties of men, but this year it did not, said six-year-old Yacine Mint Dew. Villagers were given $140 every three months, as well as other help in nutrition, agriculture and market gardening.

The kinds of programmes being run in the region “have strengthened the resilience of some households to resist external shocks, but they remain fragile,” said Aart van Den Heide, a European Union consultant in Mauritania. “It just takes one year of drought and the men will abandon their villages all over again, in order to survive,” he said.