Join us this Monday for an online conversation
ZARZIS

Two years after fleeing the civil war in Libya, hundreds of sub-Saharan African and Arab refugees, most of them ex-migrant workers in Libya, are still holed up in a camp on the Tunisian side of the border.

Choucha camp, 5km inside Tunisia, is run by the UN Refugee Agency (UNHCR) and at one time had nearly 20,000 residents, around half of them were Bangladeshis who had been working in Libya when the war started and fled to Tunisia on the way home.

Several thousand residents though were from East Africa, and had no wish to return home. In 2011 and 2012 UNHCR processed 3,543 asylum claims in Choucha; of these, 3,009 persons were recognized as refugees.

The camp now has 1,357 residents (1,145 refugees and asylum seekers, plus 212 classed as migrants after their asylum applications were rejected) from 13 different countries - mainly Somalia, Sudan, Eritrea, Ethiopia and Chad - and is set to close in June.

Some 890 camp refugees have already been accepted for resettlement by 14 countries (USA and Norway are the leading hosts) as part of a Global Resettlement Solidarity Initiative launched in 2011 and are awaiting their departure date.

But around 400 refugees from the camp, a few of whom now live in nearby towns, have not yet been accepted by any country and are in limbo (in French).

Choucha has seen violent protests by residents waiting for resettlement.

“Security is terrible here, the refugees are not happy”, a young Chadian man who used to live in the camp

When IRIN tried to visit the camp on 11 January, the road from Zarzis to Ben Gardane (the town on the way to Choucha) was blocked.

The Tunisian army was sent to the area in December after a wave of protests relating to the closure of the border with Libya. The Libyan government decided to close the border after receiving complaints that its citizens were being attacked in Tunisia.

According to local authorities and residents, a large part of the cross-border smuggling trade is run from Ben Gardane, which is close to the camp. Basic products, such as milk, are in high demand in Libya and locals say the trafficking of goods from Tunisia is on the rise.

The border was reopened last week but insecurity in the region makes it a difficult place for refugees to live and humanitarian agencies to work. Aid workers say tension is high.

The recent disturbances blocked UNHCR access to the camp for nearly a week at the beginning of January, with only medical teams being allowed in.

Since the camp was set up in 2011, it has seen protests, fires and two cases of refugees arrested for smuggling arms.

A French researcher who recently visited told IRIN the refugees were living in difficult conditions.

“Security is terrible here, the refugees are not happy”, said a young Chadian man who used to live in the camp.

The challenge UNHCR faces is closing the camp while not abandoning the remaining 400 residents, most of them young male migrants formerly in Libya who fear that if they return they will be accused of having been pro-Gaddafi mercenaries.

Some of those refugees rejected for resettlement will be integrated locally; first, they will receive financial help for moving, and renting flats in urban areas (Zarzis, Ben Gardeme, Medenine), then vocational training will be offered and microcredit for enterprises, according to Elizabeth Eyster, UNHCR's deputy representative in Tunis.

“We received a big donation [600,000 euros] from the German government to assist with the local settlement of these 400 refugees in Tunisia”, said Eyster

Their legal status in Tunisia, however, will remain uncertain. They will not be able to have formal jobs or receive any welfare benefits.

Youth employment for Tunisians is already an issue, and those with UNHCR refugee status face uncertain rights because of the lack of a national asylum system - something absent in every country in North Africa.

“Our biggest challenge is the legal status now. A new asylum law was drafted, but it requires political will to be approved and implemented by the government,” said Eyster.

The new Tunisian government, elected in December 2011, is drafting the constitution and only recently scheduled presidential and parliamentary elections for June 2013, after two previous postponements.

While the chapter on Libyan civil war refugees may be drawing to a close, the challenge of migration and refugee provision remains an issue for the Tunisian government. 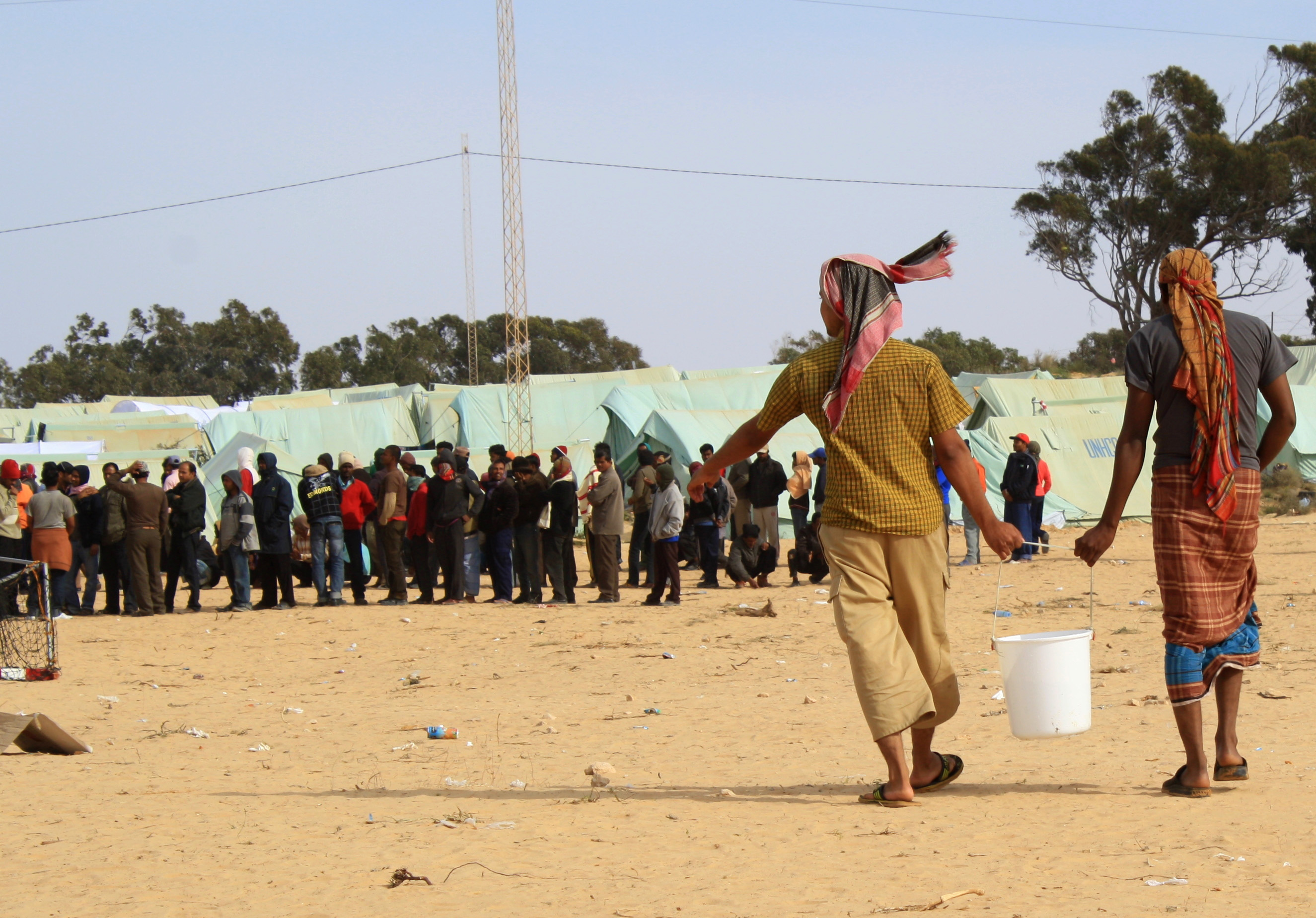 Aid workers say those refugees from Choucha who have not been resettled may try and illegally cross the Mediterranean Sea.

Close to the Italian coast, Tunisia is a traditional gateway for Africans to Europe.

“My destination was Europe. I thought I was in Italy when we got here in Tunisia,” said Rahel*, a refugee from Eritrea, who lives near Choucha camp in Zarzis.

Rahel was recognized as a refugee by UNHCR in Tunisia, but she does not want to stay in the country. “I’m finding difficulty to find a job here. People are not bad, but I want to keep [going on] my journey and go to Europe. I want to make money there, have a better life and bring my other children there too,” she explained.

“Boat arrivals are a huge challenge. We are setting up a partnership with the Tunisian Red Crescent for a reception centre and screening of people coming to Tunisia,” Mathilde Tiberghien, a protection officer with UNHCR in Zarzis, told IRIN.

In September, a boat with 154 passengers was rescued by the Tunisian coastguard and 50 people claimed they were refugees. “They were hosted in Zarzis and then moved to Medenine. We didn’t want to take them to Choucha because this was supposed to be a transit camp,” said Tiberghien.