More people from the Horn of Africa region, especially Ethiopia and Somalia, are crossing international borders as irregular migrants - lacking official documentation or approval - drawn by the promise of a better life in the Arabian Peninsula.

“A growing number of Ethiopians opt to undergo a perilous journey through the Gulf of Aden, hoping to get to the Middle East via Yemen,” Demissew Bizuwerk, a communication officer for the International Organization for Migration (IOM) in Ethiopia, told IRIN.

“A significant proportion of these migrants travel with little or no information about what they would be encountering, and they are, in one way or the other, misled, mistreated and often abused,” he said.

The Obock area in northern Djibouti is a popular transit point for irregular migrants heading to Yemen, who travel there from points on the Ethiopian and Somali borders.

"Some people don’t know that there is a sea between Djibouti and Yemen, that it is deep, that the boats they may travel on are not the best and that they are overcrowded"

“Earlier, there were less security controls, and people would cross through Tadjourah [north central Djibouti] to Obock, but now migrants tend to avoid the towns. It is becoming very difficult to determine their number now with police raids and arrests,” Bakary Doumbia, the IOM chief of mission in Djibouti, told IRIN. “Some arrive in the afternoon and cross at night; a good part of the journey is done far from towns at night.”

When possible, IOM tries to sensitize irregular migrants about the risks they face. “Initially, when some people travel, they don’t know what to expect; when they face desert conditions here [in Djibouti], they realize it can be hard,” said Doumbia.

“We explain to them possible human rights abuses they may encounter. We explain the existence of the sea. Some people don’t know that there is a sea between Djibouti and Yemen, that it is deep, that the boats they may travel on are not the best and that they are overcrowded. We also inform them of the regular migration channels and networks.”

Regular migration may include official permission and documentation and take the form of a streamlined visa application process.

The scarcity of economic opportunities is a major factor fuelling migration from Ethiopia, according to the DRC/RMMS report. Economic migrants from Ethiopia often head to Saudi Arabia and beyond, some regularly, some irregularly.

“Distinguishing between regular and irregular migrants is not very informative as the lines between the two are blurred. A better distinction is between migrants with the resources and connections to exploit the opportunities offered by corruption, as well as the possibility of moving between regularity and irregularity, and those migrants who, due to their social and economic vulnerability, are simply exploited by these same forces,” the report says.

The largest and most vulnerable group of Ethiopian migrants are those with no resources, who travel to Yemen by sea and enter the country illegally.

Arrival in Yemen, which is facing a humanitarian crisis, presents a slew of problems.

The migrants are often smuggled, trafficked or subjected to mental and physical torture throughout their hazardous journey, which increases their vulnerability, says Erich Ogoso, public information and advocacy officer at the UN Office for the Coordination of Humanitarian Affairs (OCHA) in Sana'a, Yemen. 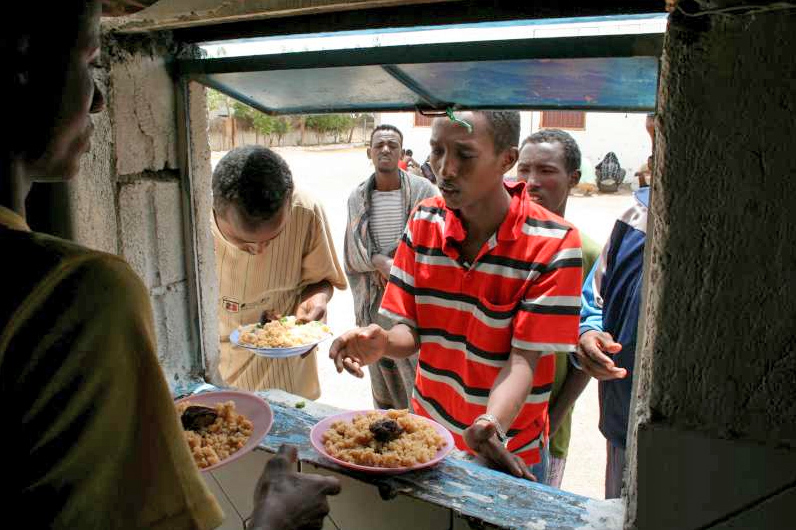 “By the time they reach Yemen, they are in need of humanitarian assistance. Most are economic migrants who end up placing a huge burden upon their host communities,” Ogoso said.

The majority of the migrants live in cities, especially Aden and the capital Sana'a, stretching the limited facilities and services available. Others try to continue to Saudi Arabia in search of better opportunities, but many end up stranded and destitute, he said.

In a briefing note on 11 December, Nicoletta Giordano, IOM’s chief of mission in Yemen, highlighted the plight of vulnerable migrants in and around the northwestern town of Haradh. “They include increasing numbers of single women, unaccompanied minors and elderly and sick migrants who are desperate for a way out of what has become a horrendous situation on the Yemeni side of the Saudi Arabian border,” the note says.

IOM medical staff in Haradh reported widespread health problems among migrants due to insufficient food, poor sanitation and lack of shelter. Casualties from gunshots and landmines are also rising, they indicated. Haradh‘s morgue had exceeded its capacity with bodies of migrants.

The DRC/RMMS report noted that “many Ethiopian migrants [in Yemen] face severe human right abuses that have not been systematically investigated,” adding that “kidnap, torture, sexual violence, abduction and extortion are becoming widespread and frequent hazards, sometimes lethal, for migrants in transit to the Gulf States”.

Back in Djibouti, IOM’s Doumbia called for sensitizing migrants on the risks of irregular migration in their places of origin “because migrants do not come from here [Djibouti], 90 percent are from Ethiopia.”

In Ethiopia, IOM is working with the government at the federal, regional and local levels to create awareness and support livelihoods for those prone to irregular migration. IOM is also supporting capacity building for relevant government bodies.

In close collaboration with regional authorities, rapid market assessments are carried out to determine locally viable income-generating activities, such as raising goats, sheep or poultry or farming vegetables.

Since 2010, IOM has helped at least 9,500 destitute Ethiopian migrants leave Yemen. Hundreds of people have lost their lives crossing the Gulf of Aden; on 18 December, up to 55 people died when a boat carrying migrants capsized off the coast of Somalia.