Following a spate of increasingly violent attacks by the Boko Haram “terrorist” group in August, the Nigerian government set up a committee to outline the best way to tackle it. Released on 26 September, the committee's report strongly urged dialogue and negotiation, though this has previously been rejected by Boko Haram sect members. The government is currently meeting to decide its approach, which it will set out in an upcoming White Paper, according to Vice-President Namadi Sambo.

The following is a chronology of attacks by Boko Haram (BH) since 2003.

3 October 2011: Three killed in BH attacks on Baga market in Maiduguri, Borno State. The victims included a tea-seller, a drug store owner and a passer-by.

1 October 2011: A butcher and his assistant are killed by BH gunmen at Baga market in Maiduguri in a targeted killing. In a separate incident, three people are killed in a shoot-out following BH bomb and shooting attacks on a military patrol vehicle delivering food to soldiers at a checkpoint in Maiduguri. All three victims are civilians.

17 September 2011: Babakura Fugu, brother-in-law to slain BH leader Mohammed Yusuf, is shot dead outside his house in Maiduguri by two members of the sect, two days after attending a peace meeting with Nigeria’s ex-President Olusegun Obasanjo in the city.

13 September 2011: Four soldiers shot and wounded in an ambush by BH members in Maiduguri shortly after the arrest of 15 sect members in military raids on BH hideouts in the city.

12 September 2011: Seven men, including four policemen, are killed by BH gunmen in bomb and shooting attacks on a police station and a bank in Misau, Bauchi State. The attackers rob the bank.

4 September 2011: Muslim cleric Malam Dala shot dead by two BH members outside his home in the Zinnari area of Maiduguri.

1 September 2011: A shootout between BH gunmen and soldiers in Song, Adamawa State, kills one sect members while another is injured and captured.

27 June 2011: BH’s gun and bomb attack on a beer garden in Maiduguri leaves at least 25 dead and dozens injured.

20 June 2011: Seven people including five policemen killed in gun and bomb attacks on a police station and a bank in Kankara, Katsina State.

7 June 2011: Attacks on a church and two police posts in Maiduguri, blamed on the sect, leave at least 14 dead.

29 May 2011: Three bombs rip through a beer garden in a military barracks in the northern city of Bauchi, killing 13 and wounding 33. BH claims responsibility.

27 May 2011: A group of around 70 suspected BH gunmen kill eight people including four policemen in simultaneous gun and bomb attacks on a police station, a police barracks and a bank in Damboa, Borno State, near the border with Chad.

24 and 27 December 2010: A series of attacks claimed by BH in the central city of Jos and Maiduguri kill at least 86.

7 September 2010: A group of BH gunmen free over 700 inmates including around 100 sect members from a prison in Bauchi. Four people including a soldier, one policeman and two residents were killed in the raid. 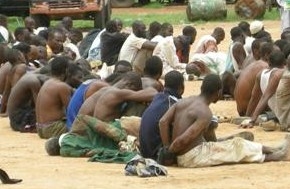 26 July 2009: BH launches a short-lived uprising in parts of the north, which is quelled by a military crackdown that leaves more than 800 dead - mostly sect members, including BH leader Mohammed Yusuf. A mosque in the capital of Borno State (Maiduguri) that served as a sect headquarters is burnt down.

2005-2008 BH went underground, reducing its attacks and focusing on recruiting new members and shoring up resources.

10 October 2004: BH gunmen attack a convoy of 60 policemen in an ambush near the town of Kala-Balge on the border with Chad. The militants took 12 policemen hostage and police authorities presumed they were killed by the gunmen because all attempts to trace them failed.

23 September 2004: BH militia attack police stations in the towns of Gwoza and Bama in Borno State, killing four policemen and two civilians. They took to the Mandara Mountains along the Nigeria-Cameroon border. Soldiers and two gunships were deployed in the mountains and after two days of battle 27 sect members were killed while the rest slipped away. Five BH members who crossed into Cameroon were arrested by Cameroonian gendarmes who had been alerted by Nigerian authorities. The five were deported and handed over to Nigerian authorities.

7 January 2004: Seven members of BH killed and three others arrested by a team of local vigilantes outside the town of Damboa, Borno State, near border with Chad. Bags containing AK-47 rifles were recovered from sect members.

June 2004: Four members of BH were killed by prison guards in a foiled jail break in Yobe State capital Damaturu.

23-31 December 2003: A group of about 200 BH militants launched attacks on police stations in the towns of Kanamma and Geidam in Yobe State from their enclave outside Kanamma on the Nigerian border with Niger. BH killed several policemen and requisitioned police weapons and vehicles. Following the deployment of military troops to contain the insurrection, 18 BH members were killed, and a number arrested.