"We know why you're in South Africa - Life in Zimbabwe is murder these days", a billboard greets Zimbabwean immigrants in South Africa's border town of Musina; it also asks them to return to vote in next month's election, but so far the people traffic has remained solidly one-way.

January was a busy month for Musina's authorities. After spending Christmas with their families, Zimbabwean migrants returned to South Africa to earn the money that will sustain their relatives back home. On some days the police were deporting up to 500 people who had crossed the border illegally.

By February that figure had dropped to 100 a day, but represented just a proportion of Zimbabweans expelled from South Africa. The International Office for Migration (IOM), which runs a reception centre for deportees at the Zimbabwean border town of Beitbridge, helps around 10,000 people each month. That does not include those who decline the assistance, preferring to attempt another crossing immediately.

In recent weeks the summer rains have swollen the Limpopo River, which demarcates the border, making it too dangerous to cross. Instead, some people have resorted to hopping over the fencing of the footbridge that spans the river, scooting down a concrete slope while ignoring the warning shouts of the border guards, and then disappearing into the bush to lie low until the regular patrols have passed. The final stage, when things are quiet, is to get through three rows of barbed wire fencing.

Peter Ncube*, a Zimbabwean, works as a transporter, helping people across the border. When the river is low he uses a makeshift boat, guided by two people wading through the water. "The people are scared but there is no [other] solution. Grandmothers, grandfathers, mothers, fathers and children, they [want] to come to South Africa to look for a job ... so they can support their families."

He has seen a steady increase in the number of migrants crossing as Zimbabwe's economy has soured, which is good business for him. Ncube has been living in Musina for 10 years and has family on both sides of the border. The money he earns - up to US$50 per border-crosser - goes to his children who are still in Zimbabwe. "I help someone, he pays me something - at least I can manage to support my family as well."

Most migrants want to reach Johannesburg, South Africa's economic hub. From the border they continue on foot, heading for designated pickup points where minibus-taxis will take them on the next stage of the journey.

To avoid the border patrols, they often end up on private land. Jan Knoetze owns a farm near the border and frequently encounters "hungry, upset and rather destitute" Zimbabweans on his property. "I have seen them drink hot water from a pipe - they wouldn't even let the water cool down, they drink the hot water as it is," he told IRIN.

Unlike some farmers, Knoetze sees little point in alerting the police, as those who are deported often come straight back across the border. Musina's police chief, Superintendent Maggy Mathebula, sees it differently: "It is true that they keep on coming back. If we deport a truck in the morning, in the afternoon half of the people who were deported in the morning are re-arrested again. But it's our duty, we have to do it, again and again."

Those picked up are held at Musina's detention centre, where they have a chance to eat and wash before being repatriated. Women were clutching the loaves of bread they had been given by the centre when IRIN visited.

"This here is nice, because now I'm taking some bread [home] to eat," commented Esther Sibanda, who said she was voluntarily returning to Zimbabwe to vote in the 29 March elections. When the deportees reach the IOM's reception centre across the border, they are offered further assistance in the form of food packs, health checks and transport to their hometowns. 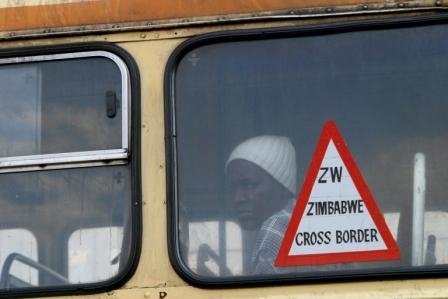 Miriam Gumbo, 22, waiting in line with other women to board the deportation truck, all carrying their belongings in plastic holdalls, their babies tied to their backs, vowed to be back. She had come across the river with her husband and their 10-month-old twins, but was arrested after crossing the fence.

It was not her first attempt: she came to South Africa in 2004 and was deported in 2007, but Zimbabwe offered her no future. "There is no food to eat and nowhere to sleep. It's so hard with these young children." She and her husband had been trying to reach Johannesburg to find work and were not deterred by the latest setback. "I will try to come again. I am not afraid, because there is [no life] in Zimbabwe."

In January the International Monetary Fund estimated Zimbabwe's inflation rate at 100,000 percent and still rising, and only two out of 10 people are employed. Maternal mortality rates, and infant and under-five deaths are all above threshold levels that should trigger international concern. Although nutrition levels are not the lowest in the region, only in Zimbabwe are the trends in "stunting" and "underweight" deteriorating.

Many "undocumented migrants" who manage to avoid arrest head for a concrete tunnel under the highway to Johannesburg, just south of Musina. It is known as a good place to hide and await the first light of day, when minibus-taxis pull over, offering onward transport.

The entrance to the tunnel is marked by a pair of old abandoned shoes and food packaging strewn about. The walls are used as a giant message board: "Almighty God, bless my journey to Joburg, in the name of Jesus. Amen", dated 5 October 2007, or "Chikoko 'Big Fish' - leading a journey into the unknown." The messages also impart information, including a sketch of a Pioneer Transport bus, the preferred service for many migrants.

When asked whether the police were overwhelmed by the number of people crossing the border, Mathebula replied, "They are keeping us busy. We're afraid that if this ends we won't have work anymore."

In the meantime, Musina's authorities are building a huge new police station, and a detention centre that will hold 1,500 people, almost double the current number.

* Some names have been changed