Humanitarian organisations are struggling to keep pace with the increasing needs of civilians as conflict between the government and pro-independence groups escalates in Cameroon’s anglophone regions.

Limited access to those driven from their homes, low levels of donor funding, and what aid workers have described as government “obstruction” means the majority of the 1.3 million people affected by the violence cannot be reached.

Since November 2019, there has been a surge in violence in the Northwest and Southwest regions – referred to collectively by pro-independence fighters as the Southern Cameroons or the Republic of Ambazonia.

Nearly 900,000 people have been made homeless, and an additional 60,000 have fled into neighbouring Nigeria. The four-year conflict, triggered by the perceived marginalisation of the region from majority French-speaking Cameroon, has left at least 3,000 dead.

Read more → How an ‘execution-style’ massacre unfolded in Cameroon

Needs include food, shelter, and psychosocial support as the government forces and pro-independence fighters routinely torch homes and, increasingly, entire villages, forcing people into the bush. 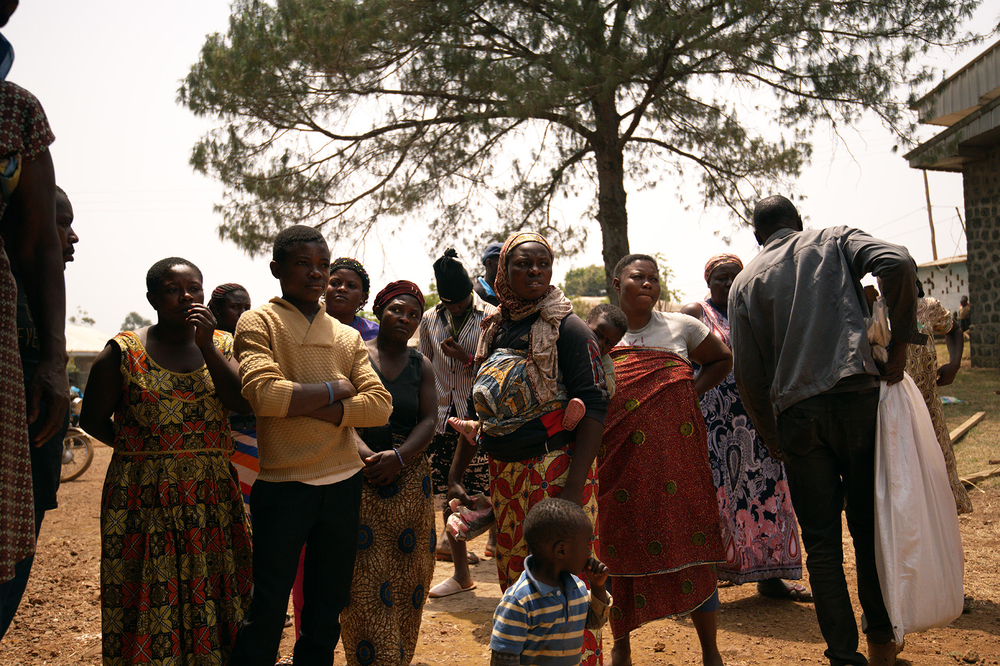 Jess Craig/TNH
Residents of Bali waited for shelter kits from the UN after their homes were torched.

Over 600,000 children have been unable to regularly attend school following an education boycott ordered by the separatists to protest the creeping use of French in class and attacks on schools, teachers, and students to enforce the ban. As a result, just 19 percent of primary and secondary schools remain open in the conflict region.

The UN’s children’s agency, UNICEF, estimates that only 34 percent of health facilities are operating, causing a dip in life-saving immunisation and nutrition services.

Despite the humanitarian needs, the UN and its local partners were able to reach only 40 percent of affected civilians in 2019, Mobido Traore, head of the UN’s aid coordination body, OCHA, told The New Humanitarian.

The insecurity, particularly in the Northwest – the centre of much of the violence – has had a significant impact on humanitarian operations.

In January, seven aid workers from two local NGOs – COMINSUD and the Martin Luther King Jr. Memorial Foundation – were kidnapped by pro-independence fighters. Although all staff were later released, the abductions resulted in several organisations restricting their area of operations.

Government security forces have also failed to respect humanitarian space. On 21 February, soldiers entered the St. Mary Soledad Hospital campus, a health facility supported by the medical charity Médecins Sans Frontières in the town of Bamenda, and shot and killed a civilian driver in his vehicle.

Aid agencies have increasingly relied on community and religious leaders to draw displaced civilians from their hiding places in the bush and to assemble them in “safe zones”, such as religious centres and former schools, where they can receive assistance.

But the military has raided “safe zones” and killed and arrested the displaced, and those who assisted in organising the aid distributions, according to internal incident reports by local aid NGOs seen by TNH, press statements, and interviews with several eyewitnesses and victims.

In June, it established Humanitarian Coordinating Centres in Bamenda and Buea – the capitals of the Northwest and Southwest regions – to assess incoming aid, provide guidance on distribution, and ensure traceability, government officials told local news media at the time.

All local and international aid organisations – including the UN – are required to apply to the coordinating centres for permission to carry out needs assessments and aid deliveries. Food and non-food aid must be hand inspected at the centres before delivery to beneficiaries.

“The process for vetting humanitarian assistance in Bamenda and Buea has been in place just to place more burden on humanitarian actors,” Traore said.

Local aid workers who asked to remain anonymous over safety concerns described the time-consuming procedures as a “crackdown on humanitarian organisations”.

Last week, the government moved the vetting process from the coordinating centres to the governor’s office in Bamenda.

It’s a step that not only politicises aid work, but will result in a “significant delay in aid reaching beneficiaries,” Traore said.

The governor’s office did not respond to requests from TNH to comment on the most recent developments.

Government officials have also renewed their accusations that human rights and aid groups are colluding with the pro-independence groups, supplying them with weapons, and spreading false information that implicate the security forces in atrocities.

“Many NGOs have clearly revealed themselves as enemies of our country.”

“Many NGOs have clearly revealed themselves as enemies of our country,” Nji said. They have “become laboratories of fake reports with the sole objective to tarnish the image of the country’s defence and security forces.”

The government was particularly incensed by the reports of a massacre in the village of Ngarbuh on 14 February, in which the security forces and allied militia were accused of killing at least 21 civilians. The UN demanded an impartial inquiry into the incident.

Rights groups and aid organisations have all denied Nji’s accusations.

“The government is trying to jeopardise our work and tarnish our image,” Traore said. “They don’t want external eyes there to see what is happening.”

A persistent lack of funding has also hamstrung the humanitarian response. Donors have provided just over 40 percent of Cameroon's aid appeal, but in the Northwest and Southwest regions, the figure is far lower – just 18 percent of the budget has been financed.

As a consequence, the UN has only “limited capacity to respond timely to increasing needs,” said Traore.

A high staff turnover also means the UN has struggled to build trust with communities and representatives of both sides of the conflict, noted an OCHA official, who asked to remain anonymous.

Another UN staff member was more critical. “This situation is unique because [this UN operation] is not very functional”, the person said, referring to the UN’s inability to provide assistance to the majority of those in need. “The UN’s reputation is plummeting. There is a failure to deliver.”

As the conflict widens in 2020, the UN predicts its funding needs will rise. Local and international aid groups are working to build capacity, especially in the troubled Northwest region, but it is an uphill struggle, they say.

“It is not a good situation,” one local aid worker told TNH. “It is not looking good for us.”