Beyond the bang-bang: Reporting from the front lines of peace. This article is part of our peacebuilding coverage, reporting on how atrocities can be prevented, how societies can be made more resilient, and how peace can be sustainably built.
WASHINGTON D.C.

After three years of conflict, tentative ceasefire talks are underway between the Cameroon government and secessionist fighters demanding independence for the country’s two anglophone regions.

Cameroon is a majority French-speaking country, and its Northwest and Southwest regions complain that they have been deliberately marginalised by the government in Yaounde. What began as a protest movement in 2016 calling for federalism, degenerated into fighting and a demand for full independence after the government clamped down on protest leaders.

The conflict has since killed more than 3,000 people, forced over 900,000 people from their homes, and kept around 800,000 children out of school. In the violence, the security forces have been accused of widespread human right abuses – as have, to a lesser extent, the separatist forces fighting for an independent “Ambazonia”.

Talks have now begun between the government and a key separatist faction headed by imprisoned leader, Sisiku Julius AyukTabe. But those ceasefire discussions have been condemned by other separatists in Cameroon and abroad, who argue that Sisiku does not have a mandate to negotiate.

Some secessionists argue that the dialogue is another example of Cameroon “picking and choosing” who gets to speak for “Ambazonians.”

Meanwhile the government, sensitive to any public notion of deal-making, has denied talks are underway – although affirmed this week it was ready to seek "peaceful solutions".

This briefing provides a who’s who of a deeply divided independence movement as pressure mounts on all sides to end the war.

Who are the secessionist groups?

The secessionist forces number anywhere between 2,000 and 4,000 armed fighters. They can be divided into two rival so-called Ambazonia interim governments (referred to as “IGs”).

One is led by Sisiku, a former university administrator and engineer, who is currently facing a life sentence on terrorism and secession charges. The second is headed by Samuel Ikome Sako, a US-based former pastor. “IG Sisiku” is seen locally as the stronger of the two wings.

The split in the movement followed the arrest of Sisiku in Nigeria, along with nine other senior officials – the so-called “Nera 10” (named after the hotel in which they were staying) – and their extradition to Cameroon in January 2018.

The friction between the two camps largely plays out in the diaspora – where nearly all the secessionist leaders are based – but has increasingly led to clashes among their men in Cameroon.

Each IG is an umbrella group for a range of other factions. As Cameroon's war continues, a key question is how much control the diaspora-based leadership has over individual commanders and fighters on the ground.

The division has complicated humanitarian efforts, with aid workers not knowing which group they must seek permission from to access communities in need.

On Monday, international NGOs released a joint statement reiterating that they provided aid to “all civilian populations affected by the ongoing crisis based on need and without discrimination”.

Adding to the confusion are the militias not affiliated to either camp, as well as the so-called “Fake Amba” – local vigilantes accused of being in the pay of the government. 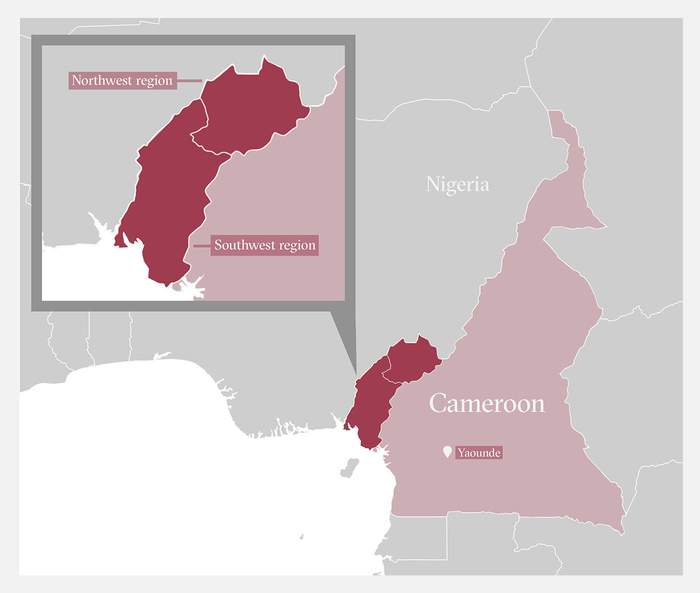 Following Sisiku’s arrest, Sako was selected as acting interim president of the original IG in a move condemned by some for a lack of transparency. Tensions between the two men reached boiling point in early 2019 when Sisiku announced he was “dissolving” his organisation.

Sako hit back and said Sisiku had been impeached – creating the two separate groups, known as “IG Sisiku” and “IG Sako.”

While divisions within the separatist movement have existed since the 1980s, this rupture has proven far more significant than others. Cash is a factor, with control over money raised from donations abroad – including the so-called “War Draft” – and kidnappings and extortion in Cameroon proving a lucrative revenue stream.

In 2019, groups aligned with IG Sako coalesced under a new umbrella, the Ambazonia Coalition Team (ACT). Its main military asset is Lekeaka Oliver, popularly known as the “field marshal of Lebialem”, who has proved an able commander. It also includes the Southern Cameroons Defense Forces (SOCADEF), an armed group led by Ebenezer Akwanga.

ACT’s civilian activists are mostly US-based. They include Boh Herbert, who heads the Movement for the Restoration of the Independence of Southern Cameroons, and Kometa Elvis of the Southern Cameroons National Council, among others.

IG Sisiku, on the other hand, is aligned with the Ambazonia Governing Council (AGovC) – one of the largest opposition groups – led by Norway-based Cho Lucas Ayaba. It has an armed wing, the Ambazonia Defence Forces (ADF), which is active across both anglophone regions.

Political activist Mark Bareta, currently in Belgium, told The New Humanitarian that the alliance between IG Sisiku and AGovC, formalised in August 2019, “solidifies President Sisiku as the face of the revolution [and shows he has] one of the strong men of the revolution, Cho Lucas Ayaba, with him.”

Calls for a ceasefire and an end to the war have been longstanding. An early step towards dialogue was dubbed the “Swiss process” – an attempt to unify the secessionists as a precursor to talks with Yaounde.

The negotiations were facilitated by the Geneva-based Center for Humanitarian Dialogue – a conflict mediation NGO. While the groups in ACT are committed to the process, the IG Sisiku alliance refused to participate, questioning the integrity of the negotiations and the Cameroon government's commitment to peace. No meetings have taken place since late 2019.

Sisiku, from his prison in Yaounde, strongly opposed the “Swiss process” and jokingly referred to it as the “Swiss chocolate talks.” Ayaba of the AGovC described the dialogue as a “Trojan horse” aimed at handing victory to the government.

So, the involvement of Sisiku and a handful of his men now in direct talks with the Cameroon authorities is all the more surprising. The step is seen as the result of both the resilience of the Ambazonia movement and the impact of sustained international pressure on the Cameroonian government.

Read more → How an ‘execution-style’ massacre unfolded in Cameroon

The two rounds of “pre-talks” – the last reportedly on 2 July – have been held outside the Kondengui Central Prison where Sisiku is being held and are seen as “confidence-building” steps.

“We have given Cameroon a list of action items, and the ball is now in their court,” said IG Sisiku vice president Dabney Yerima, speaking to TNH from The Netherlands.

The demands include demilitarisation of the anglophone regions, the release of prisoners, and an amnesty to enable leaders in the diaspora to return home. Ayaba, the head of AGovC, has indicated he will abide by a ceasefire if the government agrees to one.

“We have given Cameroon a list of action items, and the ball is now in their court.”

“Our commitment to end the war and bloodshed is evident, but we hope Cameroon shares that vision,” said Yerima.

What’s happening on the ground?

ACT remains united on their preference for the “Swiss process” – and their opposition to Sisiku’s initiative. But divisions do regularly emerge within the coalition, usually between those seen as relatively new to the struggle and the veteran secessionists.

With leaders based abroad, who do not coordinate particularly well, conflicting policy positions are a perennial problem – which has a direct impact on daily life in the English-speaking regions.

The separatists have maintained a long-running school boycott, arguing that the education system is biased against anglophone students. They have also repeatedly instituted so-called lockdowns – demanding a halt to all business activity.

Read more → Briefing: Cameroon's intensifying conflict and what it means for civilians

Last year, Chris Anu, the Texas-based communications secretary of IG Sako – who fronts a Facebook news broadcast – warned that an indefinite lockdown would be implemented unless all political leaders are released.

Boh Herbert, the ACT activist, tweeted that the threat was “unacceptable” and “such lockdowns that are now commonplace in the #AnglophoneCrisis hold civilians hostage and cause grave suffering.”

“Such lockdowns that are now commonplace in the #AnglophoneCrisis hold civilians hostage and cause grave suffering.”

Anu this month also ordered a halt to a reconstruction initiative by the UN Development Programme aimed at repairing homes, typically destroyed by the security forces. He argued that the money was being “stolen” by the government.

Differences have also emerged within AGovC and IG Sisiku. Tapang Ivo Tanku, spokesperson of the AGovC’s armed wing, the ADF, said last year that anybody not paying a so-called “liberation war tax” would be kidnapped and held for ransom.

AGovC’s political wing and IG Sisiku distanced themselves from that statement, which some described as basic extortion.