Trapped in limbo for years, refugees and asylum seekers in Indonesia say they’re seeing a rash of suicides in immigration detention centres and donor-funded shelters amid warnings of a growing mental health crisis.

At least 13 people have committed suicide since 2014, including four people in the last year, according to refugees and asylum seekers who spoke to The New Humanitarian. This includes a 30-year-old Afghan man who hung himself in December at a facility funded by the UN’s migration agency, IOM, in Banten Province, west of Indonesia’s capital, Jakarta.

“He hung there for a few hours before the police took the body away. Nobody checked on us,” said a refugee living in the same facility, who asked not to be named for fear of repercussions.

Aid groups and refugees themselves describe growing desperation as options narrow for Indonesia’s nearly 14,000 refugees and asylum seekers. Indonesia is typically seen as a transit country rather than a destination for asylum seekers – half of whom come from Afghanistan. Others left countries like Somalia, Myanmar, Iraq, and Sudan.

Many fled conflict to come to the Southeast Asian nation, hoping to be resettled in safe countries. Instead, most have found themselves stuck in stasis for years – unable to be resettled, unwilling to return home, and unable to make a new life in Indonesia.

“He hung there for a few hours before the police took the body away. Nobody checked on us.”

Hassan Ramazan, a 42-year-old asylum seeker, said a fellow Afghan living at his makeshift shelter in West Jakarta was sent to a hospital last month after complaining that his food was poisonous and that someone was trying to kill him.

“He has children and parents back in Afghanistan,” Ramazan said. “Why is a healthy person, three or four years ago, now losing his [mind]? How can you explain this?”

Indonesia is a snapshot of what the world’s 26 million registered refugees are facing.

The UN’s refugee agency, UNHCR, says some 1.44 million refugees are in urgent need of resettlement to so-called “third countries”. But global resettlement numbers are at their lowest in two decades. Only 22,770 refugees worldwide were resettled in 2020 – a year in which coronavirus restrictions and border closures added even more limits for the world’s refugees, asylum seekers, and migrants.

In Indonesia, roughly 400 people were resettled last year, according to the UNHCR, which warns that “only a small number” will ever have this option. 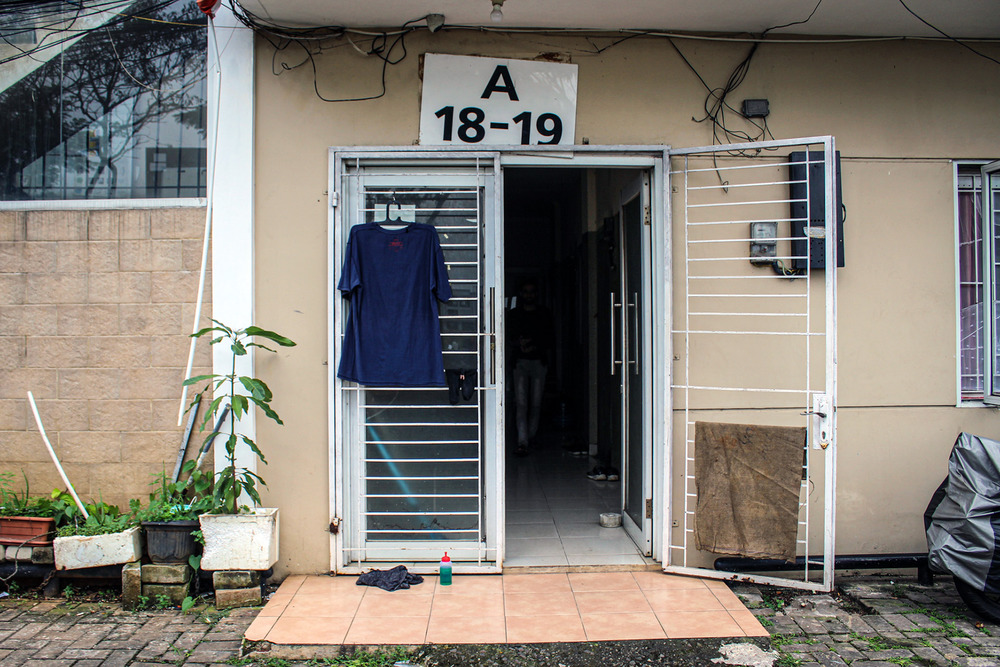 Groups that work with refugees say it highlights the need to find other solutions beyond resettlement – including local integration in countries like Indonesia, and job and education opportunities so that refugees can continue their lives while they wait. But Indonesia bars permanent resettlement, and offers few rights: Refugees cannot work or marry, and have only limited access to education.

Zico Pestalozzi, a campaign coordinator of the Indonesian Civil Society Association for the Protection of Refugee Rights (SUAKA), said the rising number of suicides among refugees is driven by hopelessness and an unclear future.

“The low level of resettlement is exacerbated by the lack of fulfillment of rights in the country of asylum where they now live: Indonesia,” he said.

Today’s backlog is partly a product of Australia’s controversial border policies, which aim to block asylum seekers travelling by boat from ever reaching Australian soil.

Australian funding has helped to step up migration enforcement and stopped boat departures from Indonesia – including more than $200 million since 2001 to IOM. Australia has banned people arriving by boat – and refugees registered in Indonesia after July 2014 – from ever resettling in Australia. It has also sent thousands to now-closed offshore detention centres in Nauru and Papua New Guinea to have their refugee claims processed.

As Australia shut its doors, refugee and asylum seeker numbers rose in Indonesia – from a population of several hundred through most of the 2000s, to thousands a decade later.

Today, refugees and asylum seekers live in urban areas across Indonesia: Some are held in immigration detention centres; others are in IOM-funded community housing; others are essentially homeless, living on the street or in makeshift shelters.

UNHCR handles refugee registration and asylum claims. IOM says it supports some 7,000 refugees with monthly allowances and other services, while NGOs and community groups also help with basic needs.

However, refugees and asylum seekers say living conditions are dire wherever they end up.

Ramazan’s home in Kalideres, West Jakarta, is an abandoned military post housing more than 230 people in cramped tents. The residents share two toilets. Living like this for so long has taken a toll on refugees’ mental health and driven them to despair, he said.

“Some people have those old phones – the ones whose numbers are registered with the UNHCR’s office – and they go to sleep with the phones on their ears because they are waiting every day and night for a call [for resettlement],” he said. “This waiting hurts. It makes them say, ‘Nothing remains for us’.”

Ramazan fled his native Afghanistan in the 1990s, living in Pakistan for two decades before coming to Indonesia in 2016. His family remains in Pakistan, which hosts some 1.4 million Afghan refugees and at least 500,000 more who are undocumented. The country has periodically pressured Afghan refugees to return home.

“My daughter used to ask her mother, ‘When will father come?’ and her mother would reply, ‘Soon’,” Ramazan said. “Now my daughter does not believe it anymore.”

Asadullah Amiri, a 30-year-old refugee also from Afghanistan who arrived in Indonesia eight years ago, lived in a detention centre for two years before being released into an IOM-funded facility in Makassar, South Sulawesi province.

He said two people in the last year have committed suicide at IOM facilites in Makassar, including an Afghan friend who killed himself last July.

Amiri called the IOM shelters “an open prison”, with curfews and restrictions that, if broken, can get residents sent back to immigration detention centres.

“We are free here but we don’t have freedom,” he said, adding that there continue to be suicide attempts in the shelters. “Life is like hell in Makassar.”

Beyond suicides, refugees and asylum seekers also say they’ve witnessed immigration officials beating or mistreating people in detention centres or in the IOM facilities. Jafar Hossain, a refugee in Pekanbaru on the island of Sumatra, said his cousin died in a detention centre last year after officers allegedly ignored his requests to be taken to a hospital to treat a pain in his head. “No one is helping us,” Hossain said. 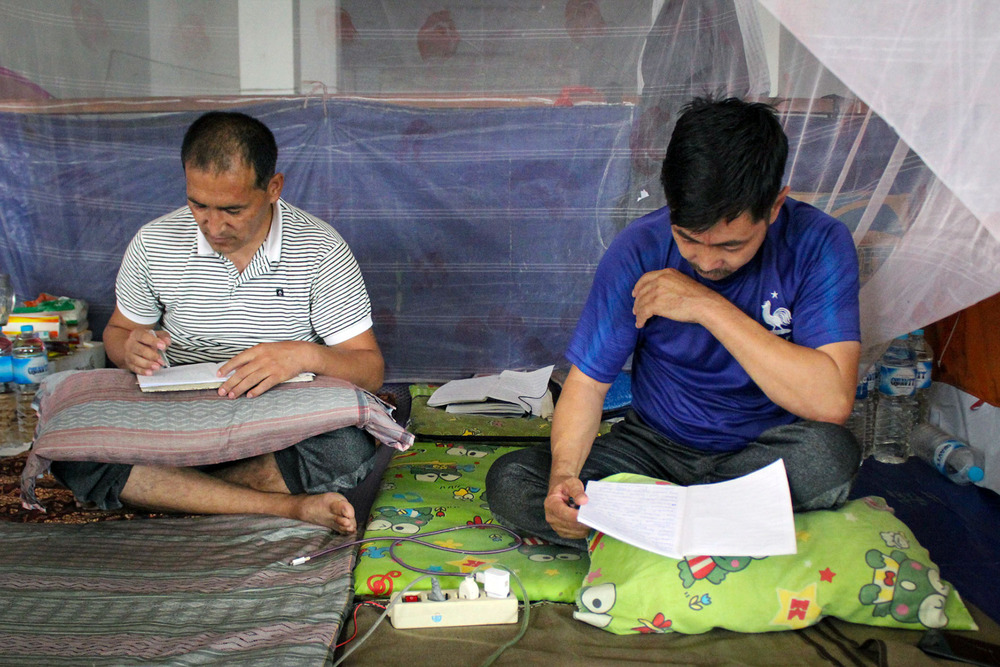 She declined to comment on the number of suicides committed in IOM facilities.

Ann Maymann, the UNHCR’s representative in Indonesia, called the suicides among refugees and asylum seekers “devastating”. She said it highlights the need to boost mental health programmes like counselling – and for longer-term solutions including local integration, and more rights to education, training, or income so that refugees can “live a meaningful life”.

“There are certain things that only a government can do,” Maymann said. International, local, and refugee-led aid groups “cannot fulfill the gaps that are left when refugees are not properly included in the society where they live”.

“We are free here but we don’t have freedom.”

Officials at Indonesia’s Directorate General of Immigration did not respond to requests for comment. A spokesperson told local media in 2019 that the onus is on UNHCR to ensure refugees are resettled or return home. “Immigration is limited to supervising them as foreigners who are in Indonesia,” the spokesperson said.

IOM provides counselling to refugees and asylum seekers, and some 240 people were referred to psychiatrists last December, the organisation’s spokesperson said.

But mental health counselling can only go so far after years spent in limbo, refugees said. Counselling provided by IOM encourages refugees “not to think about the situation”, Amiri said.

“This is almost nine years,” he said. “How can't we think about it?”

As desperation grows, refugees said they want the UNHCR and others to push more forcefully for a resolution – resettlement elsewhere, or staying permanently in Indonesia.

Several refugees and asylum seekers said they would jump at the opportunity to get Indonesian citizenship if it were possible.

“Indonesia is a safe place, so for me, I would take it,” Ramazan said. “Everyone knows that there is no peace in Afghanistan... I cannot go back.”

The UK’s Royal College of Psychiatrists has mental health information in multiple languages, including Pashto (پښتو) and Farsi (فارسی).