A series of government-sponsored community reconciliation efforts in Ethiopia’s western Benishangul-Gumuz region has failed to curb months of ethnic conflict that has claimed hundreds of lives and left more than 100,000 people displaced.

The peace forums are aimed at bridging community divides, but disputes over land ownership and a lack of accounting for brutal tit-for-tat massacres continue to fuel anger in a region long troubled by deep undercurrents of ethno-nationalism.

The reconciliation drives, involving elders and religious leaders, have been held in a number of wards around Gelgel Beles – the capital of the Metekel Zone, the area hardest hit by the violence – but attacks have continued.

The federal government is also trying to restore confidence by creating a new multi-ethnic self-defence militia, but more armed men might not be the right solution, according to Tsegaye Berhanu, a researcher and lecturer at Assosa University in Benishangul-Gumuz.

“Arming unarmed groups is like encouraging revenge, and puts the area into an endless conflict trap,” Berhanu told The New Humanitarian. 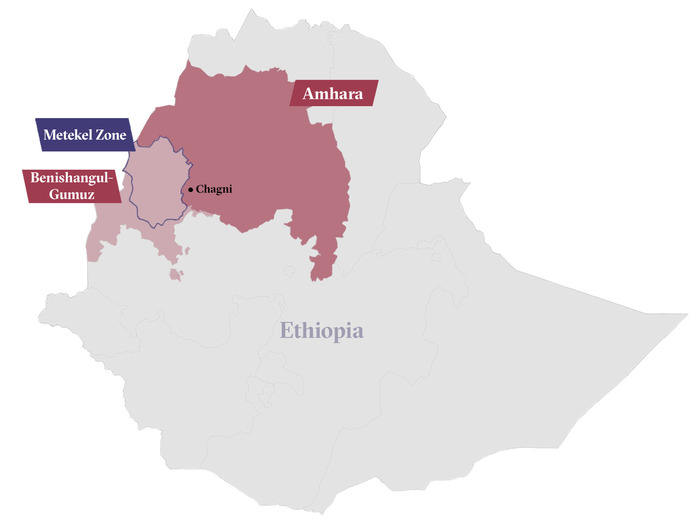 The violence is focused on the countryside. Villages are deserted along the road leading from Metekel to the border with the neighbouring region of Amhara. Crops in the fields have been abandoned or ignited and turned to ash.

The victims of the attacks can be found in the towns of Benishangul-Gumuz and Amhara, where more than 100,000 people shelter in overcrowded, makeshift camps, short of food. Some are hiding in the forests, uncounted and unaided, while several thousand more have crossed into Sudan.

“All my property except the clothes that I am wearing now, I left it all there,” said Workie Bekele, in the Amhara town of Chagni, a few kilometres from the Benishangul-Gumuz border.

She had fled with her eight children, sensing something bad was about to happen. The following day, her village of Musen was attacked. “They killed people using knives, arrows, and guns,” she told TNH, cradling her young son in her arms.

More than 20,000 people are squeezed into the camp in Chagni, close to the town’s centre. It is run by the government with the help of local NGOs, but there are few facilities and the tents are badly overcrowded.

Benishangul-Gumuz is home to several different ethnicities – including Gumuz, Berta, Shinasha, Mao, and Komo – as well as a variety of settler groups, known locally as “outsiders”. Settlers are attracted by the region’s fertile land, but are not granted full local citizenship rights by the regional authority in Ethiopia’s federal system.

Over the years, the influx of ethnic Amharas, Oromos, Tigrayans, and Agaws has grown – and resentment from residents has turned to violence. Amharas are now one of the largest ethnic groups in the region, and, although they can’t technically own land, they have considerable economic and political clout.

Large-scale land acquisitions by both local and foreign investors – authorised by the federal authorities – have increasingly pushed Gumuz off the land. These new agricultural projects have employed seasonal wage labourers migrating from the central highlands of Amhara – many of whom have stayed on, moving into forested land and creating new settlements.

Benishangul-Gumuz is also home to the government’s prestige $5 billion Grand Ethiopian Renaissance Dam. When commissioned, it will be the biggest hydroelectric power plant in Africa – but again it has delivered few of the promised jobs and benefits to locals.

There have been repeated episodes of intercommunal violence over the years. In 2017, clashes between the Gumuz and the Oromo displaced nearly 75,000 people – mainly Oromo – on either side of the regional border. A year later, 21,000 Amharas fled fighting with the Gumuz community in Metekel.

Rising Amhara nationalism has been adding to the tensions. During the famine in the 1980s, many Amhara were resettled here and are now making territorial demands – including for Metekel to be incorporated into Amhara.

Inter-communal relations are also coloured by Benishangul-Gumuz’s own history – it was a zone of slave raiding by the region's more powerful neighbours – and that stigma remains.

Since September, there have been fresh waves of violence against “outsider” communities by heavily armed men, suspected to be Gumuz militia. In a particularly devastating attack in December, more than 200 people – ethnic Amharas, Oromos, and Shinashas – were killed in the village of Bekoji.

“There is a lack of land for agriculture, so [the Amharas] want to take land from Benishangul-Gumuz,” said a human rights activist working with Gumuz refugees who have fled west into Sudan. “The [Gumuz] are only defending themselves.”

The activist, who asked that his name not be used for security reasons, said Gumuz refugees sheltering in Sudan’s Blue Nile state described attacks on their villages by the Amhara militia, federal forces, and fighters of the Oromo Liberation Front-Shene group that operates out of the Oromia region to the south.

They also accused the federal army of trying to block their escape and of arresting Gumuz men on the border.

Additional government troops arrived in Benishangul-Gumuz the day after the Bekoji massacre, and have since arrested several alleged perpetrators of the ongoing violence. Some Gumuz militia have reportedly turned in their weapons in the town of Mandura, a few minutes’ drive from the Amhara region.

But attacks have continued in several parts of Metekel, including in Wombera, Guba, and Dibate. Military escorts are used to transport humanitarian supplies because of the numerous road ambushes on vehicles, and aid agencies have relocated their staff from Gelgel Beles to Chagni in Amhara, which is considered safer.

“In the [Benishangul-Gumuz towns], we are living together,” said Solomon Amche, a young resident of Mandura. “But in the rural area, they are all living scattered [from their villages]. Until peace is secured, they will stay where they are.”

The term ethnic cleansing is frequently uttered here – as in many other regions of Ethiopia where inter-communal violence is threatening the country’s peace. But attacks are usually perpetrated by all sides, feeding into a retaliatory cycle of killings, which are then used as proof of each side’s victimhood.

The violence is not one-sided. “The displacement and the death – the Gumuz are also the victims of this. Especially in Wombera [district], many of my relatives were killed,” said Basha Ali, who works for Metekel’s peace establishment office in Gelgel Beles.

Amhara political parties repeatedly claim that ethnic cleansing is behind the violence in Benishangul-Gumuz, and that accusation is rebroadcast on social media – echo chambers of hate speech and over-simplification – fuelling calls for Amhara military intervention.

In December, Amhara’s security forces – who have supported the federal government’s military action in the northern province of Tigray – said they would seek permission from Addis Ababa to cross into Benishangul-Gumuz if the killings did not stop.

The government is laying the blame for the conflict on “anti-people forces” – accusing its enemies of stirring up discontent. That includes the leadership of the Tigray People’s Liberation Front (TPLF) that Addis Ababa has been battling since November.

“The mastermind is the TPLF,” said Towabeb Mehret, a member of the ruling Prosperity Party in Chagni. “The groups who are benefiting from this [violence] are terrorists getting orders from the TPLF.”

It is increasingly common for Addis Ababa to discern a hidden TPLF hand in problems it encounters around the country. The government has also accused Egypt – long opposed to the GERD, which it regards as an existential threat – of meddling in Benishangul-Gumuz.

The federal government “should not externalise problems and point fingers at political opposition parties”, said Berhanu, the university researcher. “It should try to understand the real causes [of the violence] and address [them].”

Addis Ababa instead sees its new multi-ethnic militia, which is already 9,000-strong, as a necessary step to restoring order and helping develop reconciliation.

But even if a new self-defence group is deployed, many displaced are too scared to go home.

“The neighbours who were eating and drinking with us started to slaughter us,” said a refugee in Chagni who preferred not to give their name. “Living with them is not safe anymore.”