Listen to this article:
GRAN CANARIA

The number of asylum seekers and migrants crossing the treacherous Atlantic maritime route to the Spanish Canary Islands is on track to be the highest annually since 2006. But improvements to the reception system have for the most part averted the sense of crisis and the rise in xenophobia and hate crimes that engulfed the archipelago last year.

The migration season to the Canary Islands is now in full swing, and around 16,800 people – mainly from Morocco, Mali, Senegal, and other West African countries – have already made the journey in 2021: a more than 44 percent increase compared to the same period last year.

Over 880 people are known to have died attempting the crossing so far this year – surpassing the total for all of 2020 – and more than 1,000 others have potentially perished in so-called invisible shipwrecks. 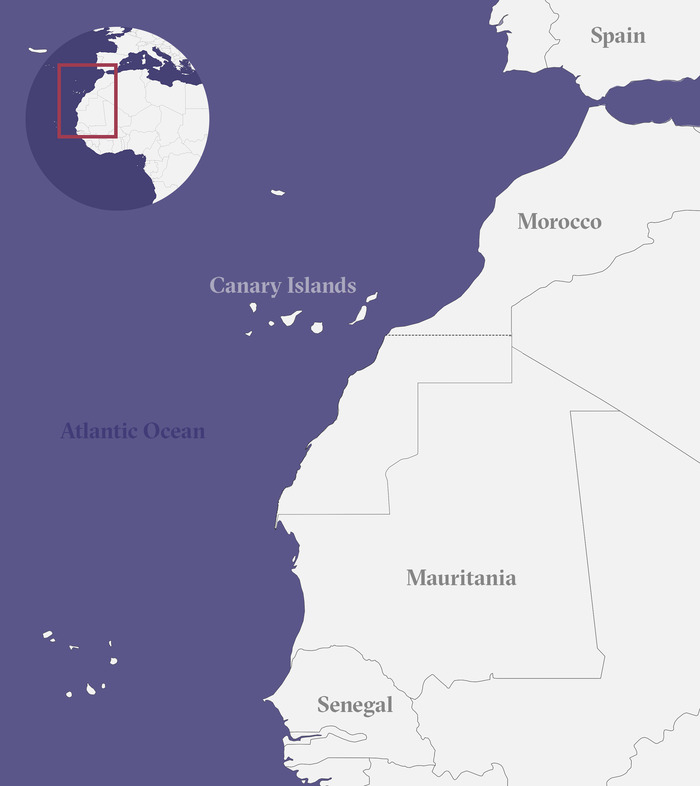 After the route had been mostly dormant since 2006, more than 23,000 asylum seekers and migrants reached the Canary Islands by boat in 2020 – driven by the economic impacts of the COVID-19 pandemic, pre-existing environmental crises, and an EU-backed crackdown on migration along Morocco’s northern coast. Movement on the route peaked in October and November last year, with nearly 13,500 people arriving in those two months alone.

This year, arrival numbers are higher overall. But although they’ve been steadily increasing since August – when calmer weather begins to make the crossing less dangerous, through the end of the year – there hasn’t yet been the same sudden spike that occurred in 2020.

The fact that the arrivals have been more spread out has made the situation easier to manage, according to Txema Santana, who works as an immigration adviser to Esther González, vice president of the Canary Islands’ regional government. But the big difference, he said, is the change in approach by Spanish officials. “The response of the Government of Spain has been radically different from last year,” Santana told The New Humanitarian.

Last year’s increase caught officials unprepared. Reception facilities had been dismantled when migration ebbed after 2006. And as arrivals rose in 2020, the authorities quickly ran out of room to house people. At the same time, the Spanish government prevented asylum seekers and migrants from travelling to the mainland, leading to a rapid pile-up.

Populist politicians and sensationalist media coverage stoked a sense of crisis, leading to an increase in hostile attitudes towards asylum seekers and migrants, and even physical attacks, Lorenzo explained.

Tensions subsided as arrivals declined during the first months of 2021. New reception facilities with more capacity opened in March, and a court ruling in April forced the government to allow some asylum seekers to travel to the mainland.

Now, people are periodically being transferred to the Spanish mainland to prevent overcrowding, the local government has implemented better health protocols to manage arrivals and mitigate the threat of COVID-19, and the economy has started to recover – all of which has helped improve the situation, according to both Santana and Lorenzo.

Human rights organisations, such as CEAR and Amnesty International, say poor management of migration reception contributed to last year’s rise in racist attitudes and even to hate crimes towards asylum seekers and migrants. The Spanish government’s new approach to managing arrivals appears to be reducing tensions, but migrant rights advocates warn that underlying issues still exist.

"Objectifying people by subjecting them to a poor and painful reception sparks xenophobia. Efficient management of the emergency reception is essential," said Santana, who was a journalist and activist before working for the government.

Under normal circumstances, when asylum seekers and migrants arrive in the Canary Islands, they can be detained in closed facilities for a maximum of 72 hours before being sent to reception centres.

How community groups are helping migrants in the Canary Islands

But as arrivals last summer began to outpace the capacity to house people, hundreds – and then thousands – were detained in a makeshift camp in a port on the island of Gran Canaria, sometimes for weeks.

Cramped, unsanitary living conditions, a lack of freedom of movement, and the inability to access legal support or information about asylum drew criticism from international human rights organisations, and a Spanish ombudsman called for the camp to be closed due to potential human rights violations.

Videos and photos of the crowded camp provided fodder for right-wing politicians and people on social media to push a sensational narrative that the islands were facing an “invasion”.

At the end of 2020 – as a temporary fix until new, quickly built camps could open in March this year – authorities began moving asylum seekers and migrants into some of the many hotels left empty due to the pandemic’s battering of the islands’ vital tourism sector.

It didn’t take long for discontent to bubble up among some residents who were frustrated that the government was paying to house asylum seekers and migrants in hotels while locals suffered from the COVID-related economic downturn.

Some residents began organising anti-migrant protests while, in certain areas of the islands, others began forming anti-migrant vigilante groups through WhatsApp and threatening violence. A video of a man driving around Gran Canaria threatening asylum seekers and migrants with a machete underscored the severity of the situation.

Even though the hostility has subsided this year, it hasn’t entirely gone away, according to 10 Moroccan and West African asylum seekers and migrants who The New Humanitarian spoke to between April and July on Gran Canaria and Tenerife.

A 19-year-old from Morocco recalled an incident one afternoon in April when a car came screeching to a halt next to him. The men inside began yelling racist slurs at him and his friends in Spanish. “I was very angry,” he said.  “I thought, ‘Why? I am Moroccan, and you are Canarian; it doesn’t matter’.”

The young man, who said he had arrived in the Canary Islands in January hoping to find work to support the education of his three younger siblings, asked not to be named because the manager of the reception facility where he was staying had threatened to kick asylum seekers and migrants out if they talked to the media.

Xenophobia and racism in the Canary Islands

Eight others all said they had either personally experienced xenophobia or racism – in the form of verbal abuse and physical assaults – or they knew someone who had. One said the situation was improving, while the other seven were relatively new arrivals and couldn’t comment on how things had changed.

A 41-year-old Nigerian man who asked to be called Innocent Ujah Idibia – the name of a famous Nigerian musician – said the sense of not being welcome was still palpable.

He left Nigeria after the army violently cracked down on protests against police brutality in October 2020 and arrived in the Canary Islands in January 2021. When The New Humanitarian spoke to him in July, he had been sleeping in a makeshift encampment on a beach on the island of Tenerife for four months. “[Locals] are segregating from this person who is not their fellow white. That is the nature I am seeing,” he said.

While actions and attacks by private citizens have garnered much of the attention, academics and activists say more focus should be paid to institutional racism, which, they argue, is baked into Spanish migration policies; in particular to the government’s response to the increased arrivals to the Canary Islands in 2020.

As evidence, the academics and activists point to: poor living conditions in the quickly constructed reception centres; the efforts last year to keep migrants from travelling to the mainland; the fact that more than 4,000 Malians escaping conflict in their country were blocked from applying from asylum for almost a year; and the general exclusion of migrants from being able to access social services, including medical care.

“There are problems at the institutional level because the government blocks the possibility of leading a normal life and also continuing with your trip. They just want to deport [the migrants],” said Antonella Aliotti, a municipal council member on the island of Tenerife from Podemos, a junior partner in Spain’s Socialist-led coalition government.

The Spanish interior ministry, which is responsible for migration policy, did not respond to The New Humanitarian’s requests for comments on the allegations of institutional racism in the Canary Islands.

Problems on other islands

For now, the reception system on Gran Canaria, where most of last year’s events took place, seems to be accommodating the number of people arriving without major issues, and tensions remain low.

However, other Canary Islands – such as Lanzarote, El Hierro, and Fuerteventura – are seeing an uptick in arrivals this year and don’t have the infrastructure to receive them.

Conditions there are reportedly reminiscent of the situation on Gran Canaria last year, with people sometimes held in crowded, makeshift camps in ports and industrial warehouses for longer than 72 hours, and with limited access to water, sanitation, and legal services.

Lorenzo, from CEAR, told The New Humanitarian there had also been more flare-ups of xenophobia and hate speech on these islands, but he added that the government was working to build new centres and improve procedures on them as well.

Adnan Abdaime, secretary of the Moroccan Sand Association in the Canary Islands, a community group representing Moroccans on the islands, told The New Humanitarian he was worried that the events of the past two years have stirred up deeper issues.

“Before all this, there were no groups who hit immigrants or made songs that incited hatred and violence [against asylum seekers and migrants]. But there have been a lot of these practices throughout this year,” Abdaime said. “I believe that xenophobic speech has changed the islands a lot.”

With research support from Sharron Lovell in Beijing.