Beyond the bang-bang: Reporting from the front lines of peace. This article is part of our peacebuilding coverage, reporting on how atrocities can be prevented, how societies can be made more resilient, and how peace can be sustainably built.
BANGUI

At least 100,000 people have fled their homes in Central African Republic as a rebel coalition calling for the resignation of the president launches attacks around the county, throwing into question almost two years of peace efforts.

The capital city, Bangui, has come under fire and major towns are occupied by the coalition of some of CAR’s strongest rebel groups, which formed shortly before December elections won by President Faustin-Archange Touadéra but contested by the opposition.

By capturing the western town of Bouar, the rebels – known as the Coalition of Patriots for Change, or the CPC – have cut off the main trade route linking Cameroon to Bangui. Other roads leading to the capital have also been seized in what could be a strategy to “asphyxiate” the city, according to Hans De Marie Heungoup, a Central Africa analyst at the International Crisis Group. 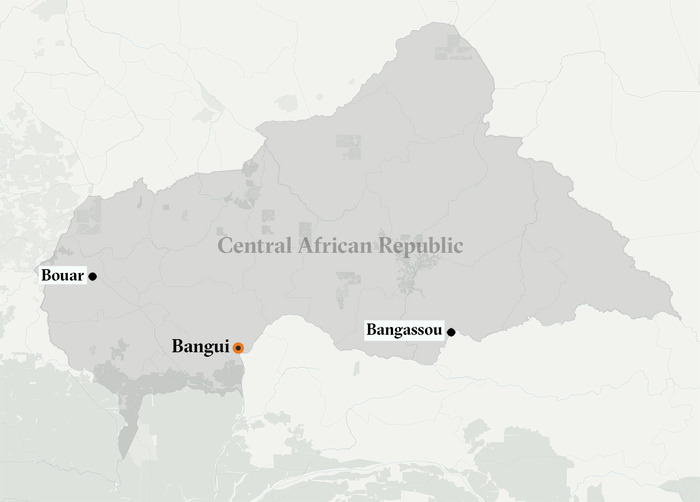 Juan-José Aguirre Muñoz, the bishop of Bangassou, estimates that 80 percent of the southeastern town’s population left their homes – many fleeing across the border to neighbouring Democratic Republic of Congo – when the CPC attacked it earlier this month, before withdrawing last weekend.

Muñoz said the latest offensive came just as life had begun to return to normal in Bangassou, a town hit hard by conflict in recent years. “This coalition puts fear back in our stomachs,” Muñoz told The New Humanitarian. “We want to be able to continue our projects of social cohesion, our projects for the future.”

The UN’s refugee agency, UNHCR, said 60,000 people have now fled to neighbouring countries due to the latest fighting, and 58,000 more have been internally displaced within CAR, which already has some of the highest humanitarian needs per capita of any state in the world.

The new offensive highlights the weakness of international efforts to stabilise CAR through an African Union-brokered peace agreement signed by 14 armed groups – including those involved in the CPC – in Sudan’s capital, Khartoum, in February 2019.

The agreement – the eighth attempt to resolve a shifting crisis that began here in 2013 – had until the recent offensive helped to bring down overall levels of violence. But key parts of the deal have not been implemented, and rebel abuses have continued across the country.

Some armed group leaders who obtained government postings as part of the peace agreement have now been removed from their roles because of their involvement in the CPC.

Igor Acko, an independent Central African researcher, told TNH the goal of the rebel groups “was never to apply this [peace] deal”, and that controlling parts of the country brings them benefits greater than anything included in the accord.

Rebels generate significant revenues in the country by illegally taxing local populations, trafficking gold and diamonds, and levying additional taxes on those involved in the supply and production of the minerals.

In interviews with TNH, residents in towns attacked by the CPC described tense situations. In Bangassou, roughly 700 kilometres east of the capital, inhabitants said rebels were moving around freely, but this was before the UN peacekeeping mission, MINUSCA, claimed on Sunday to be in control of the town.

In Bouar, a father of five who only gave TNH his first name – Yvon – said the population “lives with fear” since rebels took control on 9 January. “Nobody is protected for the time-being,” he said. “If the armed groups had the intention of doing wrong, there would be no one to stop them.” 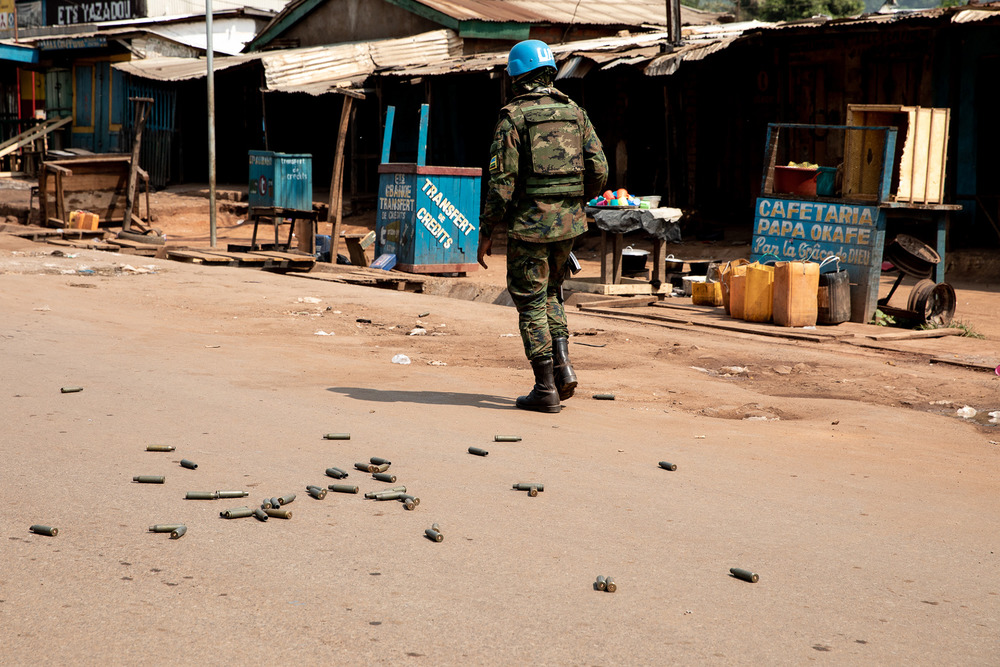 Adrienne Surprenant/TNH
The aftermath of a rebel attack on the outskirts of Bangui. Food shortages have been reported in the city since an outbreak of post-election violence.

On 13 January, the rebels launched coordinated attacks on the northern and western outskirts of Bangui using rocket-propelled grenades, machine guns, and mortars. They were repelled after clashes with UN peacekeepers and Central African troops, who are supported by Rwandan soldiers and Russian military instructors.

On a visit to one area where fighting took place, TNH found bullet casings and the corpse of a rebel fighter lying by a house as residents fled their homes, their belongings stuffed into bulging sacks. Market stalls lay abandoned, with fresh produce discarded in the streets.

Tatiana, a 36-year-old from a Bangui neighbourhood where clashes took place, said she woke up to the sound of gunshots as rebels occupied positions between people’s houses. “We could only hide in our houses and wait,” she told TNH during a lull in the fighting.

Marina Serdangamo, a 31-year-old from the capital, said she walked for four hours with her eight-year-old son to escape the fighting. She is now living with family members in the centre of Bangui and has trouble sleeping at night. “I can’t go back [to my neighbourhood],” she said. “I’m too scared it starts again and continues.”

Bangui residents are also living under a night-time curfew that has left many workers struggling to make ends meet. Motorbike taxi drivers – usually omnipresent in the capital – have been told to stop working altogether for security reasons.

Market stalls in Bangui, meanwhile, lie half empty. The price of goods has soared as hundreds of trucks remain backed up at the Cameroonian border town of Garoua Boulai – unable to cross because of the rebel presence along the main highway.

Two convoys of trucks did leave Bangui for Cameroon in recent days after the government said it would use soldiers to secure a supply corridor with the support of peacekeepers.

Some Cameroonian truck drivers told TNH they had been stranded in Bangui for a month and were considering flying back home. They may now be counting on being part of the next convoy.

The CPC was formed on 19 December, a week before the legislative and presidential elections.

Insecurity on voting day meant just 35 percent of registered voters were able to cast ballots, according to CAR’s constitutional court – in some locations, electoral papers were burned and polling stations were forced to close. 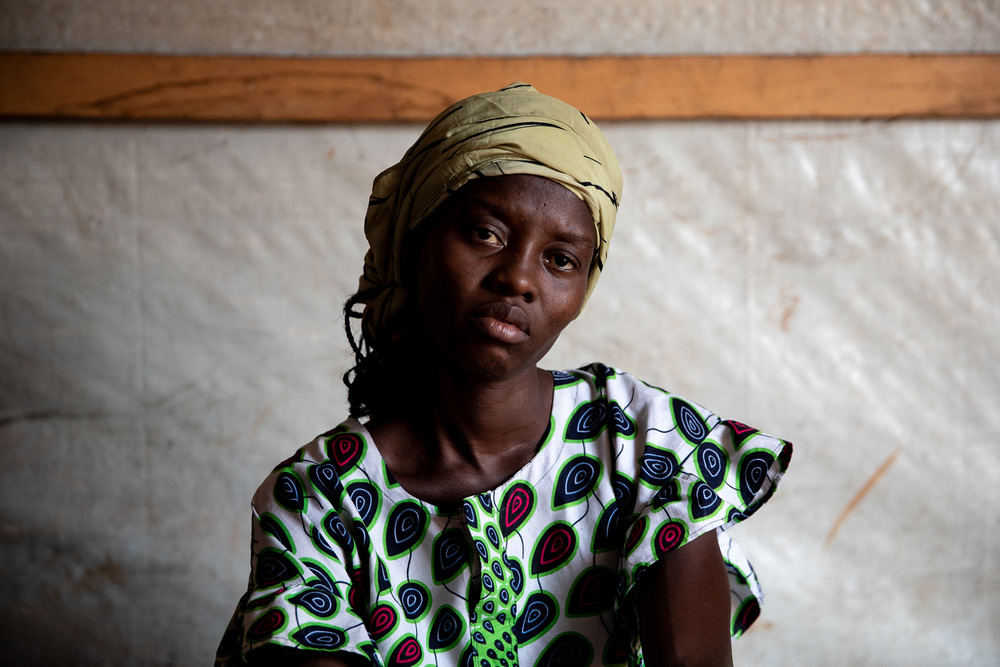 Adrienne Surprenant/TNH
Marina Serdangamo has struggled to sleep since fleeing her home following recent clashes in Bangui. “I’m too alert,” she said. “When I wake up, I can’t stop thinking about my situation.”

Opposition presidential candidates had demanded an annulment of the result, arguing that the polls “were not fair or inclusive”. But on Monday the constitutional court confirmed Touadéra as the winner with 53 percent of the vote.

Though the precise goal of the CPC remains unclear, Acko, the independent researcher, said the rebels might have ambitions that go beyond challenging the electoral results. He said the offensives in the countryside may be designed to increase the rebels’ negotiating power to secure a new deal with the government on more favourable terms, or even to expand their economic zones of influence in order to finance a full-scale assault on Bangui.

The CPC features an unlikely alliance of groups, some of which have fought each other in recent years. Among them are armed groups from northern CAR that previously made up the Séléka – the alliance that overthrew the government of François Bozizé in 2013, triggering years of conflict. It also includes anti-Balaka militias, which Bozizé is suspected of having helped set up in 2013 to fight the Séléka. The ex-president, who was barred from running in December’s polls by the constitutional court, is now under investigation by the public prosecutor's office for supporting the CPC.

“[The coalition] originally did not share much common interests,” said Heungoup of the International Crisis Group. “They were divided by community cleavages and were more attached to either the control of transhumance routes, mining resources, or, for others, closer links to Bozizé.”

Ange Maxime Kazagui, the government’s spokesperson, told TNH the current administration is stronger than it was in 2013, when the Séléka entered Bangui with relative ease.

“There is resistance from our side and, above all, we are no longer alone, we have friendly countries by our side,” Kazagui said.

Though Russian military instructors sent to secure the elections are set to leave CAR, the government is supported by the Wagner Group – a paramilitary organisation linked to Russian President Vladimir Putin – as well as Rwandan troops. Thousands of UN peacekeepers are also deployed in the country to protect civilians. 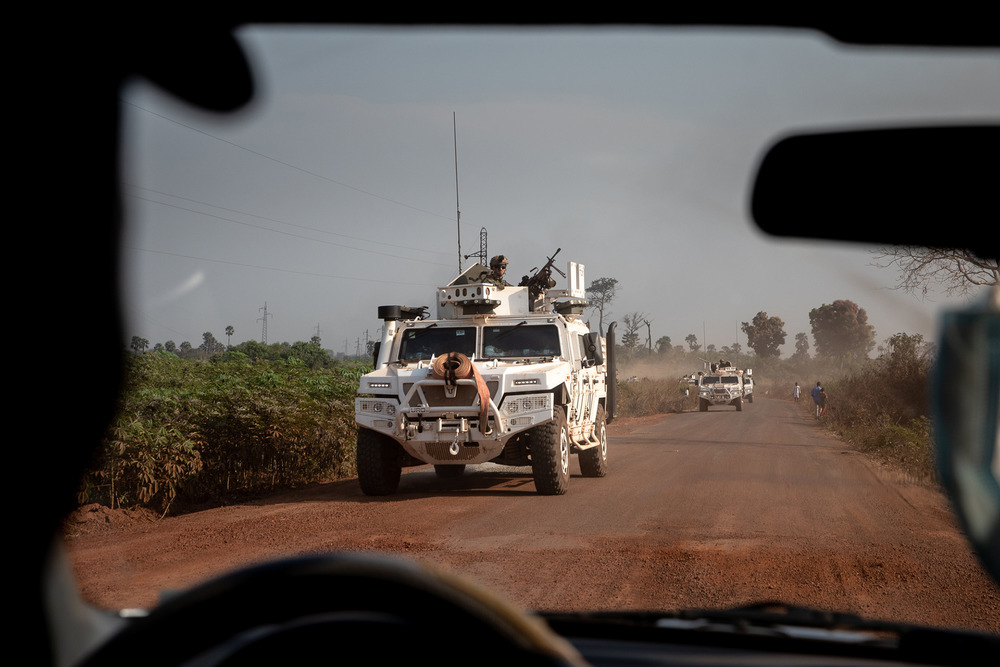 Adrienne Surprenant/TNH
A contingent of UN peacekeepers patrols the road northwest of the capital. Violence linked to contested elections has displaced more than 100,000 people since December.

Still, reports of Central African troops fleeing combat have circulated, leading to 700 soldiers being relieved of their duties last week.

As the recent string of attacks has escalated, the situation for civilians – in a country where one in four people were already either internally displaced or living as refugees abroad – has worsened.

Bruce Bieber, the International Committee of Red Cross’s head of delegation in CAR, told TNH the violence has made it harder to access populations in need of humanitarian assistance, with some areas cut off from the rest of the country for the past four weeks.

“The big change is that there is more mobility of the armed groups,” Bieber said. “It has made it more complicated to access and ensure a safe passage.”

On 27 December, the ICRC’s base in Bouar was ransacked by rebels – one of more than 40 incidents targeting humanitarian personnel since 15 December, according to a statement from the Norwegian Refugee Council.

In Bangassou, a local hospital is hosting around 2,000 people, while a site just outside the town has become the refuge for around 10,000 others who fled their homes.

In Bouar, more than 5,000 people are displaced in various sites that lack access to water sources and latrines, according to a priest from a seminary hosting displaced people.

The priest, who asked not to be named, said some people have tried to return to their homes in recent days, thinking the conflict might end.

“Sometimes, they try to go home,” said the priest. “But then they come back in a hurry.”